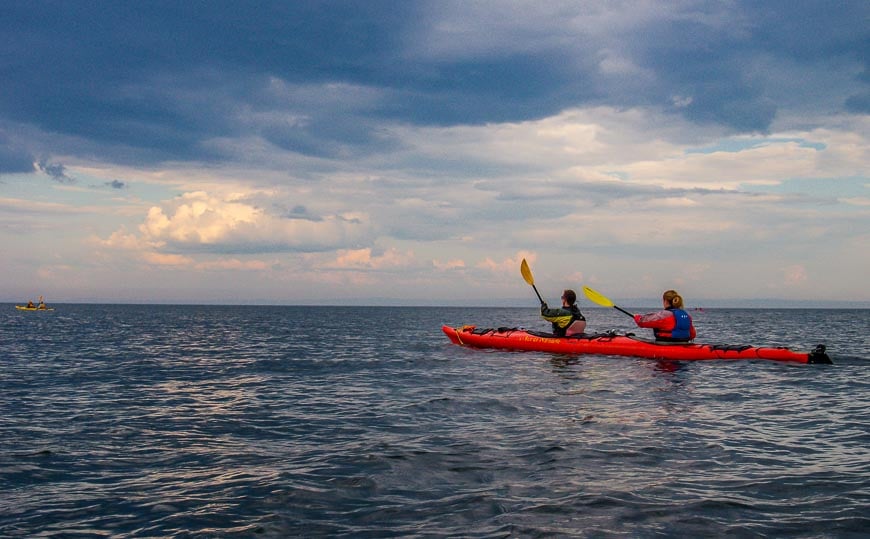 I have dreamed of kayaking with whales in the St. Lawrence River for years. The Saint Lawrence River in particular is an incredible place to see a huge diversity of whales – with the beluga whale being just one of 10 whale species that inhabit these waters.

When you go kayaking with whales in the St. Lawrence River, you have the chance of seeing 13 different types of whales and porpoises or dolphins, an unbelievable cross-section in both categories of whales – toothed and baleen.

In the toothed whales category the ones you might see include: killer whales, sperm whales, the northern bottlenose whale, long-finned pilot whales, beluga whales, the white-beaked dolphin or white-sided dolphin and harbour porpoises.

In the baleen whale category the species to look for include the blue whale – the largest animal on the planet, fin whales, minke whales, humpback whales and the North Atlantic right whale.

Guess which whale I saw?

It was a baby blue whale that I saw – though it was off in the distance and so there were no worries about it flipping kayaks – not that that’s a normal occurrence or something I ever even worry about. Still, pretty cool in my books.

A kayaking tour with whales with Mer et Monde

I had signed up for an evening tour with Mer et Monde Ecotours out of Les Bergeronnes, a small dot on the map north of Tadoussac on the St. Lawrence River.

They have a superb set up if you’re into camping. Prime tent sites sit on the rock with expansive views of the St. Lawrence River. Needless to say you have an excellent chance of seeing whales swim by your campsite from the comfort of your sleeping bag.

I wasn’t planning to camp so I showed up just in time to get the safety lecture and get properly attired in a wet suit, booties, paddling jacket and a life jacket. I was a little taken aback at the sheer number of people there to kayak – though granted it was summer time and a perfect evening for it.

People were divided into groups – depending on what language you spoke. After a full hour’s orientation we were ready to hit the water – which entailed helping to lift and move kayaks down to the shore – really the hardest part of the evening.

Over the next three hours we paddled up and down the coast – pausing for long stretches when we heard a blow or saw whales off in the distance. Some kayakers – out of sheer luck – were marvelously situated to take advantage of whales surfacing just feet away. Unfortunately I wasn’t in that group.

But it was such a pleasant night to be out – with truly outstanding lighting – that I was happy enough to just enjoy the paddling.

Even though we started off as one large group it wasn’t long before we were spread up and down the coast – each group with their own guide – so you never felt like you were on top of each other.

I’d spoken to someone earlier in the day who had done an all day trip with Mer et Monde. She came away raving about the experience because they’d seen so many whales – and many had come very close to her kayak.

If I were to do it again I’d allow for a full day and I’d bring a waterproof dry bag so I wouldn’t have to fret about destroying my camera. That’s one thing Mer et Monde didn’t offer – a drybag – which is unfortunate because kayaking near whales for many people is a once in a lifetime experience. I think many people would like to capture that experience.

It was quite wavey on the night we were out and so I only pulled my camera out on a couple of occasions – hence the reason for a lack of even a fin shot of a whale.

I still haven’t seen a beluga whale in the wild. Perhaps one day I’ll make it to Churchill, Manitoba and there not only do you see beluga whales but you can snorkel with them too. 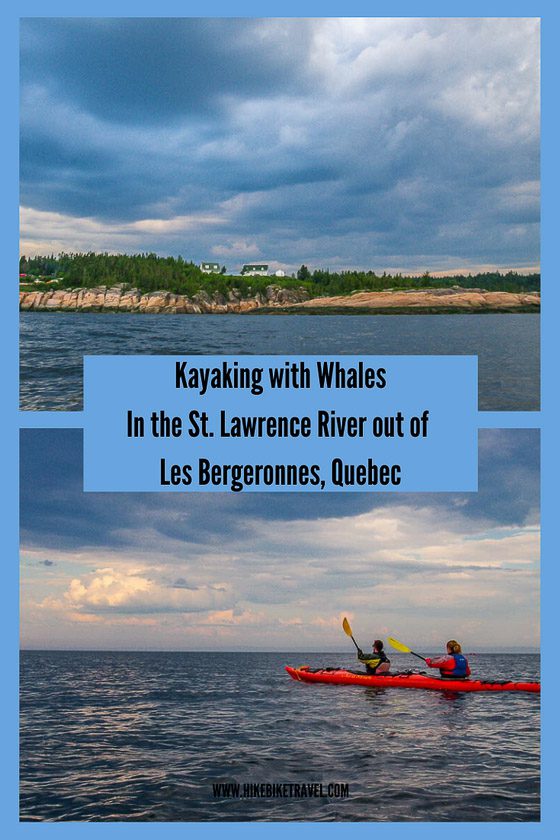