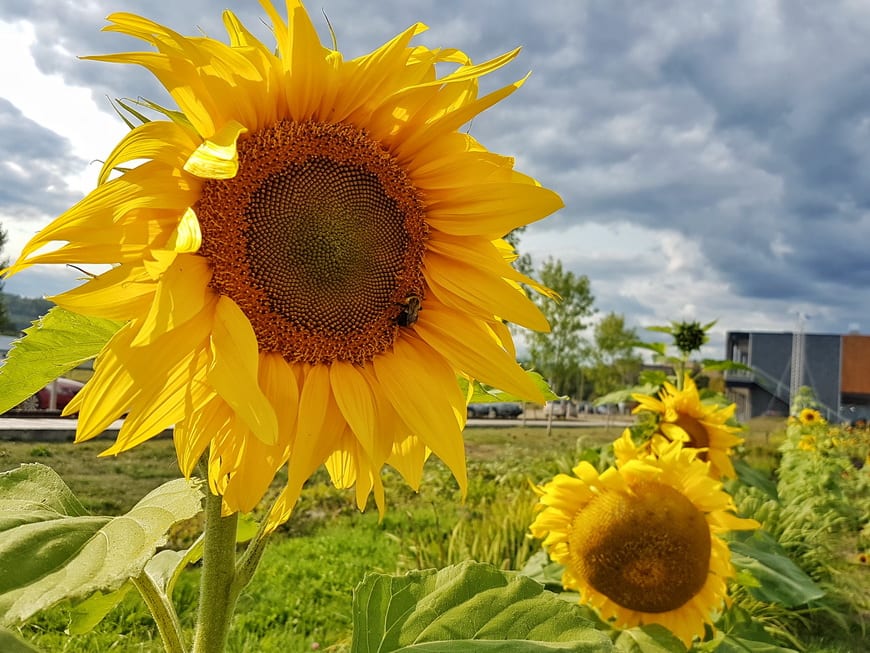 The scenic Charlevoix region has long been served by trains from Quebec City – but with hiccups along the way. Service has stopped, sometimes for years at a time. Today the Charlevoix Train is very much in existence offering seasonal train trips between Beauport and La Malbaie with numerous stops along the way.

The Charlevoix Train follows the north shore of the St. Lawrence River for 125 km with views of the river, cliffsides and a part of the landscape that you’d never be able to see from the road.

The train is a great way to get to towns like Baie St. Paul and La Malbaie without renting a car or taking a bus. You can do a return trip in a day to one of the towns along the route – with an hour or two layover.

That’s enough time to explore or dine on some of Charlevoix’s renowned cuisine. But you can also use the train simply as a means of transportation, albeit a scenic one.

Our group of three opted to take the Charlevoix Train from Beauport, a 15 minute drive from Quebec City to Baie St. Paul – where we were picked up to start our week-long hike called the Charlevoix Traversé. The train trip was one of the highlights of our trip.

Insider tip: We were to be at the train station by 8 AM but from all appearances the gate to allow access into the area is closed. There are no signs saying otherwise BUT if you drive up as far as you can without taking out the gate, it will magically open. We had to get on the phone with our Uber driver on the return as he had the same problem.

The 2¼ hour train ride is a scenic one. It starts in Parc de la Chute-Montmorency within sight of 83 metre high Montmorency Falls. These falls are 30 metres higher than Niagara Falls! If you want photos of the falls take them before you get on the train.

As you head in the direction of La Malbaie you can’t help but notice Île d’Orléans off on the right side of the train. The 34 kilometre long by 8 kilometre wide island is known for its farm stands and strawberry fields.

In short order you arrive at the municipality of Saint-Anne-de-Beaupré. The shrine of Sainte-Anne-de-Beaupré, a world- renowned pilgrimage site, is famous for miracles and that may be part of the reason it welcomes about a million visitors every year.

Shortly after leaving Saint-Anne-de-Beaupré you enter the Cap Tourmente Wilderness Reserve. Look out the window for some of the 180 species of birds that fly through here. My husband noticed a peregrine falcon that had perfected the art of seizing the birds the train had flushed as the train moved along the tracks.

At Cap-Rouge the train enters a 122 metre tunnel, built largely by WWI prisoners over the course of seven years beginning in 1926. It is named for the colour of the rock.

In Petite-Rivière-Saint-Francois within sight of Le Massif de Charlevoix (a fabulous ski resort) many of the families in the area own a sugar shack – reportedly “the prettiest and most typically Quebecois in the province”, in large part because the microclimate supports a large number of maple trees.

Baie St. Paul is most definitely worth a visit. It’s a real artist’s paradise with lots of galleries and locally run shops. The pretty main street also boasts lots of outdoor patios in summer – and everything is just a 10 minute walk from the train station.

Two of the towns the train travels through include Les Éboulements with mountainside homes enjoying superlative views of the St. Lawrence River and Saint-Irénée boasting some of the loveliest beaches in Charlevoix. These towns are part of a group of 38 towns considered to be the most beautiful villages in Quebec. Unfortunately we missed them on this trip because they’re located between Baie St. Paul and La Malbaie.

La Malbaie is the end of the line for this train. Enjoy a meal, wander around or perhaps spend a few nights in this pretty town at the junction of two rivers.

You can book hotel through the affiliate links which means I receive a small percentage if you purchase at no extra cost to you. This helps me provide free content on this site. Thank you.

If you plan to spend some time in the Charlevoix region you have a couple of top-notch, high-end choices when it comes to accommodation.

Also, although we had large backpacks we opted not to spend $5 per bag until we got to the train to see if it was even necessary. It wasn’t as there is a roomy overhead area above the seat.

If you’re traveling with a large suitcase I would recommend spending the $5. You pick up your bag after you disembark. 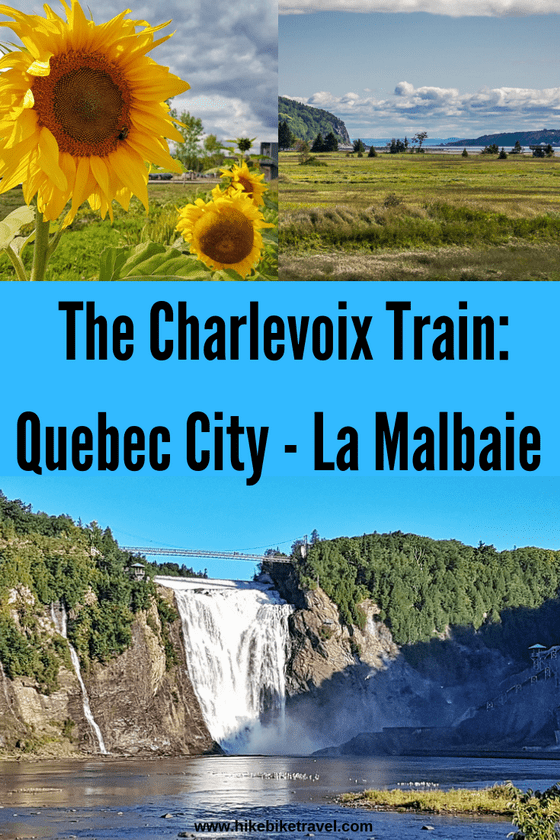