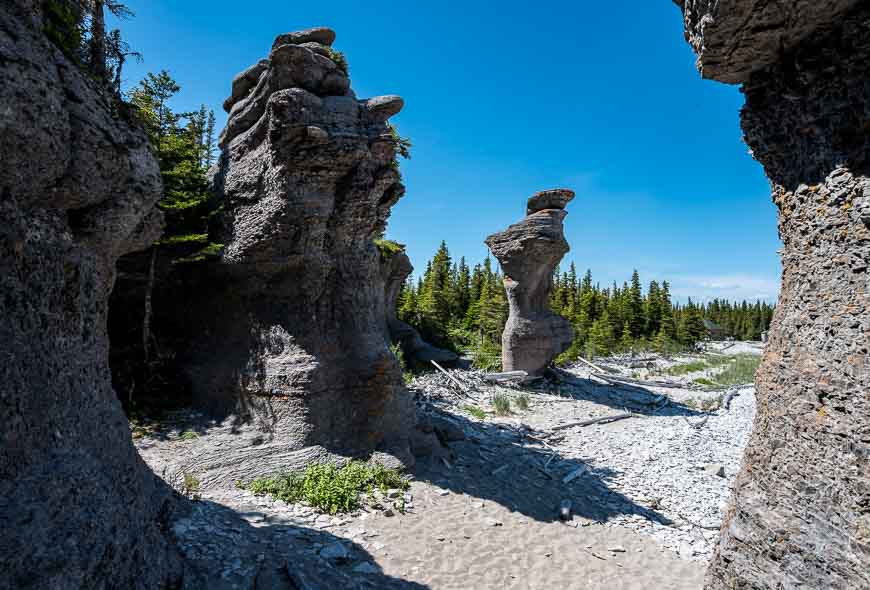 For years the Mingan Archipelago National Park has been on my bucket list. I first heard about the park when I started researching places to include in my book on 100 adventures across Canada back in 2013.

Kayaking through an archipelago of over 1000 islands that make up Mingan Archipelago National Park sounded like a magical adventure to me. Unfortunately the kayaking company I’d looked at shuttered its doors, and there was no replacement for years. So I nixed any plans to go.

Fast forward to July 2019. I along with two other travel writers/photographers visited the islands at the invitation of Parks Canada over a three day period. It was enough time to give me a taste of what they offered – and it was way more time than many of the 30,000 annual visitors spend. Still the visit has just whetted my appetite for more, in particular hiking, kayaking and birding.

Click on this video to get an idea of the treat you’re in for.

This national park is a reserve

Established as a park in 1984, the encompasses almost a 1,000 islands and islets scattered off the coast of eastern Quebec.

It’s a unique destination with its abundance of large limestone monoliths that date back some 450 million years. Carved by nature, these fantastically shaped rocks are one of the big reasons to visit the park. Nowhere else in Canada will you see such an abundance of these rocky sentinels.

The islands are equally famous for their seabird population. The common eider is the most abundant species in the park but the one that people come specifically to see is the Atlantic puffin. The birds arrive sometime in April and are gone by September. An overnight stay in the lightkeeper’s cottage on Île aux Perroquets will allow you to watch their comings and goings for hours.

The marine life is also excellent. The Gulf of St. Lawrence is the home of numerous whale species including the endangered blue whale. You can learn a lot more about the whales with a stop at the Mingan Island Creatacean Study in Longue-Pointe-de-Mingan.

We were lucky enough to see minke whales on several occasions – and though I have no photos I did catch a few seconds you can see on the video.

Where is the National Park Reserve?

The park stretches along the north shore of the Gulf of St. Lawrence in eastern Quebec – near the end of Highway 138. The closest big centre is Sept-Îles, a 2.5 hour drive away while Quebec City is a whopping 860 km away.

Two towns that provide boat access to the park include Longue-Pointe-de-Mingan and Havre-Saint-Pierre.

How do spend three days in the Mingan

Our group was fortunate to visit five islands over the three days. On three of the islands we only had an hour or two but that was enough time to wander around, take pictures, poke our noses in tide pools and visit lighthouses. We spent a night on two islands – in an oTENTik on Quarry Island and in a wonderful lightkeeper’s cottage – with hot showers and delicious food on Île aux Perroquets.

Visit Île Niapiskau to see numerous monliths including once called Bonne Femme. If you’ve got time there are two trails to hike, one a short 0.3 km loop on Poète Jomphe Trail and the other a 4.4 km hike on the Samuel Trail. There is also camping on this island.

We had less than an hour to wander around, thinking that we’d be coming back again. But plans changed so I’m glad we were able to see these fantastic monoliths.

In English this island is called Naked Island. While it does look bare, it doesn’t mean that it isn’t brimming with life – especially seabirds. It’s also home to many lovely monoliths including the highest one in all of the islands – La Montagnaise standing a little over 10 m high. If you visit at low tide there are fabulous tide pools to explore.

Îlot next door to Île Nue de Mingan is filled with limestone caves – many of which we could see from the boat. The area is literally filled with seabirds – flying every which way, squawking, swimming and making their presence known.

You can see Petite Île au Marteau from Havre-Saint-Pierre. It’s quick and easy to get to and one of the few islands that is accessible for disabled people.

Catch your red chair moment. Walk the trails to the lighthouse. Step back in time as you enter the lightkeeper’s cottage. Explore the multitude of tidal pools. And look for numerous common eiders and herring gulls that nest on the island but don’t disturb them.

Try to spend a night on Quarry Island. It’s home to six oTENTik tents and eight campsites, lovely stretches of beach, beautiful forest and a fabulous network of hiking trails covering about 15 km of the island. There’s enough to keep you busy for several days!!

Be sure to hike the shore trail as a loop via Les Falaises trail. That way you get a great combo of the boreal forest and spectacular monoliths. Don’t wimp out on the climb up to the viewpoint in the forest because on a clear day you may even see Anitcosti Island.

If you want to spend hours watching puffins, then plan a visit to Île aux Perroquets. This island is one of the best for viewing them, especially in July when their numbers are highest.

Île aux Perroquets is a small island crammed with history from the years of people tending to the lighthouse. And it’s got wonderful rooms you can book in the Lightkeeper’s Cottage. Throw in drinks and appetizers in the former hen house, old fashioned rockers, the chance to climb to the top of the lighthouse, superb food and you have one heck of a place to spend a night or two.

The best time to visit the Mingan

Plan to visit the Mingan in the summer between June and early September. It’s a short season with the boats only operating during the summer. August would be a great month from the perspective of fewer bugs. But July is better for puffins.

Getting around the Mingan Archipelago

You need a boat to get to the islands in the Mingan. While some people show up in the islands having paddled over in their own kayaks, the majority of people book a boat tour or a boat taxi. Out of Havre-Saint-Pierre you can book an excursion to various islands with Services Maritimes-Boréale. They also offer a taxi boat for campers and hikers.

You can also leave for the western most islands out of Longue-Pointe-de-Mingan. There are two companies, both offering sea excursions with stopovers and taxi boats to the islands for hikers and campers. Check out Enterprises touristiques Loiselle or Excursions du Phare.

Note: If you’re doing your own kayaking trip you should be competent at reading charts, understand the currents and the risks of what you’re doing. As one Parks Canada person said to me “the weather is either outstanding or horrible. There is no in between.” Go very prepared.

Camping in the National Park Reserve

It’s possible to stay overnight on a total of six islands. Île Quarry is the only one that offers the oTENTik experience and those should be booked through Parks Canada. If you really want to make your life easy book an oTENTik kit rental. That way you won’t need to bring much more than food and water.

You can also book 36 regular campsites online – though search “frontcountry” to get the options in the Mingan. The other islands that offer camping include Grand Île, Île à la Chasse, Île du Havre, Île Nue de Mingan, Île Quarry and Île Niapiskau.

Kayaking companies working in the Mingan

Should you prefer to see the Mingan via kayak there are now a couple of choices. For a local company check out Noryak Adventures based in Havre-Saint-Pierre. Montreal based Chinook Adventure and Quebec City based Quatres Nature are your other two options.

***A giant thank you to Guy, Suzie, Parks Canada and Quebec Maritime for hosting my stay. I fell in love with this park, just like I thought I would.***

More reading on places to visit in Quebec 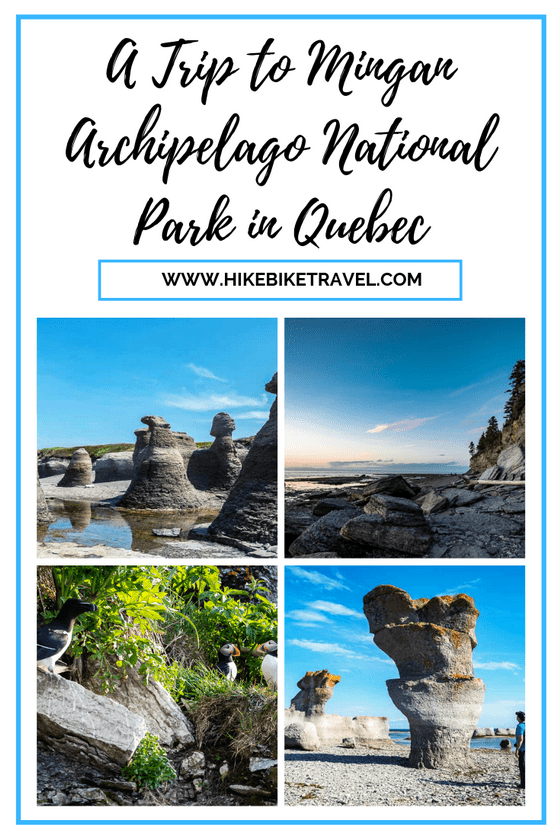 Lighthouse Stay in the Mingan Archipelago