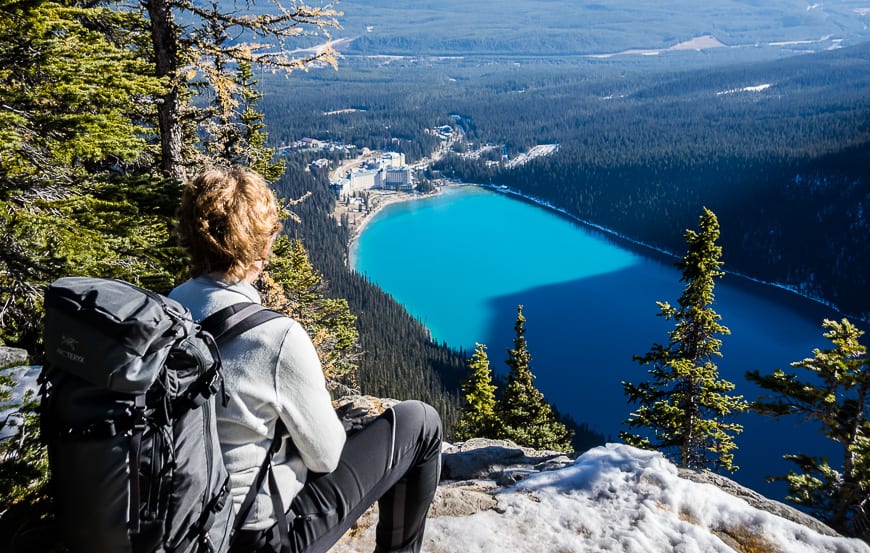 The Lake Agnes – Big Beehive hike delivers world-class mountain scenery. Normally the hike to Lake Agnes Teahouse is a ridiculously busy one, especially in the summer. But we elected to do the Big Beehive hike in the third week of October, a couple of weeks after a particularly big, early season snow storm, so the number of hikers was way down.

Starting early always helps but on this occasion the trail to Lake Agnes was also like a skating rink early in the morning. Lots of people turned back unless they had brought “icers” with them. By the time we got to Lake Agnes and the start of the Big Beehive hike, the sun was melting snow and the going was much easier.

Finding the trailhead to Lake Agnes and the Big Beehive hike

The 10.3 kilometre return hike to the Big Beehive via Lake Agnes starts right at Lake Louise. To find the trail, follow the shoreline path west -northwest in front of the Fairmont Chateau Lake Louise. Look for a trail intersection and you’ll see signs at the north corner of the lake.

Go left and take the Highline Trail – with a hike up to Lake Agnes or stay right to reach Lake Agnes at the 3.1 kilometre mark after climbing a couple of sets of stairs by a waterfall.

This is also the route to reach the Little Beehive and Mount St. Piran. In the winter the final stretch before Lake Agnes passes a slope that gets loaded with snow – so there can be avalanche danger.

The Lake Agnes Teahouse was closed when we were there – much to the disappointment of some hikers we met later in the day. It opens early in June through until Thanksgiving weekend in October.

After stopping for a few photos at Lake Agnes continue in a southwesterly direction on a trail that follows the north shore of the lake. It’s easier walking now. An in October the trail is still very pretty with larches showing their fall colours.

The trail to Big Beehive is well-signed from Lake Agnes.

The trail curves around the west shore of Lake Agnes on a gentle grade. It was well stomped out when we did it and it would be equally obvious without snow. Switchback up the gully to reach a four way intersection.

To reach the Big Beehive go left. If you want to return via the Plain of Six Glaciers you would go straight to reach the Highline Trail. If its the challenging Devil’s Thumb you want to hike, turn right.

Once you’ve reached the intersection the climbing is over. Simply follow the trail through pretty woods – at times with some breathtaking views of Lake Louise all the way to the Big Beehive Lookout. There are lots of viewpoints around that make for a good lunch spot.

Getting back to Lake Louise

Retrace your steps to return to Lake Louise. Keen hikers might want to knock off Devil’s Thumb as well but with all the snow around I figured we’d come back and do it in the summer instead as there is some challenging scrambling involved.

There is also the option to hike to Little Beehive – by taking the trail above the Lake Agnes Teahouse and following the signs. That would at most add about an hour of hiking to the day, and if you’ve never been I’d recommend it.

Allow four to five hours to do the round-trip hike to Big Beehive. You’re not going to want to rush it with so many beautiful lookouts. 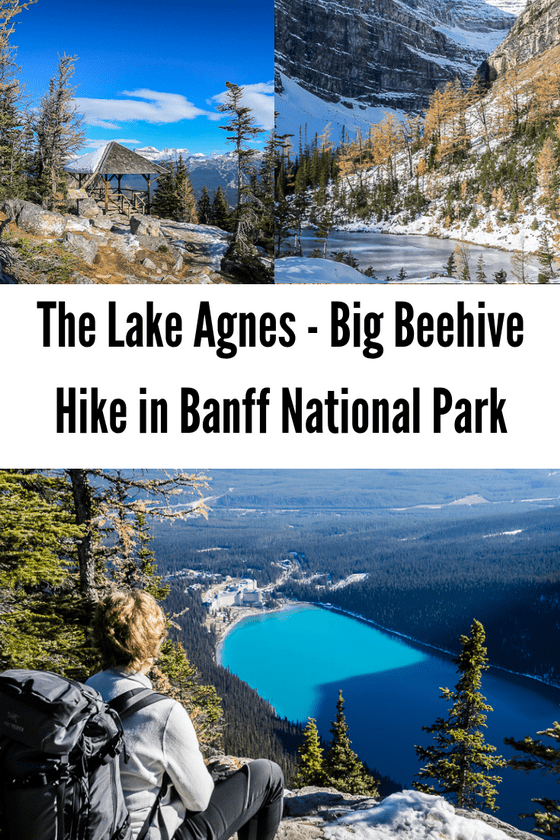 Himalayas, meaning "abode of the Gods" in Sanskrit, is a massive, absolutely awe-inspiring mountain range straddling…

Valhalla Provincial Park for One of the Best Hikes in BC

Valhalla Provincial Park is home to one of the best hikes in BC. The 6…