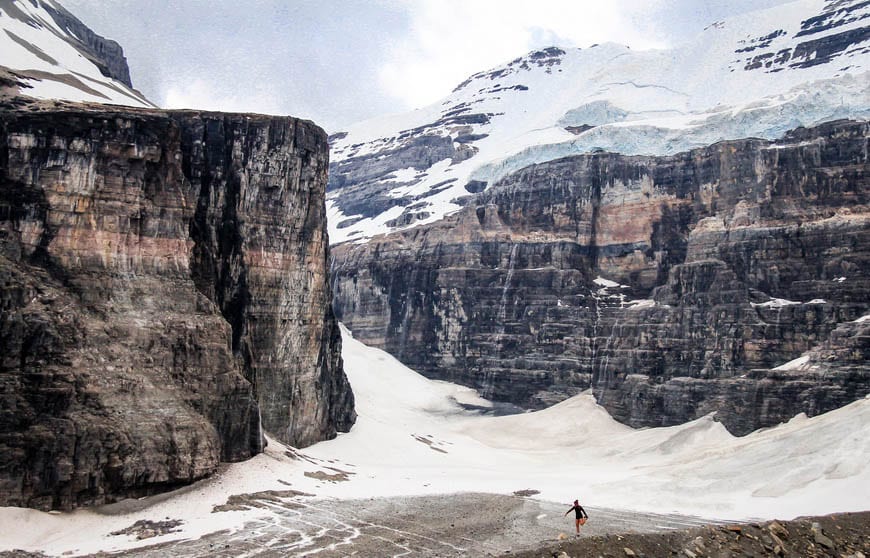 The Plain of Six Glaciers hike which ends near a tea house above Lake Louise is a beauty. But the crowds are there unless you pick your times – early mornings, late afternoons or in the fall when the crowds have dispersed. It’s an interesting hike because of the views it affords of Lake Louise from a different angle and the glaciers near the end point.

The hike to the Plain of Six Glaciers Teahouse starts on the path by the turquoise-coloured waters of Lake Louise. Initially you have to cut and duck through the tourists to get anywhere.

If you can get over that then you’ll be treated to the sights of Mt. Lefroy and Mt. Victoria along with six glaciers – some of which look like they could break off into pieces at any time. There are wildflowers around too – not in copious quantities but enough to add some colour to the hike.

And for you non-hikers, it seems you can climb up to the Plain of Six Glaciers Teahouse on horseback.

The hike to the Plain of Six Glaciers Teahouse

The trail to the Plain of Six Glaciers Tea House is well signed. Start by heading on the paved path to the right of Lake Louise – if you’re facing the lake. The trail hugs Lake Louise for the first two kilometres.

When you reach the cliffs at the end of the lake you’re likely to see some climbers. It’s fun to stop and watch them for a while.

There are a few intersections on the trail – all signed – so as long as you can read you’re fine. Basically you climb straight up the valley. For much of the hike you continue to see Lake Louise.

There is one section with a slight drop-off – hence the reason for the metal ropes, but really it’s wide enough that all hikers should be able to handle it.

The Plain of Six Glaciers Teahouse doesn’t come into view until you round a bend by a largish stream – 5.5 kilometres from the start of the trail. If you don’t have your heart set on eating at the Teahouse then bring a picnic lunch and park yourself on one of the benches and admire the sights.

From the Teahouse it’s reportedly another 1.6 kilometres to the high viewpoint. The last half kilometre or so was closed when I did it with a sign saying that the slope was unstable. I’ll respect that.

How long is the Plain of Six Glaciers hike?

All told the Plain of Six Glaciers hike along with the Lake Louise Teahouse is 13.8 kilometres return (8.6 miles) with a vertical gain of about 400 m (1,300 feet). It will take you about four hours to do.

You can bring your dog but keep it on a leash. I brought ours but saw only a few others – mainly I think because the locals avoid this trail in the summer. 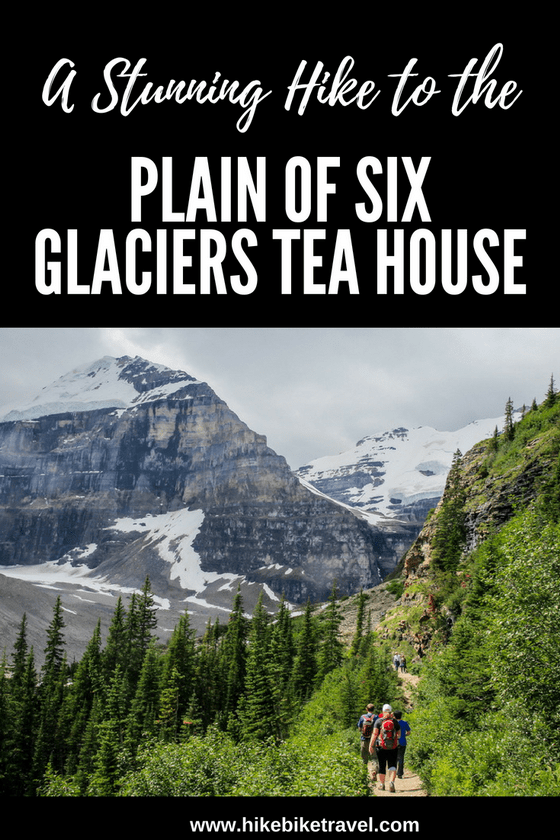