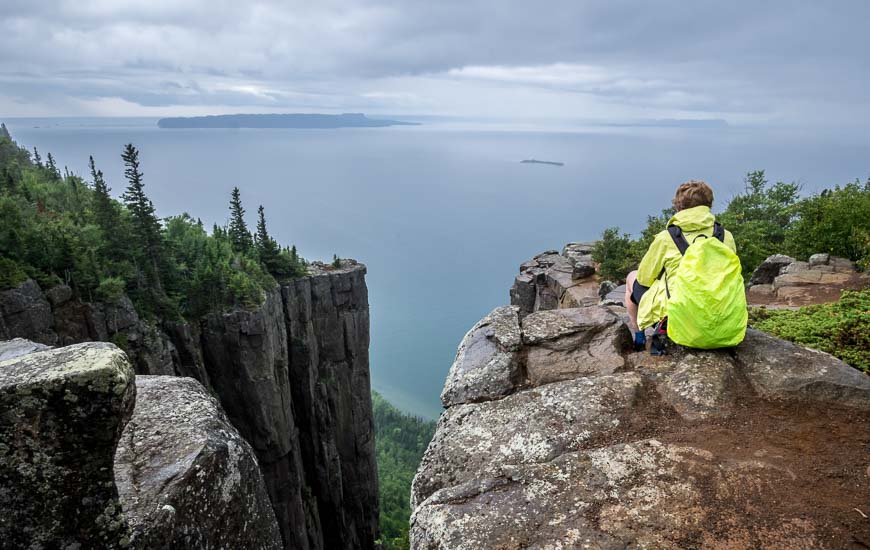 The Top of the Giant hike in Sleeping Giant Provincial Park rewards those who make the 12 km one way trek with outstanding views over Lake Superior. Despite its considerable length, there is only 290 m (961 feet) of elevation gain and the first 8 km of the hike are dead flat so you can cover a lot of ground quickly.

The day we did the Top of the Giant hike did not look promising. It was raining hard when we woke in our tent though it looked even worse over the Giant so I rolled over and went back to sleep until 9 AM.

By then the rain had stopped but by the time we were ready to tackle the hike it was 11 AM. I figured we would be in for an eight hour day, not appreciating at the time that 16 of the 24 km were dead easy.

The hike starts at the Kabeyun South Trailhead along a forested trail off of Highway 587 near the Silver Islet Township. Mileage markers are placed at all important intersections so the trail is a snap to follow.

Our first destination was Tee Harbour, 6.5 km away. We knocked that off in an hour – and that included a stop at a pretty backcountry campsite along the shores of Lake Superior. Since it had only taken an hour to do a quarter of the hike, I knew we could relax and worry less about the time.

Insider Tip: If you have access to a bike, cycle the first eight kilometres and then lock it up at the start of the Talus Lake Trail.

From Tee Harbour it’s pretty hiking for 1.5 km along the Kabeyun Trail to the Talus Lake Trail junction. This is where you leave bikes and start climbing though you’re a mere kilometre away from the Top of the Giant Trail junction.

The climbing is steep in places and the trail narrows and becomes rougher underfoot. When you reach the Top of the Giant you are not at the highest point on the trail. That’s still about 45 minutes away. The name is a bit of a tease.

At times on the last 2 km the trail will test your conditioning program but still it shouldn’t take more than 40 – 60 minutes to reach the high point and along the way there are some pretty spectacular views to keep you motivated.

Go to the very end to get the airy view over the cliff. You’ll be at one of the highest points in Ontario overlooking the largest freshwater lake in the world – by area not volume.

All told we did this hike in six hours round-trip and that included time on the top for lunch and photos and a 15 minute break at Tee Harbour on the return to refresh ourselves in the lake.

Home again was at the campground overlooking Marie Louise Lake in Sleeping Giant Provincial Park. It makes a great base to do this and several other hikes in the park. 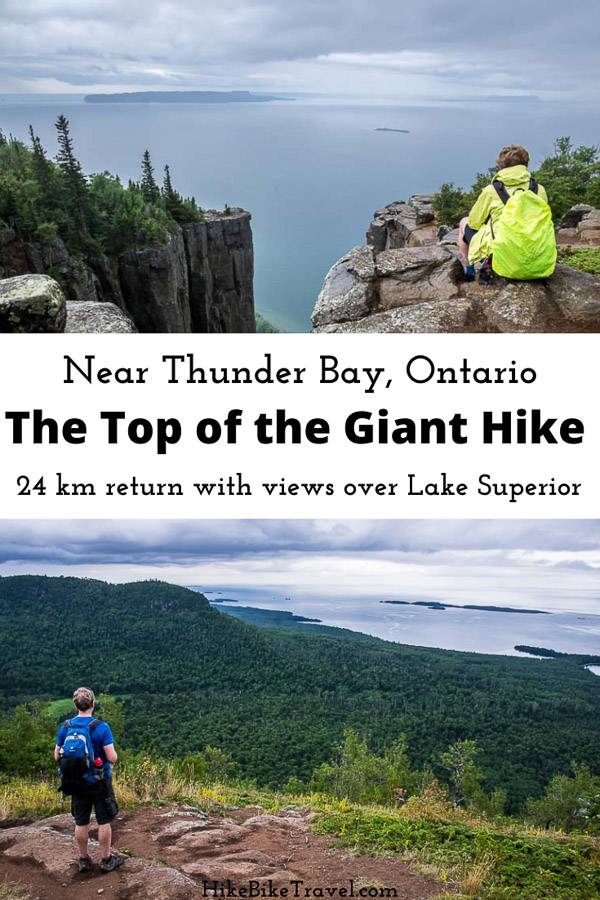 Thank you to Ontario Parks for the great campsite and to Ontario Travel for making this trip possible.