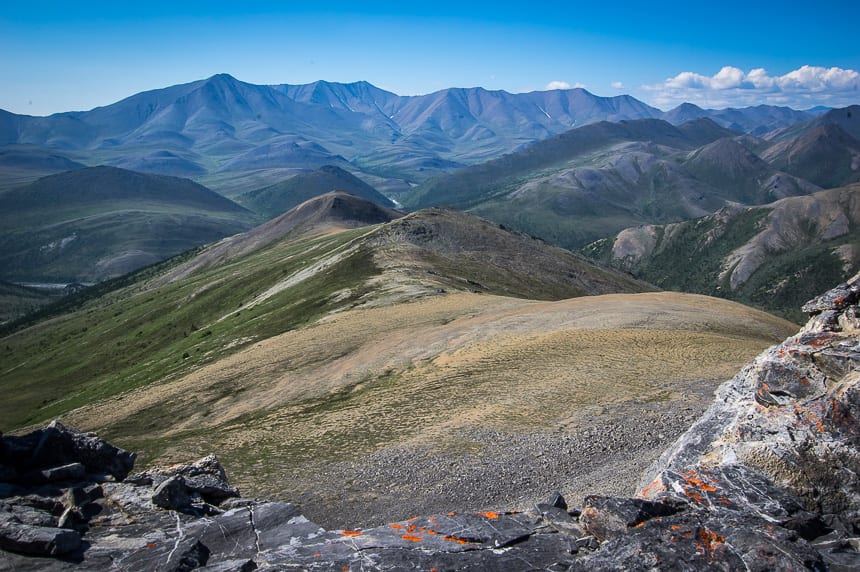 For some of the prettiest, most pristine hiking of your life head to Ivvavik National Park in Canada’s Yukon Territory, home to wild empty spaces and non-glaciated mountains. From the Imniarvik Base Camp there are a huge number of Ivvavik hiking opportunities, all on unmarked trails but with big vistas so it’s easy to find your way.

These are the four fabulous Ivvavik hikes our group did while staying in Ivvavik National Park.

Sheep Slot – one of the easier Ivvavik hikes

Sheep Slot is an easy 3.0 km round-trip hike with less than 20 m of elevation gain. It’s a great warm-up hike that starts at the confluence of Sheep Creek with the beautiful Firth River.

On the way out to Sheep Slot you follow game trails that parallel the river. Geologists will love the synclines and anticlines on display.

Sheep Slot is a fun place to explore with lots of rock hopping and photographic opportunities. We were hoping to catch sight of a group of rafters that were due to come through the day we were there, but unfortunately that never happened.

One of the rapids pictured below is reportedly the toughest to run on the Firth River though you wouldn’t know it from the shore.

On the return to base camp we saw at least a dozen Dall sheep. We were able to get quite close and they didn’t seem the least perturbed by our presence. All told this hike took us a few hours with lots of time for wildlife viewing and photography.

We had done Sheep Slot in the morning with a plan to take the afternoon off and then do a hike to Inspiration Point beginning at 8 PM. High above the Arctic Circle in late June you have continuous daylight so it doesn’t really matter what time you hike.

Starting out from camp, we crossed Sheep River and then made our way, first through bush and then through hillocky ankle turning kind of country to reach a plateau. From there we could see our route up to Inspiration Point.

Along the way we had several magical moments. The first occurred when I was behind Nelson Perry, the Senior Parks Manager. He motioned to me to be quiet and get low. Not 15 feet away from us stood a lone caribou – with its attention focused on the rest of the group coming up the slope. He was a magnificent sight and a recurring one as we saw him again on the way to Wolf Tors.

At another point on the hike, Guy Theriault, the marketing specialist from Parks Canada in Ottawa felt the rush of air from the flap of a giant wing and seconds later saw a golden eagle just clear his head while trying to take out an Arctic ground squirrel.

Then to top it all off we saw a lone grizzly making its way well below our position at Inspiration Point. When it either smelled, heard or caught sight of us it took off – loping across the landscape and out of view within minutes.

We were all pretty pumped and energized from these evening wildlife encounters and so decided to continue to Wolf Tors – another 4.6 kilometres away. It wasn’t hard walking to get to these rocky pinnacles except for a section of hummocky terrain but by the time we got to Wolf Tors it was about 11 PM and I for one was starting to fade. The views though and the lighting made the effort worthwhile.

On the return we stopped to get a photo of our long shadows at midnight – and then pushed on for another 90 minutes to arrive back at base camp at around 1:30 AM. As you can see from the photos there are lots of options for longer hikes on a variety of ridges.

All told it was approximately a 14.8 kilometre return hike.

The hike to Gordon’s Food Cache and beyond

We didn’t move quickly the next morning, sleeping in until about 9 AM. After several cups of coffee and much conversation we decided we’d do the “easy hike” to Gordon’s Food Cache and beyond to a place on the Firth River that offered a rocky beach and fishing opportunities.

There wasn’t much elevation gain as we followed the Firth River from the airport runway (the easy part of the hike) past the remnants of a food cache through thick vegetation with more bugs than we’d seen elsewhere.

Much of the ground underfoot was wet and hummocky. I think we all figured the hike would be a walk in the park and it wasn’t. However, the hike had plenty to offer including an awesome close-up view of a massive golden eagle’s nest.

After a relaxing lunch on the river where a number of the group fished – and came up empty, we saw a large number of sheep playing around on a steep cliff face. From there we made a beeline back to camp and a refreshing dip in the creek. All told we probably hiked all of six kilometres.

Halfway to Heaven – my favourite of the Ivvavik hikes

The 11.4 kilometre round-trip Halfway to Heaven hike is exceptional. Over about three hours as you make your way to Dragon’s Tor (the turn around point) you gain 594 metres, most of it right out of camp when you are freshest.

It’s a day for enjoying big mountain vistas, looking for wildlife and counting your blessings for being in such a magnificent place.

This is the last hike we did in the park and my favourite though Wolf Tors was a close second. For most of the hike we had lots of wind so up until the final approach to camp we had NO biting insects. None. In the Arctic. In fact on this trip I never pulled out my bug shirt and only used bug spray on the Gordon’s Food Cache hike.

When we flew into Ivvavik National Park we met a group who had done two back to back stays in the park – exploring on their own. They were ecstatic about the hiking. That’s the beauty of this place. You can do self-guided hikes if that’s what you like but there is the option for the full catered, guide experience. To see when trips are being offered in 2022 click here.

A huge thank you to Parks Canada and Travel Yukon for inviting me on this trip of a lifetime. 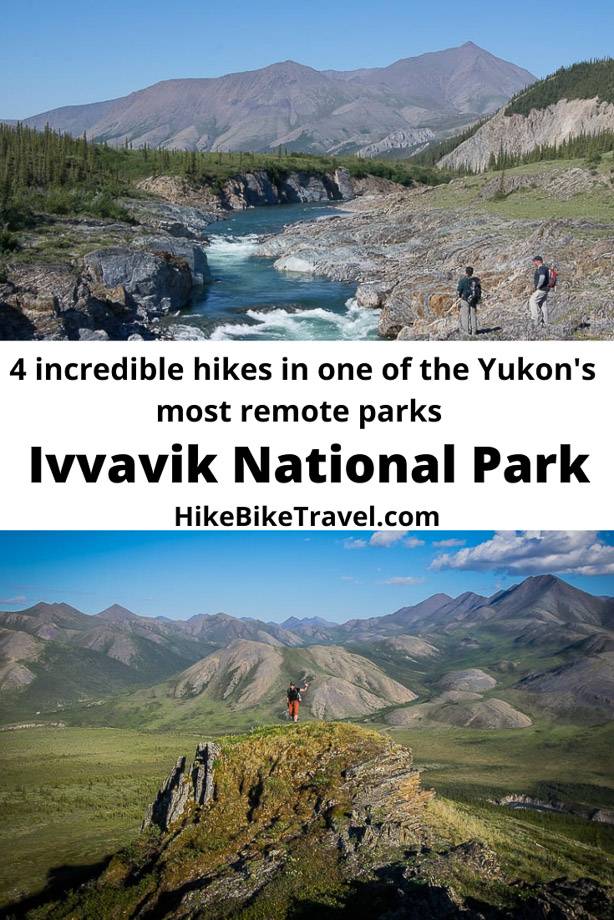