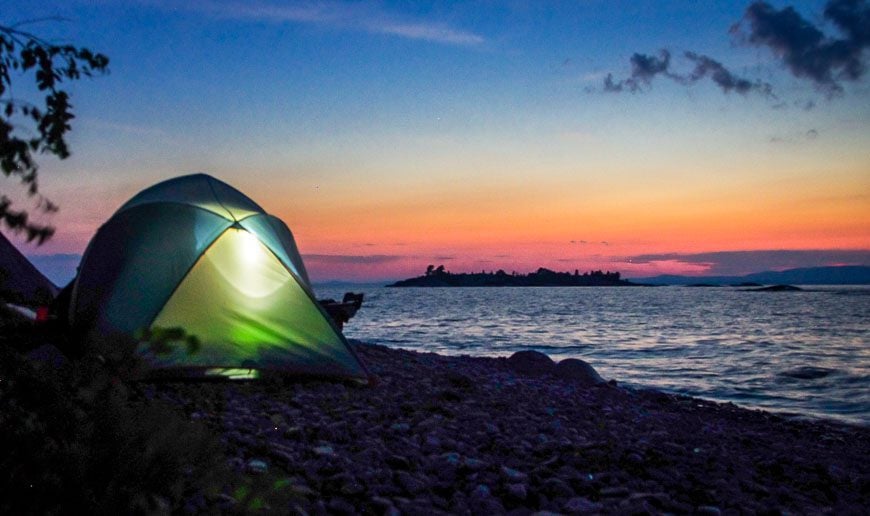 When the lights go down

If you’re looking for an outstanding kayaking and camping trip that delivers where it counts  – unparalleled beauty, rocky pink granite islands and gorgeous campsites on islands you get all to yourself, then you should think about a kayaking (or canoeing) trip to the Georgian Bay – in particular, the area around Killarney Provincial Park.

The camping on Georgian Bay is truly spectacular – think the Group of Seven painters kind of scenery. You just might have to duke it out with fellow campers on a Saturday night for a prime spot.

This post includes some affiliate links. If you make a purchase via one of these links, I may receive a small commission at no extra cost to you. Thank you.

A few years ago I’d spent some time kayaking around Franklin Island in the Georgian Bay, further to the south so I had some idea of what to expect. But I thought this area bordering Killarney Provincial Park was even more beautiful, probably because it was less built up and there were so many islands to explore.

Stock up and rent what you need from Killarney Outfitters

John and I met two of our very good friends – Jo & Ted at Killarney Outfitters within the Killarney Provincial Park boundaries. You can buy any last minute supplies you need for a trip here – and if you haven’t bought a map yet it’s a good place to get one.

It’s also where you pick up your paddles, tow ropes and PFD’s if you’ve arranged for a canoe or kayak rental.

It’s about an eight minute drive to the Chikanishing River launch site from Killarney Outfitters. But before you go there, especially if it’s a multi-day trip you’re planning, buy a parking pass at the George Lake office in Killarney Provincial Park for $12.25 per day. The other option is to buy day passes at the launch site but that is slightly more expensive.

Our original plan was a five day circumnavigation of Philip Edward Island, starting and ending at the Chikanishing River launch site. But Jo and Ted had to change plans and could only go out for two nights instead of four. As a result we decided we’d make the trip into a relaxing one – exploring islands and stopping wherever we thought it looked good.

The Fox Island chain in Georgian Bay has incredible campsites

The Fox Island chain, roughly 11 km from the launch site, was our goal on the first night. We totally lucked out with weather and winds and in a few short hours we were there – looking for campsites.

As it was a Saturday and peak season, most were already taken. Eventually we found a cobble beach campsite on Centre Fox Island overlooking Sly Fox Island – that looked close to ideal.

There was enough room on the narrow beach to pitch two tents. And the island was a great one for exploring. It was a steep climb off the beach, but the reward was expansive views of the nearby islands and beautiful rock to explore and photograph.

We elected to spend two nights on the island – partially because we didn’t want to look for another site and its location was perfect for exploring nearby islands.

After a leisurely morning we headed for Solomons Island and the warren of little islands around it. Several hours were spent just poking in and out of small inlets where we did see one bald eagle and a great blue heron.

After a lunch stop with a swim it was time to head back but by then the wind had whipped up – as it tends to do on the Georgian Bay – so the return was a much harder paddle – though good fun in the waves.

To people who want to be camping on the Georgian Bay – note that we found several gorgeous campsites that weren’t marked on any official maps so don’t give up hope if it’s busy. Instead paddle some of the quieter waters until you find something. Most people – ourselves included – seem to opt for the campsites with the grand views.

Back at our campsite, we lounged some more, swam again, read and cooked dinner. And as the sun was setting we climbed to the top of the island for the view you see pictured below.

On the third day we packed up camp and headed pack in the direction of Chikanishing River. Jo and Ted left John and me on Crab Island where we whiled away another day reading and swimming.

It was a busier area because of its location so it was fun to watch various groups paddle by – many in loaded canoes that didn’t look very seaworthy should a storm arise.

By the fourth day I was getting itchy and starting to regret our decision not to circumnavigate Philip Edward Island. I figured John and I could have done it if we’d left right from the Fox Islands. But we didn’t have any weather allowance built into the trip so we’d decided we’d have to save it for another time.

We opted to head for Pinch Island – near the Flat Rock beacon. This turned out to be a great decision as the island does not feel heavily used. It’s big so there is lots to explore and there are loads of camping options.

After landing and choosing a site we once again spent the rest of the day reading, swimming and exploring.

From here it’s an easy paddle even with the wind blowing hard (which it was) to return to Chikanishing River. We did it in just over an hour.

The kayaking among the 10,000 islands in the Georgian Bay is first rate. It’s certainly some of the prettiest kayaking I’ve ever done with the only downside being the sheer number of people vying for campsites at the height of the summer. It’s a real treat when you score an island and you have it to yourself! The camping on Georgian Bay is some of the best you’ll find anywhere in Ontario.

Some useful information for kayaking and camping on the Georgian Bay

Cellphones worked wherever we paddled.

On weekends try and get an early start to beat the rush – especially if you don’t plan to paddle far. Our campsite on the third night out on Pinch Island is a great choice. It’s not on the main Philip Edward Island loop but it’s still within about an hour of the launch site.

Wind and fog are the hazards on this trip. Carry a marine radio for updates if you’re planning a longer trip.

Please campers – pack out your garbage. You can dump it in a proper garbage at the launch site. And burn your toilet paper. We saw way too much of that in heavily used areas.

For more ideas on hikes and portage free paddling trips check out Paddling and Hiking the Georgian bay Coast.

Ne sure to take a stove for cooking. This super light Jetboil stove also works well as a backpacking stove and packs up into nothing.

And I can tell you having a chair that sits off the ground is a treat when you’re camping. There are many new ones out on the market including this one that packs down well.

Further reading on things to do in Ontario in summer 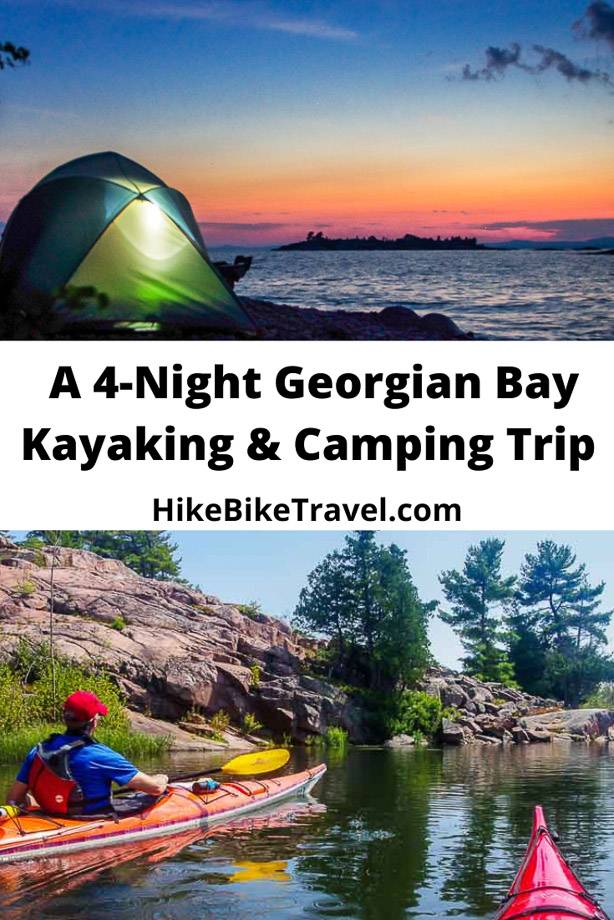