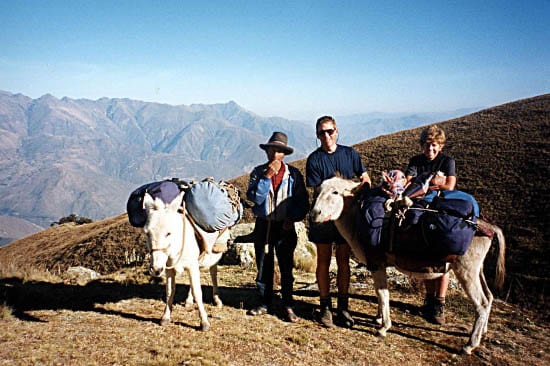 Prior to our arrival in Peru we had done some research with the help of the South America Explorers Club. They provided route info and maps.

A stove that could take any type of fuel

A first aid kit with assorted drugs for altitude, infections…

Stock up in the city of Huaraz

Trekkers and hikers make their way to Huaraz, a city about a four hour drive north of Lima, to coordinate the next leg of the trip.

Huaraz is a medium sized city with banks, markets and little hole in the wall stores that sell everything else you could need. It’s also the staging area for nearby hikes and climbs so shuttles are easily organized. There are plenty of trekking companies operating here and it isn’t hard to organize a trip.

We left Huaraz with the promise that guides would miraculously appear at the trailhead. And they did – within seconds of being dumped in what is just a dot on a map in the middle of nowhere. It felt like a miracle to us. 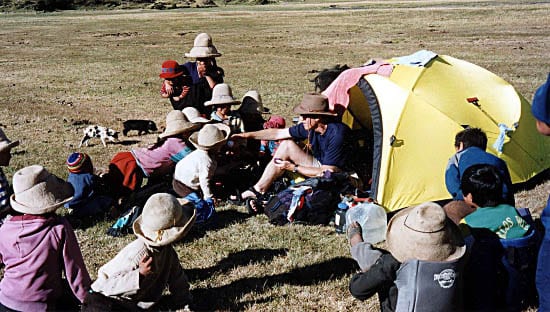 The Cordillera Blanca in Peru

The Cordillera Blanca is a range of memorable mountains. The area is pristine (or at least it was), very lightly traveled, remote feeling and utterly gorgeous. Picture deep indigo-blue lakes, turquoise lakes, tall grasses and rugged snow covered peaks.

In total we climbed up and down seven mountain passes and for days on end we were well above 12,000 feet. Our highest point reached was 15,200 feet.  There were many nights when we’d all wake up with racing heartbeats and shortness of breath.

It is bloody cold it July

It’s usually the hardship and disasters one remembers on a trip. We had neither but nights were often in the 10°F ( bloody cold) range so there wasn’t a lot of sitting around after dinner.

Perferio, our guide had just brought donkey blankets for sleeping which didn’t seem like much under the circumstances. The first night was the coldest so we handed him a pair of North Face fleece pants, showed him how to set up a tent, fed him something quite out of his normal range of diet and gave him Advil that he ended up hoarding for his wife.

We ended up with one very agreeable and happy guide.

In the last few days we ran into westerners and we all felt like our space had been invaded.  Although the last days of hiking were pleasant, they in no way compared to the great adventure we’d had up until then.

There are lots of tour companies that will take you into the Cordillera Blanca but this adventure was a standout, particularly because we had organized and executed it ourselves.

If you go put considerable effort into your preparations – especially since there is no quick and easy way out of the area if there’s a mishap. In fact I had taken an in-depth wilderness first aid course which would have helped the other two….