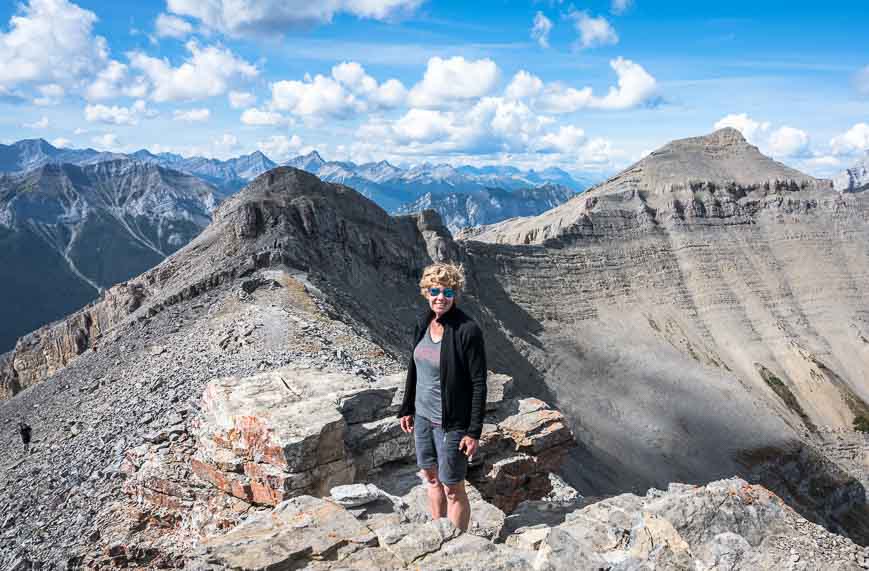 Enjoying spectacular views from the summit

The EEOR Hike Near Canmore

The EEOR hike (short for east end of Rundle) near Canmore is an out and back scramble that will test your mettle. It’s steep from the get-go with an elevation gain of 875 m over just 2.9 km.

For many people the EEOR hike will be a challenge. It’s got lots of loose rock which is unsettling for some – and a cliff band with rock ledges along with some exposure near the top to negotiate. The good news is that there are occasional breaks in the steepness of the hike. And superb views for most of its length.

Trail update: Always check the Alberta Parks report. In fact, as of April 1, 2022 EEOR will be closed until the end of the year for construction upgrades at Grassi Lakes and the Goat Creek Trailhead.

EEOR hike and why you should do it

The east end of Rundle hike – while tough rewards with superb views of Ha Ling Peak, the Spray Valley and Canmore. You top out at an elevation of 2545 m (8,350 feet) and will actually be looking down to Ha Ling.

The hike is also part of the Triple Crown of Canmore hikes which in theory are to be completed in a day. Lots of people though, are happy to knock the three hikes off over the course of a summer. The other two hikes are Ha Ling Peak and Mount Lady MacDonald. Do them all in a day and you will ascend and descend 2400 m!

If you do the hikes and post summit pictures of each peak on the Georgetown Inn’s Facebook page then you can claim your prize – a beer mug and discounts on refills. All details are on the Inn’s website.

There are loads of unmarked trails winding through both the woods and the scree to the rock ledges at the base of the cliff face on the east end of Rundle. There is generally no right or wrong way – but there is easier and less steep as I found out on the descent. Many of the trails are climber’s trails so if something doesn’t feel right, retrace your steps.

The hike starts by the Smith-Dorrien Road (described at the bottom of the post) and climbs steeply on a trail along the southeast ridge of Mount Rundle. Note that there is one very short section of ledges early on in the hike. Always be sure to keep left of the exposed cliff edge.

Once you’re above the first scree section you can see the trail as it winds up through even more scree towards the rock bands.

Because it’s a popular trail you’ll probably see lots of hikers unless it’s very early or late in the day.

We did see one blue marking painted on a rock near the end of the tree section and a “No Rock Throwing Sign.” That was it for signage. Be extremely careful with your foot placement. You absolutely do not want to send a boulder flying down the mountain. If you ever do, scream ROCK.

Once you’re through the trees there’s a long scree section with multiple trails running through it. Find a trail that works for you. Emerge at a lovely large meadow where the grade moderates for a very short while. Reportedly you may see mountain goats around here. Head for the next scree slope which ends at the rock ledges at the bottom of the summit’s cliff face.

The crux of the EEOR hike

Not everyone who starts out to hike to the top of the east end of Rundle makes its. Many turn back in the steep scree or before the rock ledges. Do what feels right for you.

When you reach the rock ledges turn RIGHT and follow them for approximately 50 m to a trail that leads to the summit. Some of the rock ledges are narrow, which can be unnerving. Take your time and don’t be rushed. Go through them at a pace that is comfortable for you. There are lots of good handholds on the way up. The final trail to the top after the ledges is a piece of cake.

What a treat to be on the summit. The views are sublime in all directions. If it’s a clear day, you may even be able to see Mt. Assiniboine to the southwest. Join the throngs on the top, carve out some space, as it can get crowded and enjoy a well-earned lunch. But keep an eye on the weather. This is no place to get caught in a storm.

I found the descent to be tricky in several places – partially because I was so focused on my feet I didn’t pay enough attention to the trail. You should descend exactly the same way you came up.

I found descending the rock bands easier than the ascent. Be careful with your foot placement so you don’t dislodge any rocks from here. You’ll be through it in five minutes.

Be sure to look up occasionally to get your bearings so you don’t head too far west (right as you’re looking down). We ended up following a couple of ladies into a deep gully and had to carefully work our way east, sometimes sliding on our butts, to get back to the main trail.

The trailhead is easy to find once you know what you’re looking for. From the turnoff to the Canmore Nordic Centre drive south on dusty Highway 742 (also called the Smith Dorrien – Spray Lakes Road) for approximately 4.8 kilometres. Look for vehicles pulled off on your left by Whitemans Pond BEFORE you reach Goat Creek Trailhead. Park here if there’s room.

Otherwise continue down to the Goat Creek Parking Lot – or on the road if it’s a busy weekend. For the trailhead itself, look for a piece of pink flagging tape on the west side of the highway across from Whitemans Pond near two large hydro poles. That’s your starting point.

The best time to hike EEOR

Plan to do this hike after the snow has left, usually by early May. The hike should be doable into early October. Once the snow starts to fly give it a pass unless you’ve got experience on snow and ice. Then you’d need to go prepared with crampons and an ice axe.

How long does it take to hike EEOR?

Allow anywhere from three to six hours depending on your speed. We did it in four hours return.

More reading on hikes near Canmore 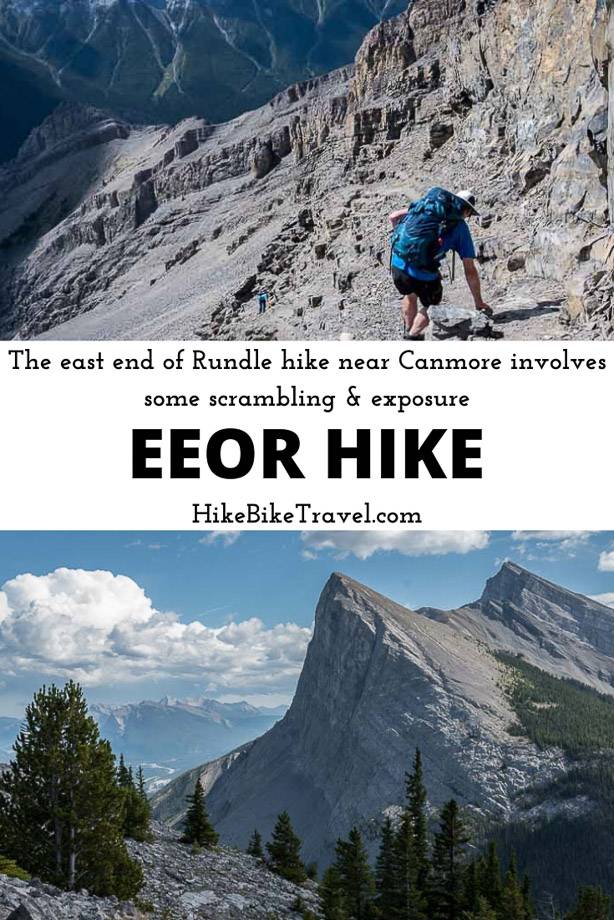