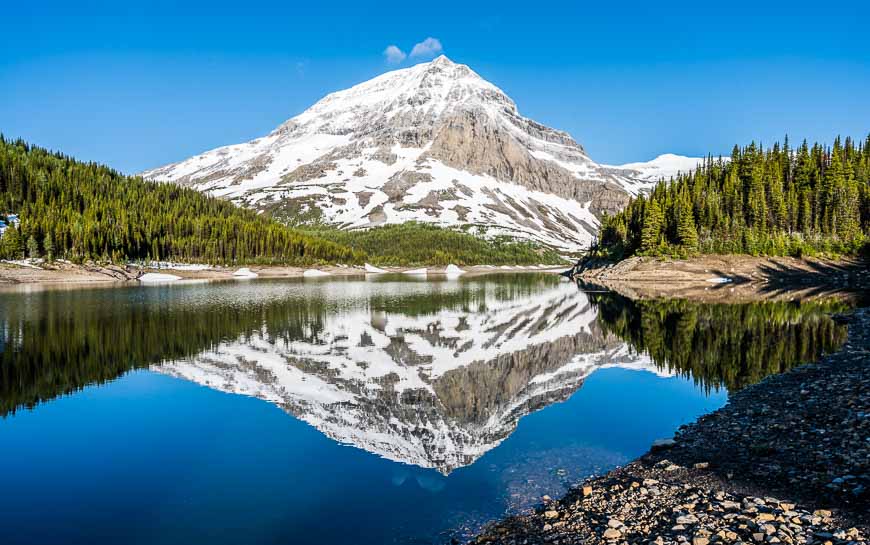 Three Isle Lake at 7 AM

Three Isle Lake in Kananaskis Country. It’s a great choice as it also offers several options to continue beyond the lake – including the difficult but reportedly fabulous Northover Traverse along with the easy hike to South Kananaskis Pass and Beatty Lake. Fortunately the hike up to the lake is worthwhile in itself. And Three Isle Lake is also a pretty destination in its own right, at least when the water levels are high. What little mountain scenery I’ve seen at South Kananaskis Pass looks fabulous.

The 10.3 km one way hike to Three Isle Lake starts by Upper Kananaskis Lake. It takes you first to the Forks Campground – a great destination for families and those wanting to do day hikes from the campground. Then a few easy kilometres later, you head up a steep headwall that will likely have you breathing hard, especially if you’re carrying a backpack. At least the views are marvelous. In total you climb 500 m (1,640 feet) to reach the lake, with most of the gain after the Forks Campground.

Finding the trailhead for the Three Isle Lake hike

Continue on the paved Kananaskis Lakes Trail (the Smith Dorrien Trail is not) past the turnoff to the Canyon Creek Campground, William Watson Lodge and Boulton Creek. (But go here after your hike if you want cold drinks and ice cream!) Do not take a left towards the Upper Kananaskis Day Use Area. Instead continue past the turnoff to the Interlakes Campground to reach the North Interlakes Day Use Area, basically at the end of the road. From the turnoff at Highway 40, it’s approximately 15 km to the parking lot.

From the parking lot cross the footbridge over the spillway and turn left onto an old road. Pass a turnoff to Mt Indefatigable – a trail decommissioned to protect grizzly habitat.

At 0.8 km stay right on the upper trail. The lower trail is best used if you’re planning to hike the Upper Kananaskis Lakes Circuit – a very worthwhile day trip.

At the next intersection, 2.2 km into the hike, keep right and follow the rocky road beneath the steep slopes shown in the photo below. Continue hiking along the road, passing the Palliser rockslide. Reach a bridge over Invincible Creek, 1.6 km past the last intersection. You have now hiked 3.8 km. Mountain bikers must stop at this point.

Continue on a dirt trail through old forest to reach a bridge over the Kananaskis River at the 5.8 km mark. Skirt another rockslide at the base of Mount Lyautey. If you look up from that rockslide, you can just barely make out the headwall you’ll be climbing in short order.

The rest of the hike to the Forks Campground at 7.2 km is flat and easy. We saw a lot of moose poop, especially when leaving the campground but no sign of the animal.

The Forks Campground sits at the confluence of the Upper Kananaskis River and Three Isle Creek. It’s one of the nicer backcountry campgrounds I’ve seen and the perfect place for lunch. There are lots of picnic tables and even a fire pit with benches all around it. (Firewood was provided, at least in early July 2020, even though the park website said otherwise.)

At the campground you’ll find 15 campsites along with bear lockers and a pit toilet. It was very popular with families when we passed through it, probably because it’s an easy destination to reach. It’s also a good spot to do day trips from – like the up and back hike to Three Isle Lake, without the weight of a backpack.

To Three Isle Lake from the Forks Campground

The real work starts after the Forks Campground. The trail starts climbing about 10 minutes after leaving the campground. It’s gentle at first but it gets steeper, especially once you get onto the avalanche slope.

When we hiked it in early July, it didn’t take long to figure out we were following a bear. In fact I un-holstered my bear spray… just in case. Signs of a bear were everywhere once we crossed the stream pictured three photos below. There was plenty of fresh digging along with flowers strewn helter-skelter along the trail. They hadn’t even had time to wilt. About 15 minutes up from the stream crossing, a couple in front of us by just a minute, yelled down that they’d just seen the bear head into the forest.

The following day we also spoke to a man who had been bluff-charged by a grizzly near the Forks Campground a few years back. He didn’t carry bear spray then but quickly became a convert. (I would also recommend a bear spray holster so you can get to the bear spray FAST.)

Back to what’s ahead of you.

Be mentally prepared for a stiff, hard climb up the headwall. There are some stairs in place to help. Don’t forget to look up periodically as this is a really glorious mountain landscape. When you get to the top of the headwall, you’re 10 kilometres into the hike – and have only 0.4 km to go.

Descend 30 m (we were mostly on snow in early July) to reach a signed junction. Day hikers will want to go left to reach the lake. Campers head right to find one of the 16 campsites.

The campsite at Three Isle Lake

There are actually two camping areas at Three Isle Lake as we discovered when we hiked to South Kananaskis Pass. They are about half a kilometre apart. They both have sets of bear boxes (way easier than hanging your food), picnic tables, earthen tent pads and an outhouse.

I found the campsites to be nicely spread out and quite private, though I only found one with a view of the lake.

The hike to South Kananaskis Pass

We did the 2.1 km one way hike up to South Kananaskis Pass after breakfast. The climb was an easy 145 m (475 feet) though much of it was on a very snowy trail.

To find the trail follow the lakeshore northwest from the first campground to the second campground. From the western most campground it’s easy to pick up the trail. Head up through sub-alpine forest, descend briefly to the lake again and then continue northwest on a gentle grade to reach the pass.

Retrace your steps. We were back at the lake in about 30 minutes, even with the snow.

A few things worth taking with you

Even if you’re a fan of a GPS, I highly recommend taking a paper map – for trip planning purposes and especially if you’re considering the hike between Three Isle Lake and Turbine Canyon campgrounds over North and South Kananaskis Passes. The Gem Trek Kananaskis Lakes Map is the one to get.

For the nature lover who wants to learn the names of wildflowers, the compact Central Rockies Wildflower guide is a great choice.

For those unexpected gear fails on a trip, Gear Aid Tenacious Tape Repair is the way to go. It will fix sleeping pads, rain pants, down jackets, tent flies, tarps and more.

And if you’re not a big fan of backpacking because of uncomfortable nights in a tent, consider investing in a deluxe pillow that weighs next to nothing. 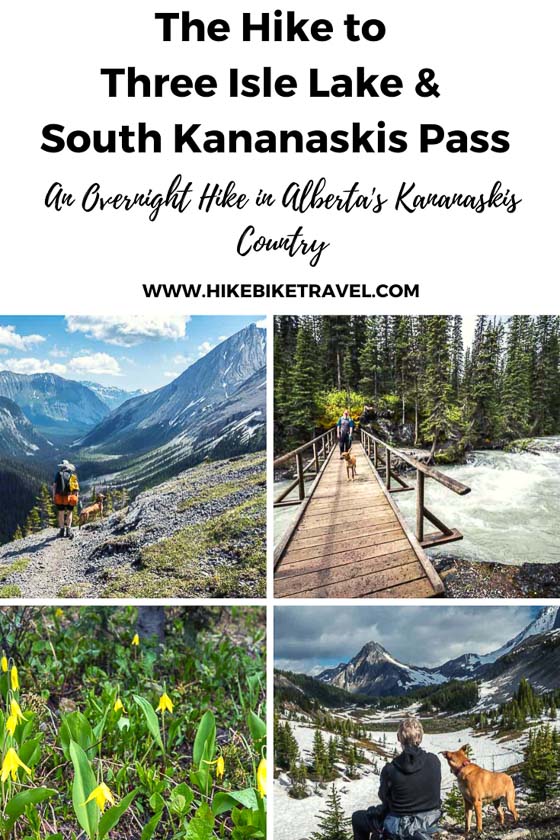