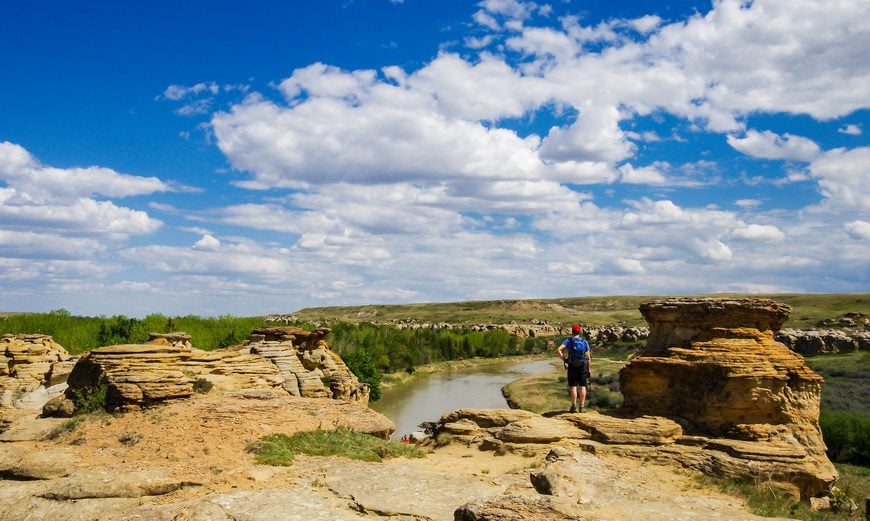 Views from the Hoodoo Trail

A Visit to Writing-on-Stone Provincial Park

If you want a history lesson that beats anything you’ve ever had in school, visit Writing on Stone Provincial Park in the southeast corner of Alberta (it’s called Áísínai’pi by the Blackfoot, meaning where the writings are). But before you go, sign up online for a two hour rock art tour so you can see a large number of rock art paintings, most of which are 500 to 1000 years old.In fact, the park boasts the largest concentration of rock art on the Great Plains of North America.

Writing-on-Stone Provincial Park is also home to fantastic desert scenery with loads of sandstone hoodoos just begging to be photographed. Hiking, canoeing, camping, and birding all take place in the park as well.

Writing-on-Stone became a park in 1957. Then in 1977 access to some of the park was restricted, largely because of all the graffiti happening. It became a UNESCO World Heritage Site in the spring of 2019!

John and I did the rock art tour with Deserae Yellowhorn as our guide. We were joined by about a dozen young teenagers and four other adults. The tour started with a short drive into an otherwise off-limit section of the park. From there we hiked a short distance down the Milk River Valley, stopping to discuss the rock art panels along the way.

Though simplistic, the pictographs (paintings using ochre which was likely sourced via trade) and petroglyphs (rock art formed by carving into the stone) tell a story. And with a guide along to explain the meaning of the symbols, the rock art comes alive. Part of the way they date the art is by what is or isn’t in the scene. For example horses didn’t show up in the area until the early 1700’s.

Deserae was masterful at bringing the Blackfoot history alive. We learned that the area from the park through to the Sweet Grass Hills in Montana is a very sacred area for the Blackfoot people. As such no wars ever took place here, despite the fact that as Deserae pointed out, the Blackfoot people were intimidating and very war-like. Interestingly, the typical male was 7 feet tall and females on average were 6.5  feet tall.

Not all the rock art in the park has been created by the Blackfoot people. The Shoshone, Cree and others contributed as they were passing through. On the other side of the river – which is off limits to the general public, we are told there is even more rock art to see.

Right now there is discussion concerning what is graffiti and what is not. It has been decided that everything pre-1957 is historical. “Recent” carvings include the names of some of the earliest settlers as well as the Model T Ford.

The Blackfoot people have a very strong oral culture. Storytelling season is in winter when the days are short and the nights are long. Many stories have a moral theme – geared to teaching children a lesson. It was a real treat to hear so many of them via Deserae.

The buildings in the photo below are reconstructions of the ones the Northwest Mounted Police lived in – while trying to disrupt the flow of whiskey from the States to Canada. We heard that they got so bored patrolling out in the middle of nowhere that they eventually helped make the whiskey trade happen.

If you have time, I highly recommend the easy 3.5 km return hike to the Battle Scene petroglyph through the beautiful hoodoo country. It’s an interpretive trail following the Milk River with a dozen stops along the way described.

If you visit Writing-on-Stone Provincial Park

Getting to the park from Milk River, Alberta

From Lethbridge take Highway 4 southwest to the small community of Milk River. This is the starting point of the fabulous three day canoe trip on the Milk River that takes you right into the park. Head east on Highway 501 and then south on 500 to reach the park. Allow 30 minutes to drive the 41 km from Milk River.

Note: There is a small grocery store in Milk River where you can pick up any last minute supplies. Be sure to take lots of cold drinks especially if you plan on camping. 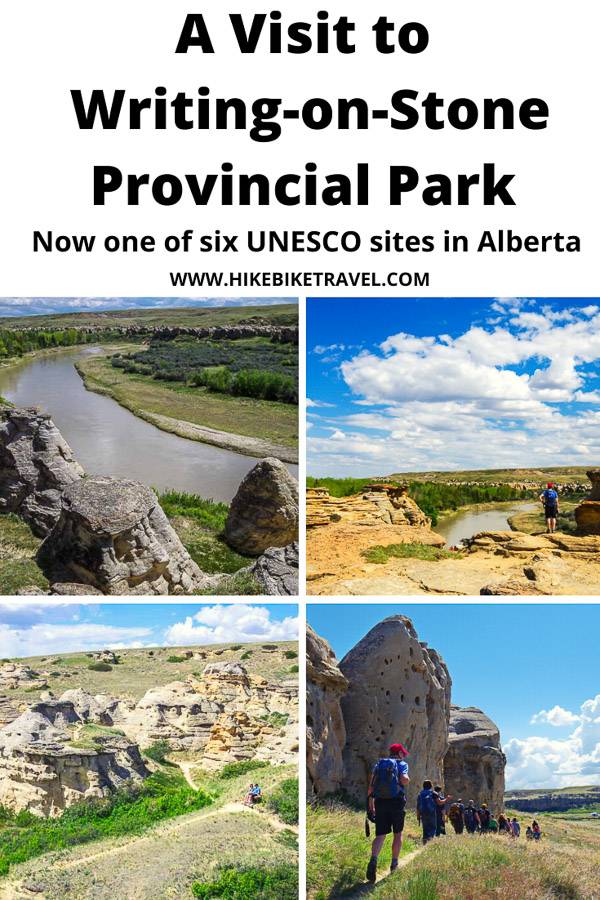 Thank you to Travel Alberta for making this trip possible. All opinions are my own as usual.