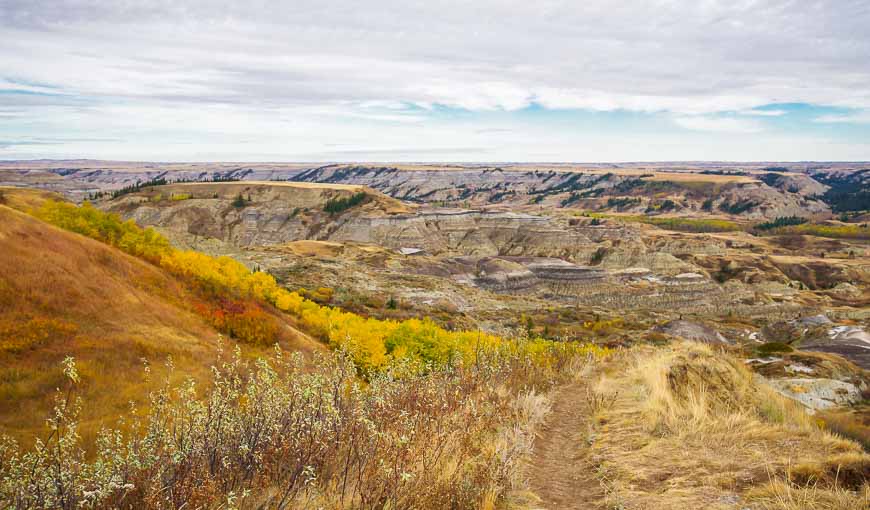 For an Alberta road trip that doesn’t involve mountains, head east to Dry Island Buffalo Jump Provincial Park where you can find birds, stunning badlands scenery and a buffalo jump used over the past 3,000 years by the Plains Cree.

Getting to Dry Island Buffalo Jump

The backroads are quite pretty on the way to the park, especially when you descend or ascend from the Red Deer River. The roads we took were through places I’d never heard of before – Rumsey, Trochu and Huxley. All offered scenes of big skies, and in some sections the road ran beside ponds filled with birds.

From Calgary it’s a 1.75 hour, 180 km drive via Highway 2, 27 and 21 to Trochu and Huxley. The final approach to Dry Island Buffalo Jump is via 17 km of good gravel road off of Highway 21, just south of Elnora, another hamlet whose name was new to me.

The most northern buffalo jump

Visit the park with a picnic basket in hand and a plan to enjoy the scenery, especially in the fall when the park is awash in yellow, orange and even red.

From the overlook the scene below unfolds offering big drama. This buffalo jump is the most northern of the ones around – chiefly because if you go further north, local geography favoured other methods for hunting buffalo.

The most famous buffalo jump – Head Smashed in Buffalo Jump – a UNESCO site several hours south of Calgary – isn’t nearly as high. Most jumps are in the range of 8-15 m. This one is huge in comparison at 45 m.

Dry Island Buffalo Jump was used at least four times between 700 and 2,800 years ago. Remnants of tools, fire pits and pottery have been found at the site.

Hiking trails in the park

There are no formal hiking trails in the park but you can wander off-trail, basically walking where the wind and the mood blows you. It’s not always easy walking but it is pretty. Mostly you’ll be hiking through coulees and native grasslands. Avoid the rugged badlands (they get slick when wet) and be wary of the sheer cliffs!

Keep your eyes peeled for the 150 species of birds that have been identified in the park. In particular the badlands provide habitat for birds of prey like the prairie falcon, golden eagle and ferruginous hawk.

The Red Deer River runs through the park

You can drive down to the Red Deer River from the overlook on a very steep gravel road. It’s not recommended in wet weather and trailers are forbidden.

The river is a great spot to launch a canoe and one of the most common put-ins for the two day paddle down the Red Deer River to Drumheller. We did the easy paddle one summer and I can assure you it’s perfect for novice canoeists and families.

We met two women who had paddled all day – actually paddled and walked their canoe since water levels were low in the fall – and were spending the night in the park as it is possible to camp by the river. This would be one of the better campsites along the Red Deer River!