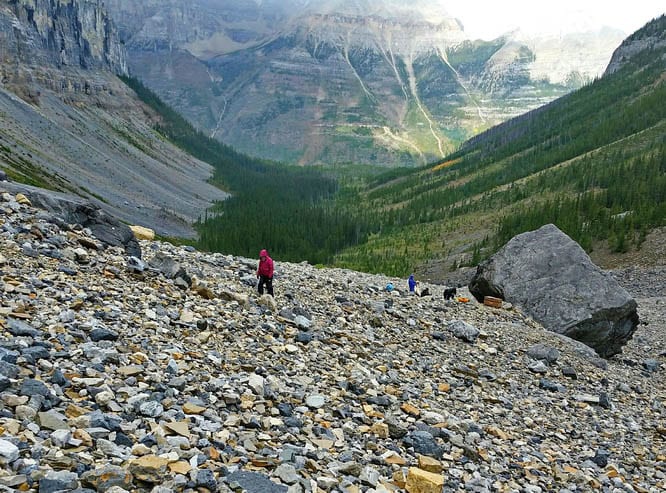 “You could get lucky finding something new” exclaims Claudia Herding our Burgess Shale guide who is leading us on the Stanley Glacier hike in Kootenay National Park. We are a group of seven people: Claudia our guide, two women from the Red Deer hiking club including 75 year old Bertha; Alan, an English fellow living in Detroit; his 79 year old father from England, myself and a woman who has come along as a sweep.

At 6°C I wasn’t sure if we’d be snowed or rained upon but no matter what we were all keen on the Stanley Glacier hike in search of fossils.

The route up to the Stanley Glacier

The total hike to the fossil beds near Stanley Glacier is approximately 10 km return with around 450 m of elevation gain.

It starts with a couple of kilometres of easy switch-backing through an area that was burned in 2003. There’s lots of new growth – primarily lodgepole pine – which needs fire to release their seeds and lots of fireweed that’s looks pretty dressed in its fall colours.

Our goal was a large rock, possibly an erratic – accessed via a 200 m section of rocky trail. In the vicinity of this rock are loads of tiny fossils that make up the Burgess Shale. The guided tours to this area started just last year as fossils were discovered as recently as 2008.

After crossing Stanley Creek the trail is gentler until it reach the talus slopes. Views open up and you can see the tongue of the Stanley Glacier in the distance.

The Burgess Shale Discovery in 1909

Charles Walcott, a paleontologist made the original Burgess Shale discovery in 1909 on a mountain ridge in Yoho National Park. In the shale soft-bodied fossils that lived in a tropical environment during the Cambrian era over 500 million years ago can be found.

Other Burgess Shale sites have been located around the world including in Greenland, the Atlas Mountains of Morocco, Emu Bay in south Australia and Chengjing, China. In 1981 UNESCO recognized the global importance of the Burgess Shale site.

Claudia showed us some of the fossils we might find along with photos of what they probably looked like. Then we were sent off to see what we could find.

For the first half hour I found nothing but pretty rocks. But once I understood the scale of what I was looking for I found loads of tiny fossils. It ended up being far more fun once I knew exactly what I was doing.

All told between hiking and fossil hunting we were out for about seven hours. Although you could in theory do this hike on your own (whereas you can’t do the hikes on your own in Yoho National Park), you learn so much more with a knowledgeable guide like Claudia.

This hike costs $55 plus $13.50 for a non-refundable reservation fee. Go prepared no matter what hike you do – as they run rain or shine. On the website there is a list of suggested items to bring – and in late August I was very happy to have a hat and mittens. Be sure to make reservations online early.

There are two other guided Burgess Shale hikes you can sign up to do in Yoho National Park – though they are longer and more strenuous.

Further reading on hiking in Banff and Kootenay National Parks 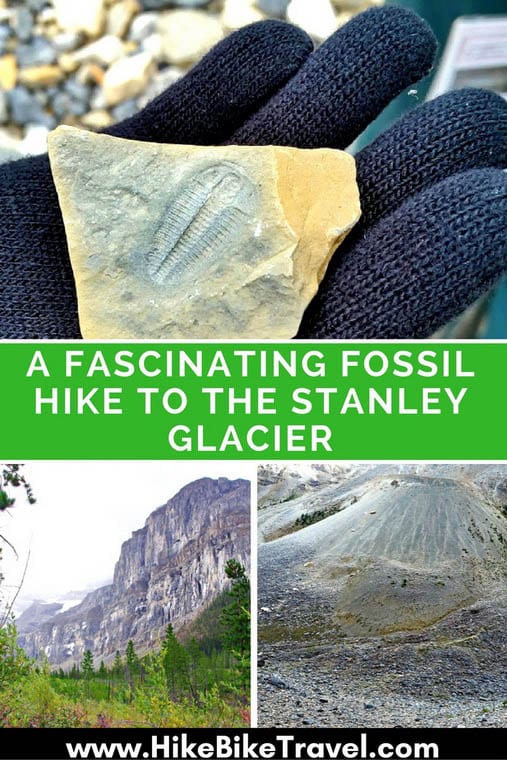 A big thank you do Parks Canada for inviting me on this hike.