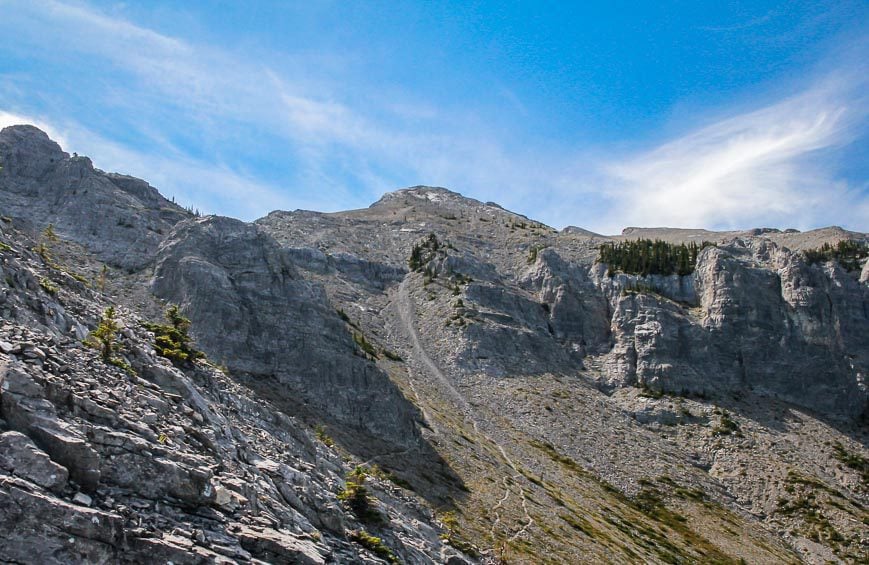 The view on the other side of the chimney

The Demanding Yamnuska Hike is Full of Surprises

Upgrades are completed & the trail reopened in 2022

Mount Yamnuska stared me in the face for long enough. I decided that it was time to stand on its airy summit. But little did I know what I was in for. The demanding Yamnuska hike is full of surprises.

The Yamnuska hike is not one for novices, young families or people who are completely risk adverse to any exposure. You can do the hike to the chimney without any fear of exposure – but even that is a stiff climb. Still it offers some great views.

In spring when I did it, the weather can change in an instant. Check the forecast before heading out. As a precautionary measure take icers and an ice axe, if you know how to use it. There’s no harm in turning back if its not a comfortable experience. The mountain isn’t going anywhere.

Note: The trail reopened in 2022. Although I haven’t done it since it reopened, I understand the following upgrades were made.

You can see Yamnuska from the Trans-Canada Highway

You can’t miss Yamnuska’s impressive rock face on a drive from Calgary west towards Banff National Park, especially when it’s bathed in the light from the golden hour. It’s the first major mass of rock you see. And it is just 45 minutes from the western outskirts of Calgary.

The mountain is famous in climbing circles for its multitude of routes including Blue Jeans Direct – the hardest climbing route on the wall with an impressive 5.14 rating.

Most people hike to the summit rather than climb but go prepared for some scrambling – and exposure. The 11 kilometre hike gains 900 metres (2,953 feet). Except for a few short sections, the hike is almost always going up – and very steeply at times.

The first problem area is the chimney, reached after a solid hour of hiking. It’s not that difficult but it does require a few moves and a bit of muscling to make it through the narrow gap.

Then there’s a mix of trail covered in scree and rock ledges to reach the real crux of the hike – a narrow exposed ledge with a bulge. It’s made safer with chains bolted into the rock.

Many people turn back at the chains because of the exposure. Some people bring a harness and a few carabiners and clip in while others – like myself – move forward with concentration.

The section is short – perhaps 50 feet long in total, and the drop-off isn’t big but it’s enough to be unsettling. To get through it, hold onto the chains tightly and move your feet from toe hold to toe hold. It’s entirely doable but it can be nerve-wracking for many people.

The summit is reportedly only 300 metres from the chains, but it feels much longer. A few airy steps and some more climbing will have you on top 2.5 – 3 hours from leaving the parking lot.

I think the worst part through here is the possibility of rockfall, and I can see the value in a helmet. One girl dislodged a medium sized rock near my husband – and a collective “ROCK” rang out, though you really don’t have much time to react.

The summit isn’t big. On a sunny weekend for a good part of the year you will be sharing it with a dozen or more hikers, and even the occasional dog. From the top you can see the initial route down through the scree – the third problem on the hike.

The scree is actually quite fun – if you stick to the main route. Head through the thick scree – not the pebble sized stuff that will roll your ankle in a second’s break of concentration. I personally love scree when it’s thick and you can bound down it but if the scree is thinning that’s a whole other “kettle of fish” and one of my least favourite parts of hiking on mountains. If that’s the case I literally pick my way down a mountain slowly and don’t worry about what others might think of my  hiking pace.

Note that in 2020 several people have been injured in the scree section. In fact in July 2020 one man in his 30’s died in the scree section after a boulder dislodged and hit him. So when this hike opens again (Alberta Parks has closed it for now) treat it with the respect it deserves. Go prepared. Be supremely careful on the scree – and should you ever inadvertently dislodge a boulder (Heaven forbid!) YELL “ROCK”.

The descent off Yamnuska

The descent feels long and hot (bring two litres of water minimum on this hike) but parts of it are a whole lot of fun – especially the final big descent down the scree field you can see from the highway. John and I have both said we’ll never look at the mountain in the same way now that we’ve been down that slope.

I always find the last kilometre at the end of a hot day the most tedious. Although it felt good to be back on an easier trail with some shade, all I wanted was a cold drink and a pair of sandals by day’s end.

What should you bring for the Yamnuska hike?

Read: The 10 Hiking Essentials Everyone Should Carry

Getting to the Mount Yamnuska Trailhead

Drive the Trans-Canada Highway west to Exit 114 signed to Seebee. Head north on 1X to Highway 1A. Turn right (east) and follow the road about 2 km to the parking lot on the north side of the highway. It is signed “Yamnuska.”

The Yamnuska hike is more challenging than many. Fortunately it’s also fun as it offers a variety of hiking experiences. Before you go, ask yourself how you do with exposure. If uncomfortable wait till you gain more experience.

More mountain hikes that are close to Yamnuska 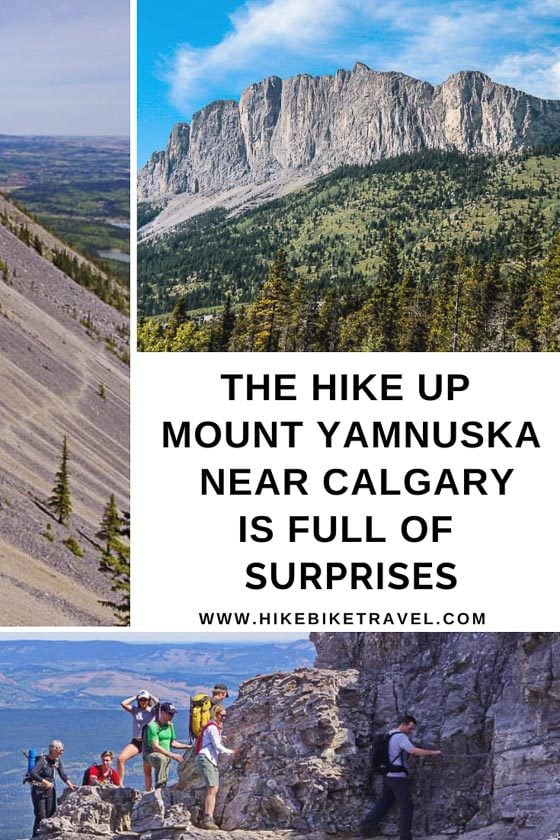