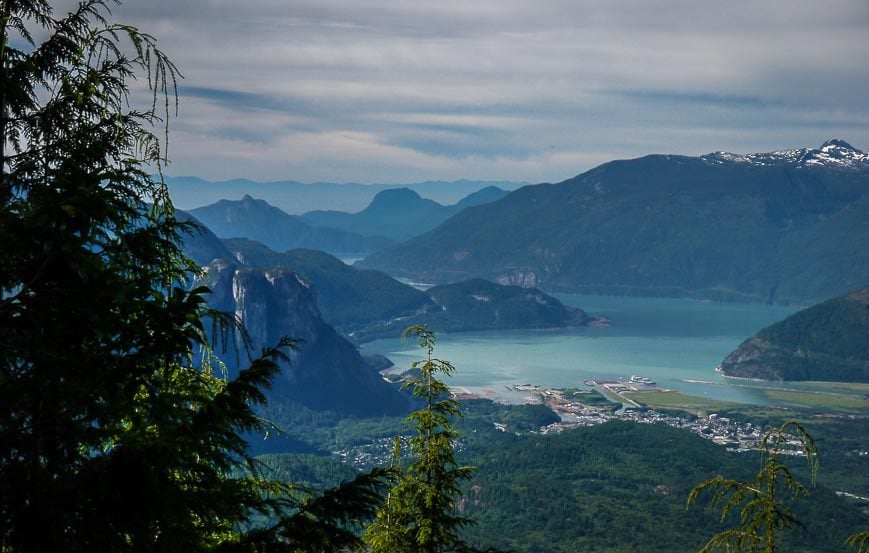 The Elfin Lakes hike in Garibaldi Provincial Park is a marvelous full day outing. Most years there are wildflowers in abundance and take-your-breath away beautiful mountain scenery – at least once you get past the Red Heather Shelter. But note, that the Elfin Lakes area holds its snow well into June – and even late August, as we discovered one year. It was a total shock to us.

In late August on the Elfin Lakes hike there were snowfields where usually there are trails lined with wildflowers. In past years when we’ve hiked the trail in July, there’s only been distant snow on mountain peaks. But record snowfall in winter, a cool spring along with a cooler than normal early summer didn’t allow for much melting. Most of the snow we hiked on will not have time to melt – but this fortunately is a rarity.

The first hour or so of the Elfin Lakes hike takes you up to the Red Heather Shelter along a gravel road. It offers peek-a-boo views of Squamish, the odd wildflower but little else.

It isn’t until you get close to treeline that the hike gets interesting. In years the snow stays late you need to be comfortable hiking on snow to make it to the Elfin Lakes. Snowshoes would come in handy.

I highly recommend carrying an ice axe, if you know its going to be snowy, so should you slip on a snowfield – and there are a few steep ones – you could self arrest, before hitting the rocks. No sense throwing in a trip to the hospital in with the hike.

What happens at treeline on the Elfin Lakes hike

Once above treeline spectacular views of the Tantalus Range unfold to the west. Going forward you’ll see Diamond Head, Opal Cone, Columnar Peak and Atwell Peak – plus a host of glaciers.

The bulk of the ascent is finished within 20 minutes of passing the Red Heather Shelter. Then you can enjoy some easy contouring, minor ups and downs and then a final short descent to reach the Elfin Lakes. This year the Elfin Lakes are still under a blanket of ice. Normally you can go for a swim in the lake!

Have a look at the lodge, built in the 1940’s by Joan Matthews, a champion slalom skier and world-class ski jumpers, Ottar and Emil Brandvold. They offered overnight accommodation and guided trips beginning in 1946. Thousands of people visited.

It operated until the late 1960’s when it was then sold to the province.

A shelter was built next to the lodge in 1975 – and it offers sleeping for 33 people in bunk beds.

You can stay in the Elfin Lakes shelter at Elfin Lakes. Or there’s the option of camping with 35 reservable spots not far from the lakes. The Red Heather campground also has 15 reservable spots. Check out the Garibaldi Provincial Park website as you must book online.

Options to extend the hike

There are options to extend the Elfin Lakes hike. Continue for another 11 kilometres, climbing an additional 570 metres to  reach Mamquam Lake. You used to be able to camp at Mamquam Lake, but that’s no longer possible. Instead camp at Rampart Ponds Campground, 1.5 kilometres before Mamquam Lake. I have read reports in the past that flies at Mamquam Lake were notoriously awful.

The hike to Mamquam Lake is best done as a backpacking trip as its 22 kilometres one way from the parking lot.

From Elfin Lakes you can do a couple of shorter add-ons. It’s another 6.5 kilometres one way to Opal Cone (the rim of an extinct volcano) with an elevation gain of 250 metres. You can see Mamquam Lake from the top of it.

Little Diamond Head is another option. It’s 7.0 kilometres one way with an elevation gain of 625 metres.

Dogs are not allowed. Bikes are – though some years you won’t get past the Red Heather Shelter because of snow.

Allow three to five hours one way to Elfin Lakes.

Getting to the Elfin Lakes Trailhead

The trailhead is reached by turning right (east) onto Mamquam Road at the north end of Squamish – by the Canadian Tire. Follow the road, which is mostly a dusty, rough gravel road, for 16 kilometres (10 miles) to reach the signed trailhead. Parking is free.

Further reading on things to do in British Columbia 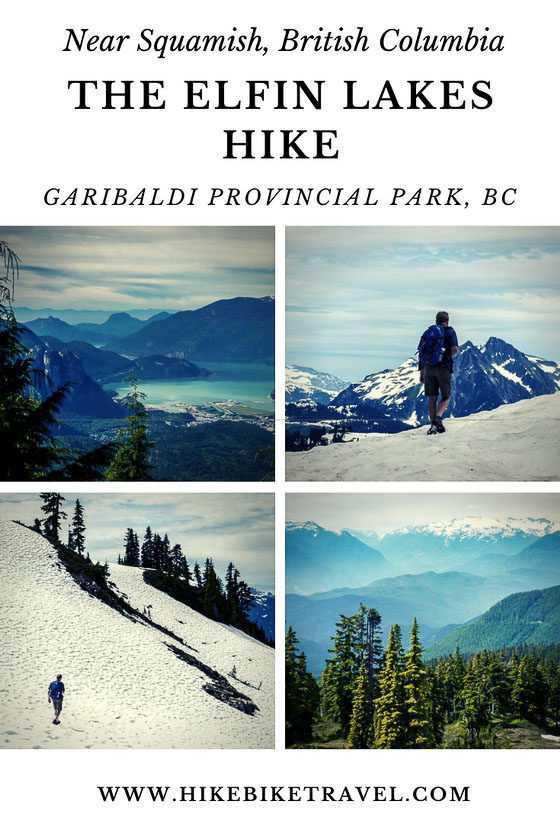 The Top 10 Outdoor Adventures in Newfoundland

Newfoundland is a phenomenal province to visit for outdoor adventures. Not only is the scenery…

10 of the Very Best Hikes in Arizona

The 10 best hikes in Arizona, at least in my humble opinion are described below.…