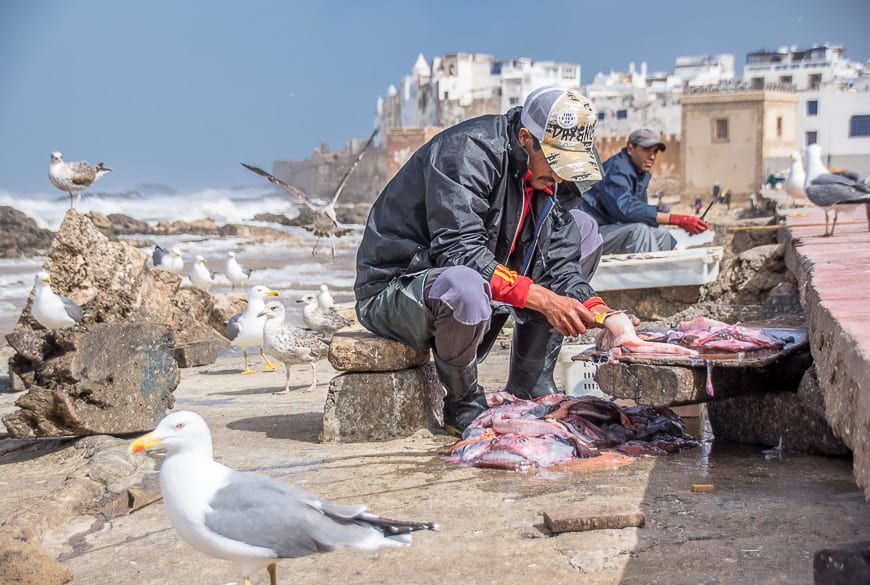 Things to Do in Essaouira, Morocco

Essaouira is a popular coastal city on Morocco’s windy Atlantic Coast. As a former Portuguese stronghold, it’s got a rich history along with plenty of culture, excellent restaurants and a laid-back beach culture that provides a lovely counterpoint to the busier pace of the medina. After spending several days in the city I would recommend these 5 things to do in Essaouria that we personally experienced.

Essaouira was our last overnight stop on our two week trip in Morocco. We stayed in the lovely Riad Perle d‘Eau with windows opening to beautiful views of the sea.

Even more incredible were the pounding waves that smacked the hotel the first night sending spray three stories up to our bedroom window. I wondered during the night if the hotel wouldn’t just break up and float away. Obviously it didn’t and we were able to enjoy two nights and a full day exploring the city.

This post includes some affiliate links. If you make a qualifying purchase through one of these links, I may receive a small percentage of the sale at no extra cost to you. Thank you for your support.q

Cover off these activities over several days

Many visits to Essaouira are often done as a day-trip from Marrakesh. That’s not something I would recommend. Instead spend a night or two here and enjoy all that you can do in Essaouira. It’s so much quieter than Marrakesh that many of you will enjoy the peacefulness, the ocean and the lack of smog.

Located immediately southwest of the Medina, the fortified harbour is a hive of activity and colour. Look for the traditional blue boats, gulls galore and fisherman unloading and then gutting their catch. Right beside this area is the Essaouira Citadel.

There’s a nominal entrance fee. Photographers will love this place. Be sure to go to the high point of the citadel for the view.

Stroll the medina in Essaouira

The old town or medina, a UNESCO site, is protected by 18th century ramparts and offers both superb views of the ocean and a chance to explore the winding, mostly cobblestoned streets.

I much preferred this medina to that of Marrakesh. You don’t feel nearly so closed in; sellers don’t hassle you; and there are lots of little cafes where you can pop in and just watch the world go by.

Entrance to the Medina is via one of the old gates – also known as babs. This is a simple Medina to navigate and after just an hour of walking you’ll have it all figured out.

Essaouira is famous for its beaches and one of the main reasons to visit the city. It’s a quick walk from the medina to get to the beach. If you’re hungry on your way stop at the collection of fish restaurants just outside the medina gates.

The beach stretches approximately 10 kilometres along the coast to reach the sand dunes at Cap Sim. There are places where the current is dangerous so before hopping in the water find out if it’s safe.

When we were there the wind was howling, which is the norm not the exception and the reason the city is famous in windsurfing circles. There is also lots of surfing along this stretch of coast.

It was great fun to explore the ramparts on a wildly windy day. Locals and tourists alike enjoy superb views of the crashing waves from a perch on a cannon – just outside of the Medina where it meets the Atlantic Ocean.

Built in the 1760’s by a French military architect Theodore Cornut, the walls of the rampart were there to protect the port from raiders. Walk from Skale du Port at one end to Skale du Ville at the other and admire 19 bronze cannons.

If you’re a movie buff check out the 1952 Orson Welles film Othello. You’ll recognize the rocks in the opening shot.

There are a couple of popular activities that we just didn’t have time to do.

Learn how to make a delicious tagine by signing up for a cooking class. Likely your hotel can arrange this.

Enjoy a traditional Hammam – basically a relaxing social bath. Follow that up with a massage using the local argan oil.

Birders should try and make it to the Île de Mogador, a sanctuary for Eleanora’s falcons. They travel from Madagascar and come to these islands to breed from April to October.

Many people rent cars in Morocco and the roads are generally really excellent. If you are driving into or out of Essaouira you’ll find the scenery to be quite lovely. 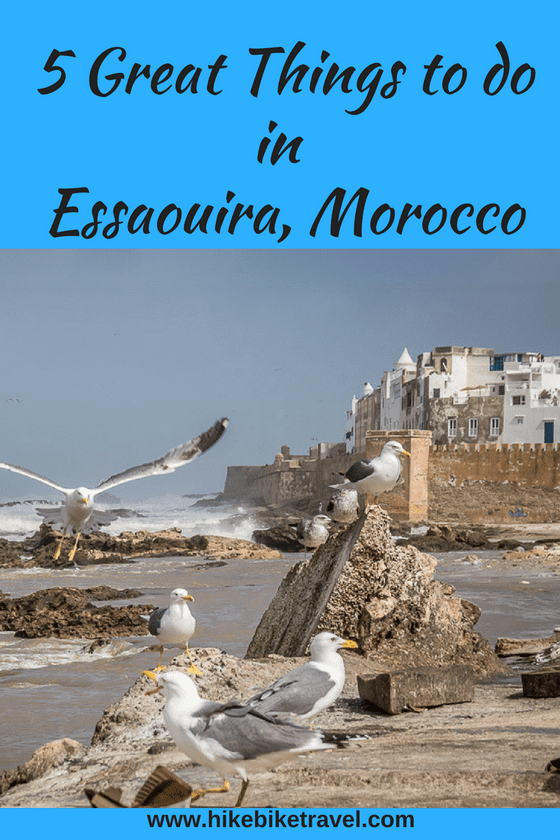