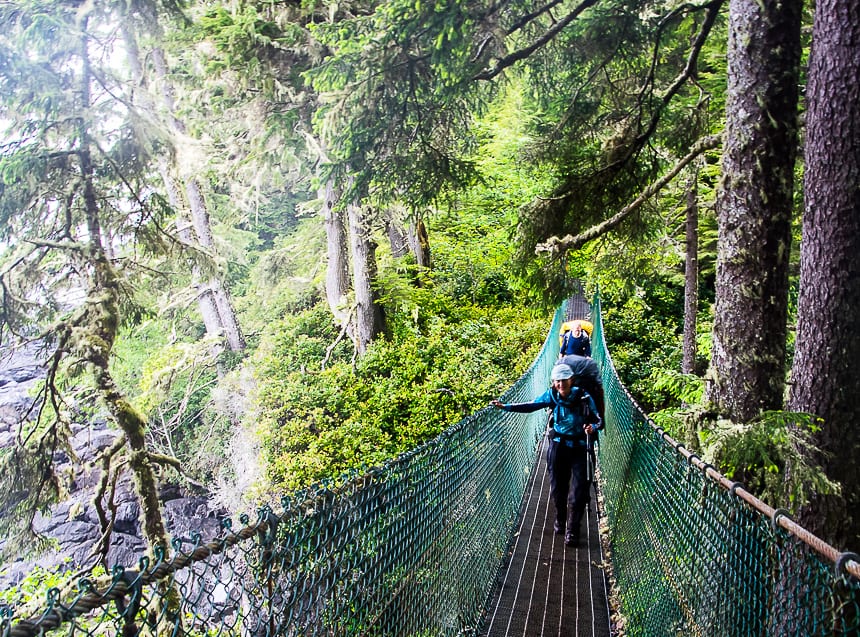 A 4-Day Hiking Trip on the Juan de Fuca Trail

Interested in a four day hiking trip on the Juan de Fuca Trail – a cousin to the better known West Coast Trail? Located on the west coast of Vancouver Island, just 90 minutes from Victoria, the 47 km Juan de Fuca Trail runs parallel to the coast dodging and weaving through temperate rainforest and along rocky beaches.

The trail goes all the way from China Beach to Botanical Beach just outside of Port Renfrew. It crosses over a dozen streams and rivers in a single day. It’s rarely flat and it’s often muddy.

But its got more than it’s share of rewards including magical sections of forest with massive trees hundreds of years old and some truly gorgeous beach walking and campsites. It’s a busy trail in summer. Unlike the wildly popular West Coast Trail you don’t need a reservation and the $10 per person per night fee is for camping only.

Read: The Juan de Fuca Trail: What You Need to Know

Our group of three started off as most do, all smiles and no aches. Seven hours and 14 kilometres later when we dropped our packs on the forest floor at the Little Kuitsche Creek campsite we were ready for a foot massage and a glass of wine. A hot shower would have been nice too.

This day was the toughest, at least for me. Part of it was the length and getting used to carrying a pack again. But mostly it related to the mentally tiring, endless sections of mud. There were fewer views on this section of the trail so it felt like a hard slog for many of the hours.

There’s always a silver lining and for me it was the magical, almost mystical sections of open forest with big trees. And as always, there is that wonderful sense of accomplishment after beating up your body for seven hours straight.

On the second day we planned to hike 12 kilometres to reach Chin Beach, though if we’d had time Sombrio Beach would have been a great spot to hang out for an extra night. The hiking again was tough but at least it was interesting.

We got lucky and hit low tide for a long stretch of beach that was very similar to Botanical Beach. Then we had some flat easy walking in and around Sombrio Beach before the trail started undulating through the forest again on a mostly upwards trajectory.

There had to be a solid 60 to 90 minutes of muddy hiking and just when you thought it would never end – a long, dry flat section appears, almost like a mirage. We enjoyed every minute of it.

Three suspension bridges along the way broke up the hike and offered stellar views. And the last half kilometre to the campsite at Chin Beach was a treat – as was Chin Beach itself. Camp high here or you’ll be swimming at night. It took us approximately six hours to do this section.

“Dreadful, just dreadful” bemoans a hiker as he stops to chat before looking for a campsite on Chin Beach.

All three of us expected the Chin Beach to Bear Beach section to be brutally hard, judging by the stooped frames and the tired look of hikers walking past our campsite on Chin Beach.

But the three of us – all of whom are in good shape – really enjoyed it because there was far less mud. What you do have to do is ascend and then descend about a dozen creeks and rivers. Sometimes it’s very steep, sometimes not, but there is a rhythm to the day and you can count off your progress.

We knocked off the 12 kilometres in 5.5 hours whereas the hikers we spoke with took upwards of eight hours. No wonder they hated this section.

This is where your aerobic conditioning program pays off. And when you see the runners attempting to do the whole trail in a day, you’ll be in awe at what the human body can do with a little training.

The last part of the Juan de Fuca Trail – a 9 km stretch – was definitely the easiest. And it took just four hours to complete. There was far less mud with next to none at all on the last two kilometres from Mystic Beach to the parking lot.

But there was still plenty of up and down and stretches of slippery logs. Peek-a-boo ocean views occurred with some frequency. But like many trips the last day is anti-climactic and you’re really just ready to be finished.

We did linger over lunch at Mystic Beach but already we missed the solitude and peace we had enjoyed so much on the trail. Finishing on a cloudy weekday, instead of a sunny Sunday, without the throngs of people would have eased our way back into civilization.

But by the time we reached the parking lot we were all smiles and pretty darned pleased with ourselves.

I highly recommend the trail – but do go mentally prepared for rain and mud. It’s a rainforest after all and though sun is always a bonus, you can never count on it. 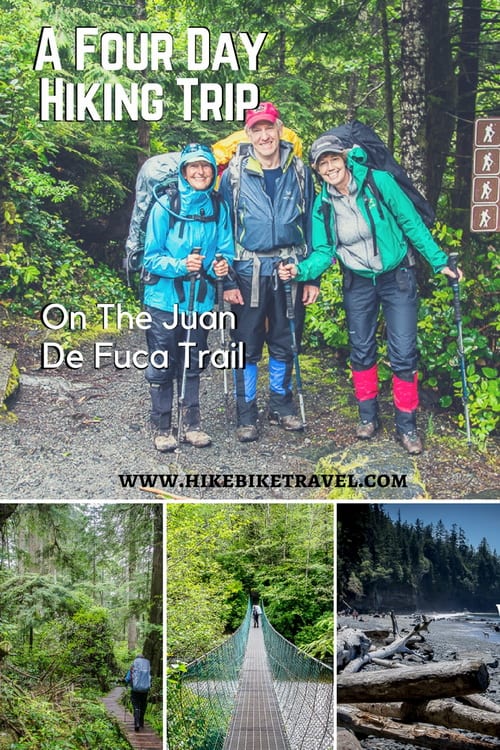 Thank you to Tourism Vancouver Island for help with this awesome trip.