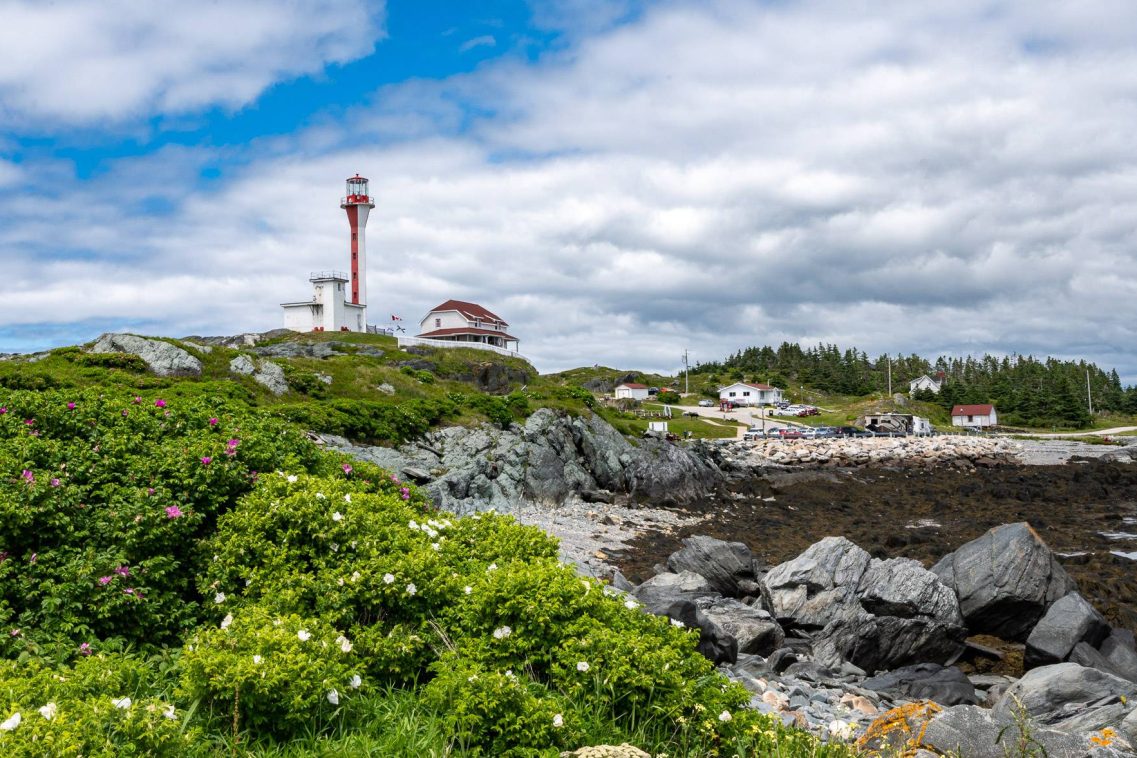 One of the top things to see and do near Yarmouth, Nova Scotia

There aren’t many mornings I wake up at 10 AM, roll over and think to myself, I have no agenda, no must do’s or phone calls, so I’ll just sleep for as long as I want. The backstory to my late morning wake up was a direct flight from Calgary to Halifax, followed by a two hour wait for a shuttle and finally a three hour shuttle to Yarmouth in western Nova Scotia. I was in town for a travel media conference, but since nothing was happening until evening, I had a delicious day where I could do whatever I wanted. I Googled best things to do in Yarmouth – because that’s what we all end up doing, and a visit to the Cape Forchu Lighthouse was the top thing to do. I figured I could taxi out, and walk the 11 kilometres back to Yarmouth, and get some much-needed exercise.

When I emerged in the hotel lobby, I bumped into two colleagues who were literally on their way to the lighthouse, and even better – one of them had a rental car. So. in I hopped, before I’d had my first cup of coffee for the day. However, we had all figured out that there was a café at the Cape Forchu Lighthouse – and lobster rolls were on their menu. That was reason enough to go and I was certain I’d find my cup of joe there.

The drive out to the lighthouse is scenic, especially in summer when colourful lupins are everywhere – and their beauty screams to you to stop the car, jump out, and take a picture. Throw in a picturesque beach and you could easily spend a solid half day on this one Yarmouth activity.

The drive to the Cape Forchu Lighthouse

It’s all of a 17-minute drive to get to the lighthouse from downtown Yarmouth. The Cape Forchu Scenic Drive is a pretty one, especially the closer you get to the lighthouse. One of the unusual sights on the drive was a massive retaining wall. I can only imagine the sight of smashing waves against the wall in a winter storm. You also pass the Fish Point Monument, a working fishing wharf, and a view to the Bunker Island Lighthouse.

After we passed Lobster Pound Road, I started salivating at the thought of my upcoming lobster roll. In fact, we all had lobster on our mind.

Get a bite to eat at the Keeper’s Kitchen café

We made a beeline to the Keeper’s Kitchen cafe – to avoid the crowds, but the bottom line was that we were hungry. Walking up to the cafe, I couldn’t help but admire the view. If your timing is right, you can see The Cat ferry – a service that is finally back again after a two-year hiatus thanks to COVID. The 3.5-hour long ferry runs between Portland, Maine and Yarmouth, Nova Scotia.

Inside the cafe are cute tables with views – but what the cafe didn’t have were lobster rolls. Apparently fellow travel media members who were on a pre-trip in the area had reserved all the lobster rolls – a crushing disappointment to the three of us. I made do with an open-faced smoked salmon sandwich and a strawberry scone that was closer to a strawberry shortcake. I’m sure there were a few more patrons that were disappointed that day.

Note that the cafe is open seasonally every day but Tuesday. On Monday it is only open 11 AM – 3 PM, but the rest of the time it is open from 11 AM – 5 PM. You can also enjoy local beer and wine in addition to seafood chowder, pizza and baked goods.

The Cape Forchu Lighthouse, called an apple core lighthouse because of its unique design, is the only one in Nova Scotia that can be climbed. The lighthouse is the second most photographed lighthouse in the province after the one in Peggy’s Cove. Its location on a rugged peninsula overlooking the Bay of Fundy, 37.5 metres above sea level, ensures stupendous views year-round. And you can visit year-round and at all hours of the day.

If you can climb 77 steps, then you can book a tour online to get to the lantern room at the top. But because of its small size, only six participants can visit at one time. My friend Sue from Travel Tales of Life did the climb with her husband and has this to say. “The ever spiralling 77 step climb to the lantern room of the lighthouse leads to panoramic views of Cape Forchu, Yarmouth Harbour and the Atlantic Ocean. All tours are accompanied by a guide who will assist anyone feeling claustrophobic in the narrow stairwell.”

***If you love dark skies, check out Sue’s Deep Sky Eye Observatory experience that included sleeping in bubble-shaped glamping tents, a short drive away from Yarmouth.***

If you’re short on time, enjoy a quick wander around the property, enjoying views of the Cape Forchu Lighthouse, from different angles. Admire the flowers and check out the gift shop. If mobility is an issue, there is a free golf cart shuttle service.

From the photo taken at the top of the lighthouse, you can see the Leif Erikson trail in its entirety. The trail is named for the son of Norse explorer Eric the Red, who may have visited these shores around 1000 AD. The discovery of the Yarmouth Runic Stone in 1812, begs the question – are the 13 characters engraved in the stone Norse runes, or is the stone from somewhere else?

The Leif Ericson trail is short and easy – but also very scenic and incredibly worthwhile. Make your way down to the trail from the parking lot – stopping to admire the 50-foot skeleton of Foggy the fin whale. Continue as the trail winds past an assortment of wildflowers, including some that were used as edibles (and still are) such as Scotch lovage/seaside parsley, sheep sorrel, caraway, beach pea, and rose hips from the salt spray rose.

A visit to the lighthouse deserves to be number one of the things to do in Yarmouth. If you’re anywhere near the town, make the drive. Taxis will take you out there – and no I didn’t walk back. Instead I had a nap and saved a big walk for later in the week.

Where to stay in Yarmouth

I stayed at the Rodd Grand Yarmouth. It was a bit tired but reportedly will be fully renovated in the coming months. A great location.

The Best Western Mermaid is another decent choice.

Tru by by Hilton Yarmouth is rated fabulous.

If you prefer a B&B experience check out the Lakelawn B&B. 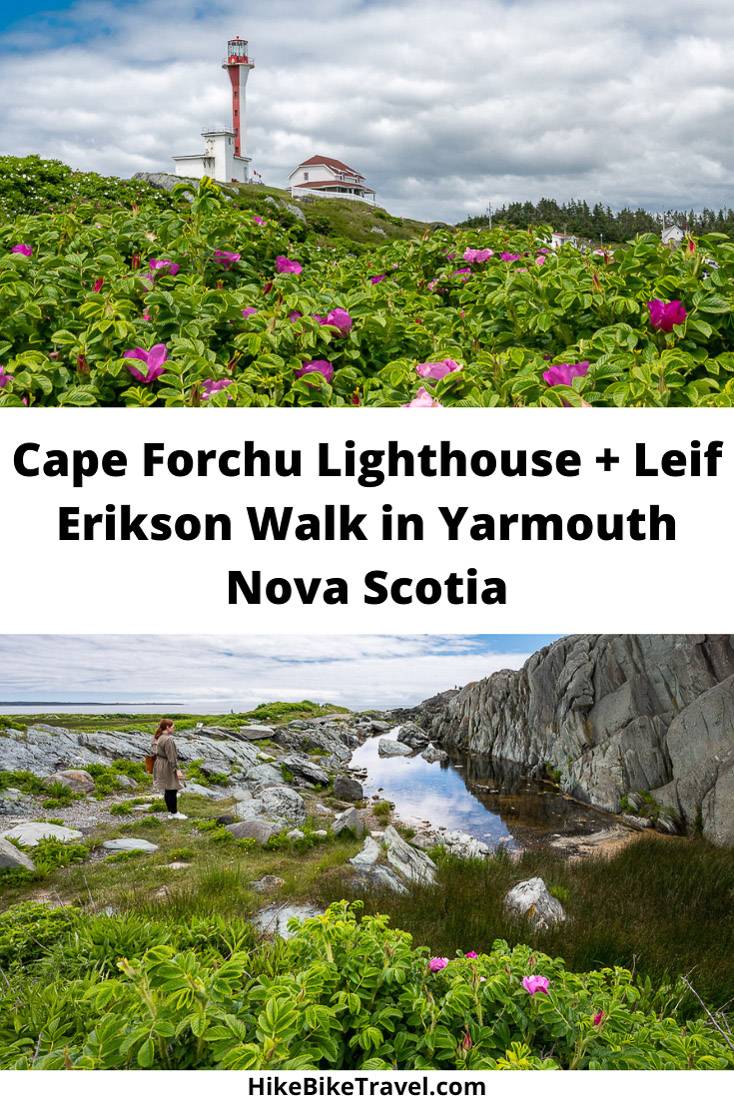