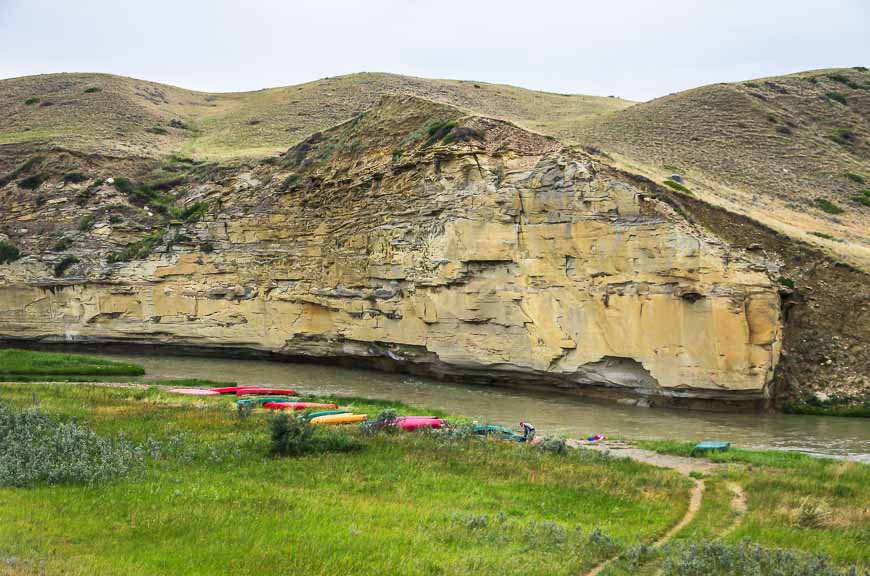 John and I along with my brother, Geoff spent a long weekend canoeing and kayaking the Milk River in southern Alberta. It’s a river known to be shallow and loaded with rocks. In fact on the second day you have to negotiate the better part of 33 kilometres through what are called the rock gardens. Somehow my brother missed my description of the river and figured he was heading out on a leisurely flat water paddle.

My brother paddled a TRAK kayak for the first time – on loan from the company located in Airdrie, Alberta. As they describe their kayak – it’s a folding ocean sea kayak – and nowhere in their literature does it say choose this boat if you want to play in a rocky river with up to Class III rapids.

Geoff had driven up to Airdrie the night before to learn how to put the boat together. The owner can unpack it from its hockey sized bag and have it sea worthy in six minutes. Certainly on a first pass, Geoff was not so fast. Although I didn’t time him, I’m guessing it was 30 minutes. He said in the future, it would take him a fraction of the time.

A boat in a bag

All pieces to make the 16 foot kayak are in a bag that weighs 63 pounds. It easily fits into the back of a car. To assemble the boat, it’s a matter of putting the front and rear supports together and then gently shoving them inside the military grade polyurethane skin of the kayak.

The cockpit with a comfortable seat are then easily attached. Once the boat was assembled it could pass as a fiberglass kayak from afar.

There are two flotation bags inside the kayak – a front and a rear that double as gear bags. Though items at the very front or back aren’t always easy to reach (as in any other kayak), it is an ingenious system.

Easily change the profile of the Trak kayak

One of the features Geoff particularly liked was the easy way of changing the the profile of the boat on the water via a pump jack in front of the seat. Simply add or release air depending on the conditions. It lies flat on the bottom of the boat when not in use and never got in the way.

My brother is a stickler for quality. He was very impressed at the thought that went into the design and the materials that were used. It’s extremely well constructed and durable. He did get one small hole – but a stop along the river and a duct tape patch solved the problem for the next 40 kilometres.

Lest you think this is a common experience it is not! In fact we were told a hole of any type had only occurred on one other occasion in eight years of harsh testing. My brother suggests it could be because of the following:

My take on it is that the hole location is possibly located on the small ‘nub’ (my wording!) on the rear rib. I presumed a rock had somehow pinched the skin against that hard ‘nub’?

The product development engineer believes it was caused by metal – and considering there is a lot of barbed wire fencing in the water because of erosion, that too is a possibility. The good news – it was patchable with the most basic of equipment, the patch stuck, it was a snap to fix and it was a non-issue.

The TRAK kayak was a dream in river rapids

My brother is also a natural athlete (alas I am not) so had no trouble handling the whitewater and the rapids – his first experience ever. In fact, he was whooping through the rapids as he was having so much fun – and actually got bored when we were on the flat water. The kayak handles quickly and well. And it moves a whole lot faster than a canoe.

The bottom line with a TRAK Kayak

If you’re looking for a PORTABLE, extremely well-made boat – even on rivers with rocks and rapids then this is a great option. It’s not cheap. Expect to pay around $US2800 but you get what you pay for.

For more information on TRAK kayaks visit their website. It’s full of technical information if you want to learn more about the specs of the materials

Further reading on where to go kayaking