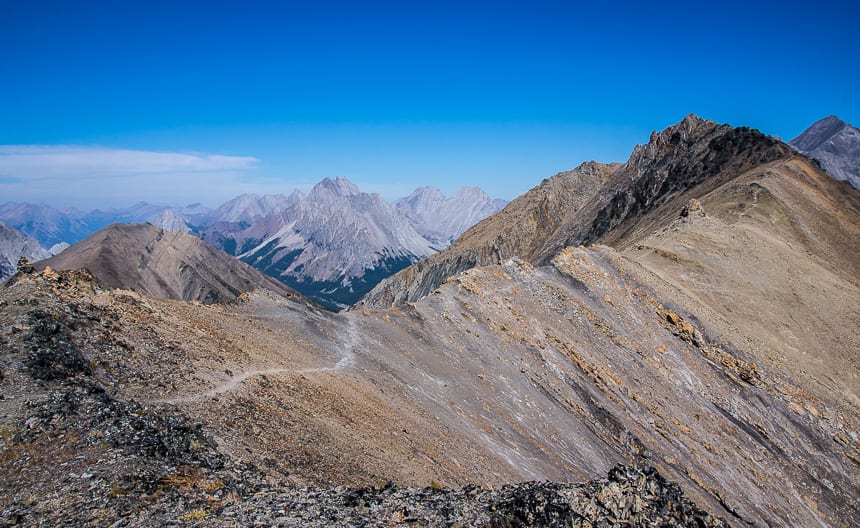 One of the best hikes I’ve now done in Kananaskis Country is the one to the summit of Grizzly Ridge via Grizzly Col from the trailhead at Highwood Pass. (In Gillean Daffern’s book it’s called Grizzly Peak but there is another shorter Grizzly Peak that begins on the north bank of Ripple Rock Creek on Hwy 40.) The 360° views from the top are outstanding.  Even though the trail isn’t signed at all, it’s obvious once you know what you’re looking for. If you’ve ever done the Pocaterra Ridge hike, you’ll have no problem finding the turnoff to Grizzly Ridge.

Finding the trail to Grizzly Peak in Kananaskis

Park at the Highwood Pass parking lot in Kananaskis Country. Note that the road over Highwood Pass is closed from December 1 – June 15th. There is a washroom here and a well-signed trail to Ptarmigan Cirque.

Finding the trail is the crux of the hike as the scramble on the summit ridge isn’t as daunting as it looks from afar.

From the Highwood Pass parking lot start on the same trail that hikers take to reach Pocaterra Cirque. After you’ve hiked all of a few hundred metres from the parking lot, turn left onto an unsigned trail that runs through a muddy section heading for the woods. Before you start look up and off in the distance you can see Pocaterra Ridge. That is the general direction you need to go.

The route to Grizzly Ridge

Stay on the trail as it crosses a creek, picking your way across muddy sections. Don’t take any trails to the left early in the hike. You need to pass Pocaterra Tarn before you start even thinking of turning off.

The trail is undulating initially and then it starts to climb, though only moderately. Cross avalanche slopes filled with wildflowers. Definitely make some noise through here. So far I have never seen so much as bear scat in the area but grizzlies are known to hang out around Highwood Pass.

Continue on the obvious trail to Pocaterra Tarn. Remain on the trail until you see the rocks in the photo below and then turn left. (It’s not a big pile of rocks but the trail looks substantial. If you go right you’ll end up heading for Pocaterra Ridge.)

From the turnoff head up through trees and onto a grassy slope. You’ll be able to see the fourth summit along the Pocaterra Ridge trail. Continue up on the well-defined trail that becomes very scree-like the higher you go.

It gets hot through here with all the black rock. Catch your breath at Grizzly Col and take in the view before continuing up towards Grizzly Ridge. You may see some people scrambling up the very steep Mt. Tyrwhitt on the right.

The hike up from Grizzly Col to the ridge is short – perhaps 15 minutes at most. Once you reach the ridge turn left and follow the well-traveled trail, scrambling up and along a very rocky section for the last 100 metres or so.

There are lots of handholds and it’s really not so difficult. The reward on the summit are views stretching for miles in all directions. Return to the ridge for a well earned picnic lunch.

Further reading on nearby hikes 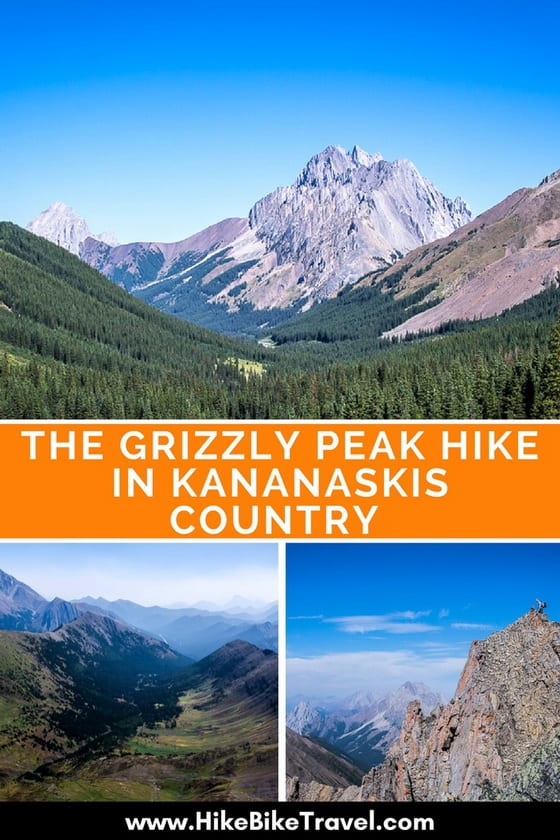