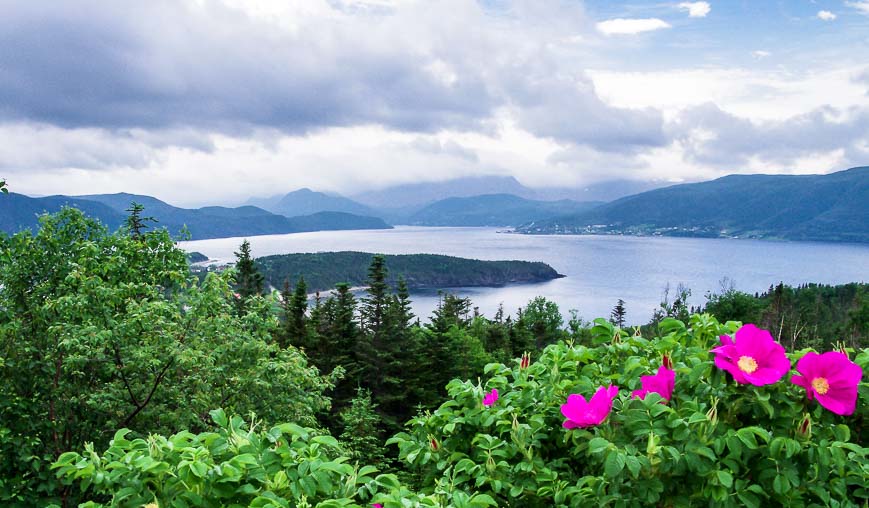 Newfoundland is a phenomenal province to visit for outdoor adventures. Not only is the scenery exceptional, especially along the coast and in Gros Morne National Park, but the people are so friendly and welcoming that they are reason enough to go. Over a couple of summers, I have spent almost a month in Newfoundland. Here are what I think are the top 10 outdoor adventures in Newfoundland – not including fishing, whale watching or diving.

Running from Cape St. Francis in the north to Cappahayden in the south, the East Coast Trail offers 265 kms of rugged coastal scenery via a series of 24 connected paths, each with its own northern and southern trailhead.

Along the length of the trail you are treated to fjords, cliffs, headlands and sea stacks. You hike past Cape Spear, the most easterly point in Canada and with luck, and depending on the time of year, you’ll see icebergs and whales. Lighthouses, ecological reserves, abandoned settlements and wildlife encounters are also in the cards.

You can hike sections individually or you can take 10-14 days and hike the whole trail. Join a scheduled day hike led by a member of the East Coast Trail if you’re just visiting St. John’s for a few days. 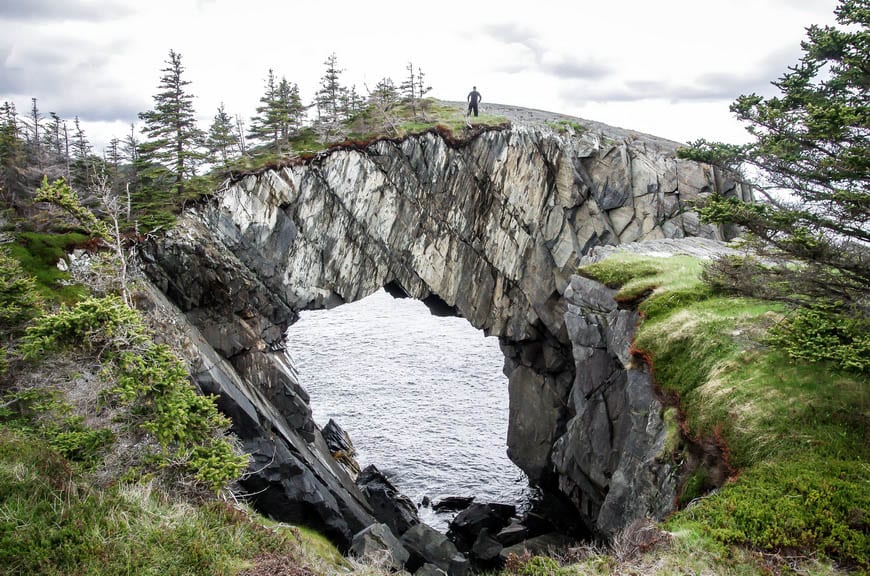 According to John Vivian, the founder of the trail, it offers more scenery per linear foot than any other trail in Newfoundland. It’s best hiked in a clockwise direction so you can take advantage of the views of Trinity Harbour as you hike south from Skerwink Head. 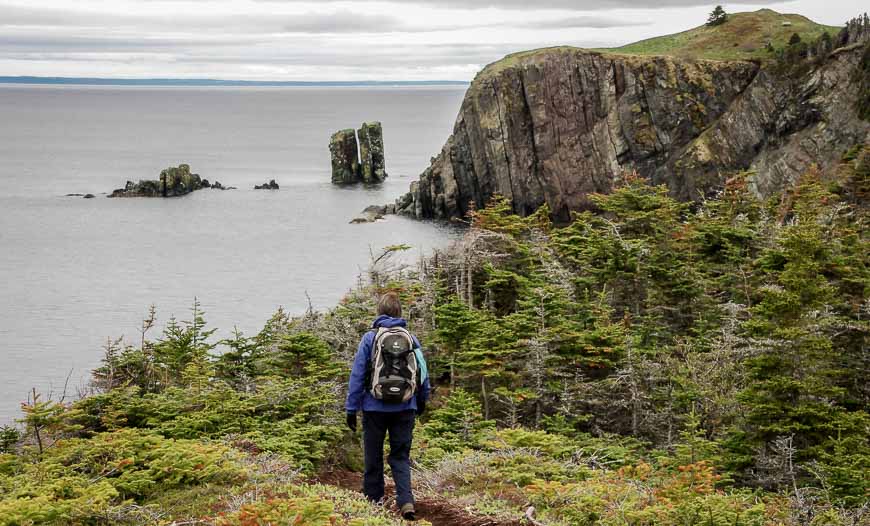 Gorgeous hiking on the Skerwink Trail

Starting in Deer Lake and finishing in St. Anthony’s near the tip of the Great Northern Peninsula, the challenging 600 km Viking Trail takes you by road along the rocky, barren coast through a series of sparsely populated but picturesque fishing villages.

Allow a week to do it but if you have time, add another two days – for a side trip to Labrador and a visit to L’Anse aux Meadows, a UNESCO site. For yet another diversion, take the super scenic boat ride on Western Brook Pond in Gros Morne National Park. 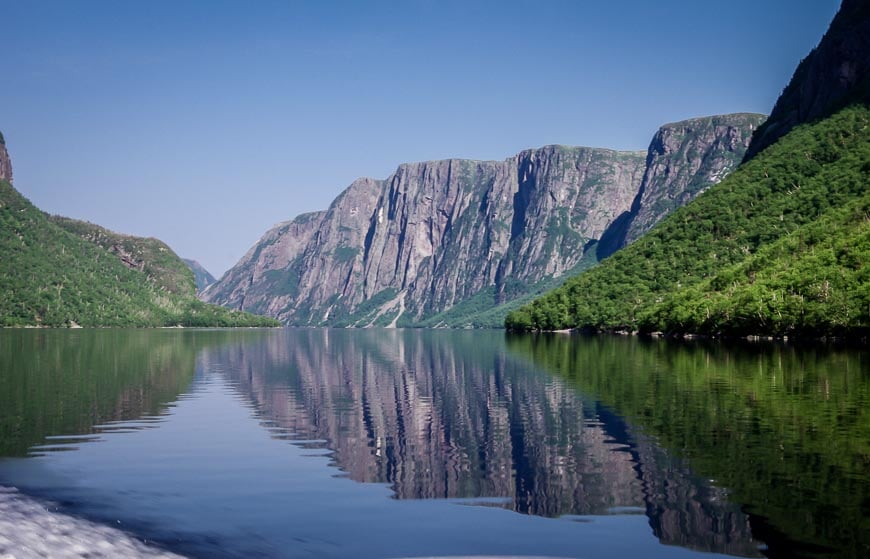 #4 Kayak with Icebergs in the Twillingate area

Twillingate is one of the few towns in Newfoundland where iceberg viewing and kayaking come together. The peak viewing time is late June though the number of icebergs varies greatly from year to year.

Hire a guide for a safe experience – and revel in the majesty and the beauty of these behemoths as you approach at eye level. Keep a respectable distance away – either twice the height or the length of the iceberg. 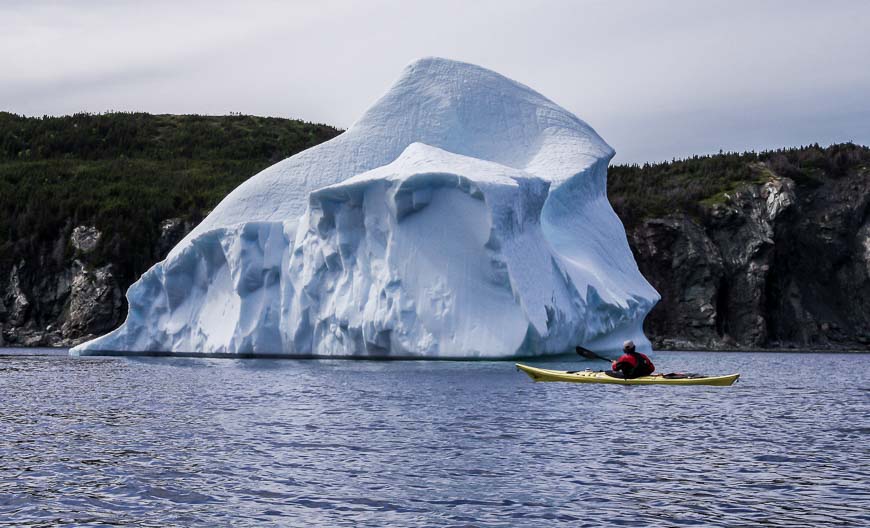 Getting closer to the iceberg than I care to be

Although Terra Nova National Park lacks the grandeur of Gros Morne National Park, it does offer the chance to see the Boreal forest where it meets the North Atlantic Ocean. With over 100 kms of trails, you can choose from short strolls to an epic 48 km backpacking trip.

But for a taste of ocean and forest, you’d do well to choose the 9 km Coastal Trail. It can be completed in half a day, but you might find yourself lounging on a beach and getting back to the trailhead later than expected. 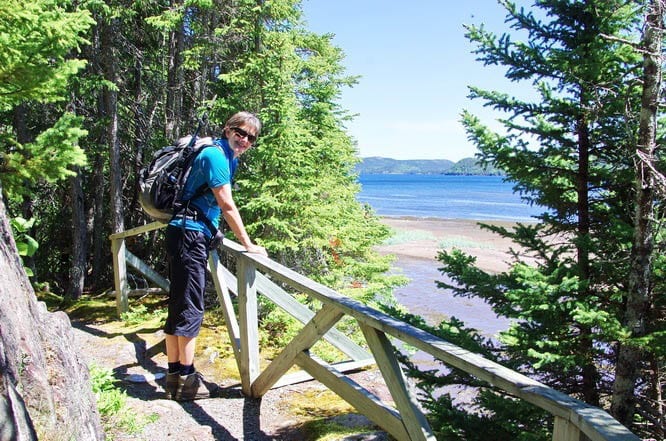 #6 Hike to the summit of Gros Morne Mountain

If you only have time for one hike in Gros Morne National Park and you’re fit then hike to the summit of Gros Morne Mountain. You will be rewarded with stupendous views of Ten Mile Brook Pond, the Long Range Mountains and Bonne Bay.

To reach the summit, you must hike for the better part of four hours, and climb 800 m (2, 2625 ft). The return is no picnic either. But for incomparable views and the chance to stand on the second highest peak in Newfoundland at 806 m (2,644 ft), it’s well worth the effort.

Read: A Hike to the Summit of Gros Morne Mountain 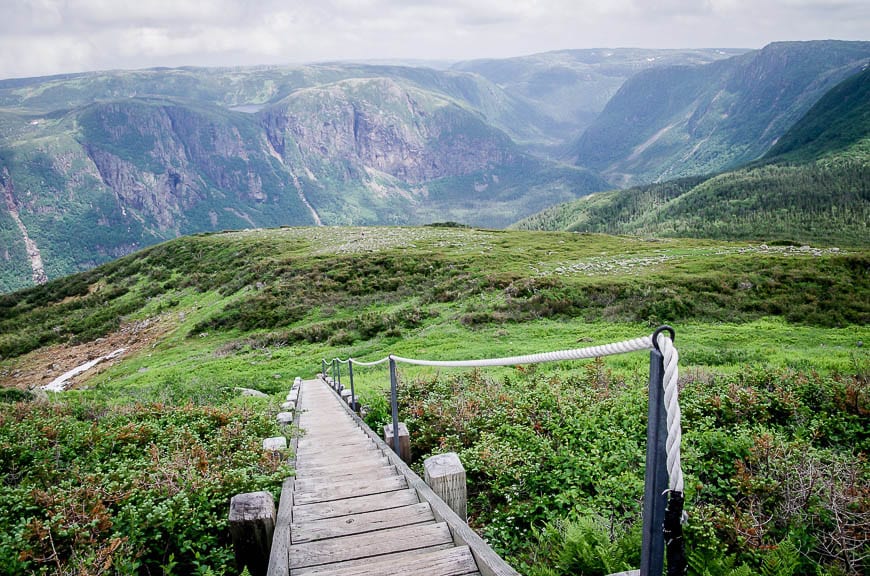 #6 Adventures in Newfoundland – Kayak the fjord of Bonne Bay

Hopping in a kayak and exploring the fjords of Bonne Bay in Gros Morne National Park is another great half day adventure.

Either rent kayaks and explore on your own if you’ve got the experience or join a guided tour with Gros Morne Adventures. Keep an eye out for minke whales and bald eagles, both of which I saw on one occasion. 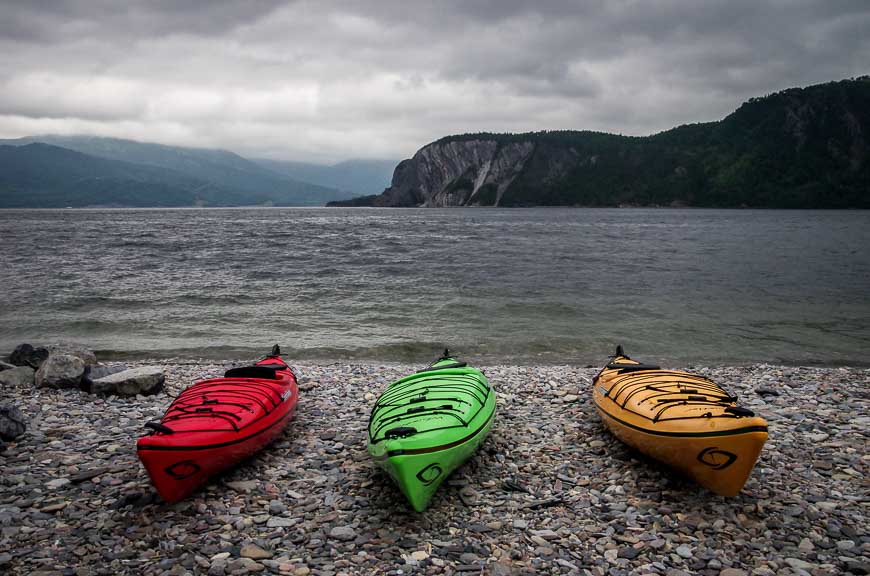 Considered one of Newfoundland’s best kept secrets, the Alexander Murray Trail in King’s Point takes you on an 8 km round-trip hike that includes 2,200 stairs and an elevation gain of 335 m (1100 ft). It’s well marked and maintained.

Don’t miss the descent to Corner Brook Gorge and waterfall, especially on a hot day. The summit offers exceptional views of the surrounding area. In fact on a clear day in late June you may even see icebergs in the distance. 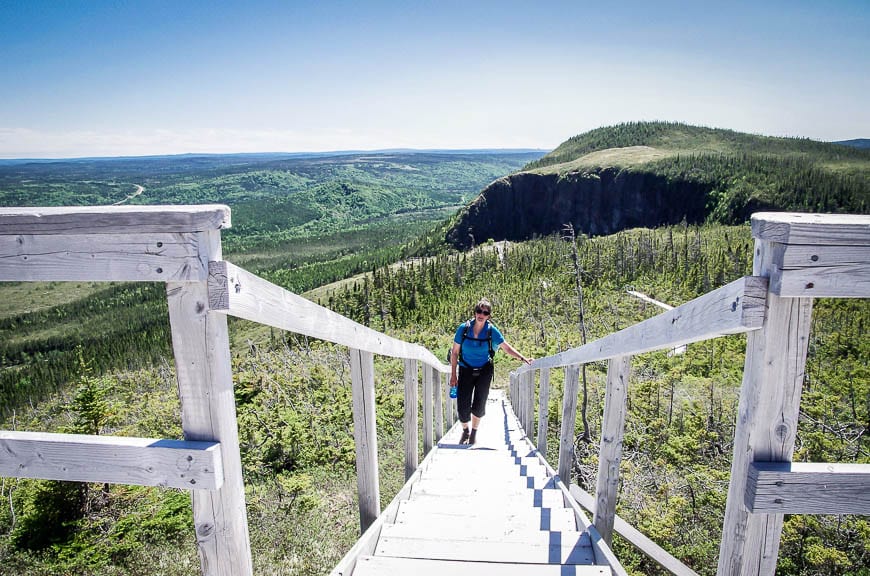 My friend Judy thinking enough already with these stairs

If you’ve ever seen a print ad from Newfoundland Tourism, then there’s a good chance it’s a photo taken at the top of the gorge – and exactly what you’ll see on the first day of the Long Range Traverse.

This challenging backpacking trip – that requires a navigation test – takes you over the course of 3 – 5 days through world-class scenery that includes phenomenal views of fjords, a disorienting landscape of tuckamore (impenetrable small trees), numerous rock covered plateaus, rolling hills that are too numerous to count and plenty of lakes, ponds, streams and rivers. 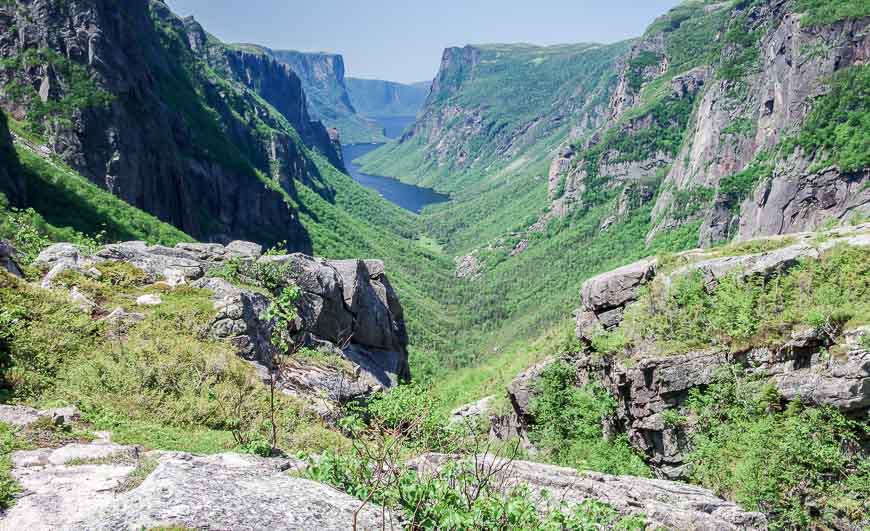 Kayak around the Witless Bay Ecological Reserve where you can experience the rugged coastline of Newfoundland complete with puffins, whales and even icebergs in season. Stan Cook Adventures is the operator in the area. 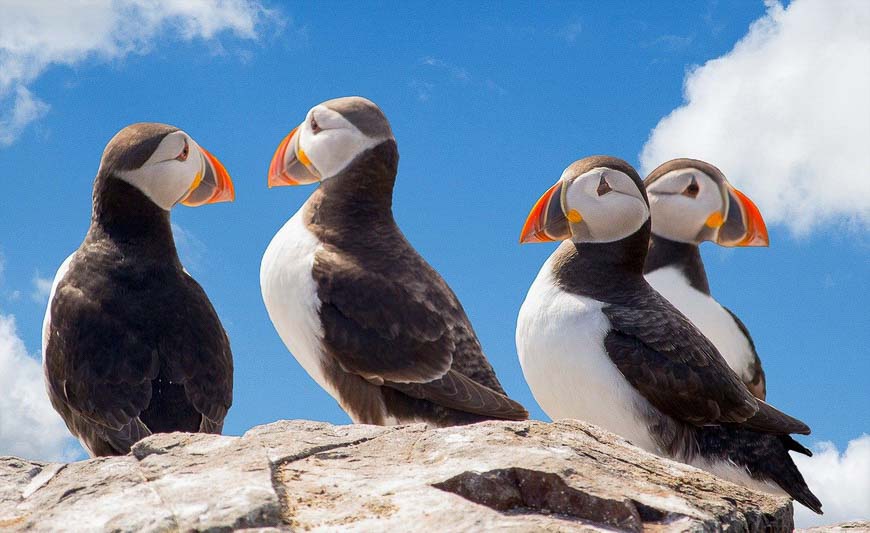 It’s worth a trip to Fogo Island for a lot of reasons – with rocky hiking just one of them. Don’t miss the hike to Brimstone Head – one of the four corners of the world according to the Flat Earth Society.

It’s short and sweet but the views are terrific and it’s easy to combine it with other loop trails in the area. Another excellent choice is the 8.5 kilometre Turpin’s Trail in Tilting that takes you by the first ground radar station in North America. Don’t forget your rain gear.

Read: What to do on a trip to Fogo Island, Newfoundland 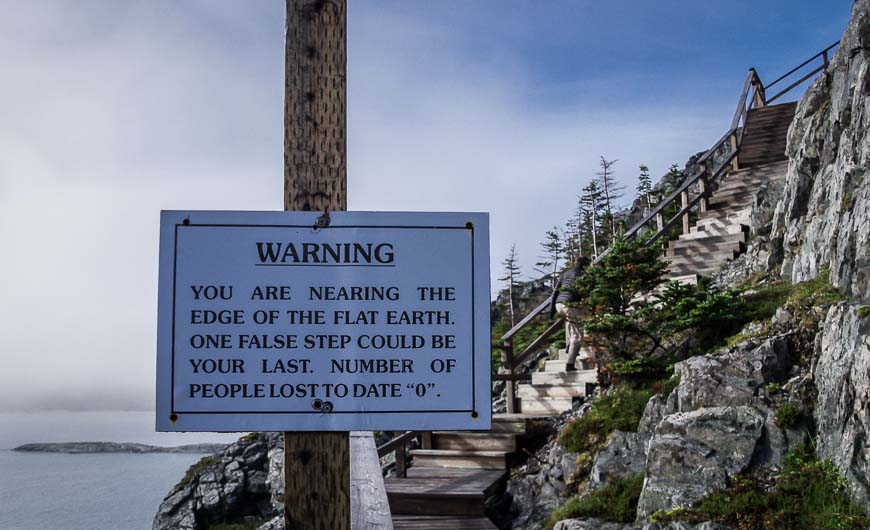 Hiking to the edge of the Flat Earth, Fogo Island

There are many more hiking opportunities around the province, particularly in the Corner Brook area from what I’ve heard though I’ve yet to visit. If I owned my own kayak I’d grab some charts and head off to explore some of the protected waters near Twillingate where I think there’s some magical kayaking waiting to be discovered.

Further reading on things to do in Canada 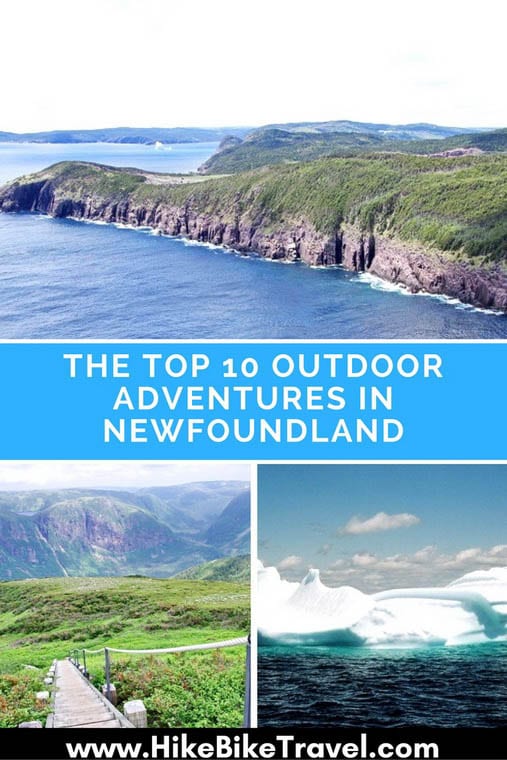 It was only recently that I tried a fat tire bike. Three opportunities to ride…