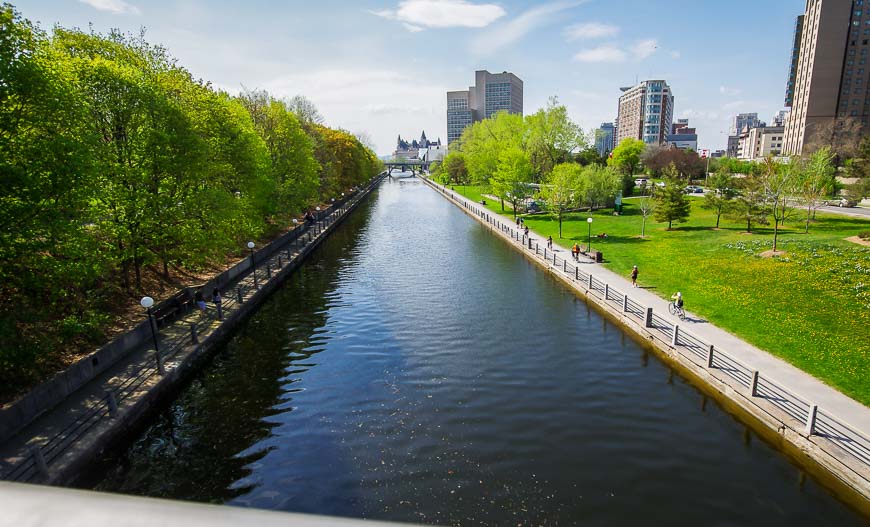 Cycle on either side of the canal

I grew up in Ottawa and looking back I feel lucky to have grown up in such a city. Ottawa offers a great mix of culture and recreation. Its home to the National Arts Center which always offers something interesting for the right side of your brain but it’s the easy access to the outdoor life where Ottawa really shines.

In the winter you can skate on the Rideau Canal or cross-country ski in the Gatineau. In the summer you’re never far from cottage country and the cycling is excellent. In fact it was a bike-friendly city well before it became trendy to embrace bikes. Enjoy these 35 fun, weird, interesting facts about Ottawa.

Ottawa is the capital of Canada. It was chosen by Queen Victoria in 1857.

Ottawa was originally called Bytown named for Colonel John By, the engineer who oversaw construction of the Rideau Canal.  In 1855 Bytown was incorporated and became Ottawa.

The name Ottawa comes from the Algonquin word adawe – which means to trade.

Ottawa is located on the banks of the Ottawa, Rideau and Gatineau Rivers.

Facts about Ottawa as it relates to weather

Ottawa is the seventh coldest capital in the world. Others that are colder include in order of coldest first are Ulaan-Baatar in Mongolia, Astana in Kazakhastan, Moscow, Russia, Helsinki in Finland, Reykjavik, Iceland and Tallinn in Estonia.

Ottawa receives an average of 2061 hours of bright sunshine a year. Compare that to Calgary that gets 2,405 hours of sunshine per year – the highest of any major Canadian city.

The people of Ottawa

About 25% of Ottawa residents were born outside of Canada.

In 2016 the median age of the population was 40.1 – making it one of the younger cities in the country.

Ottawa is a multilingual city. Approximately 62.4% of people consider English to be their mother tongue while 14.2% count French as their mother tongue. Other languages spoken include Chinese, Arabic, Italian, Spanish, and Portuguese.

Ottawa has more scientists, engineers and PhD’s per capita than any other city in Canada. In 2021, the city climbed into the top 10 position for ranking of North American talent hubs.

There are 35 major festivals in Ottawa. The Canadian Tulip Festival, held every May, is one of the most famous.

Ottawa ranks as the most educated city in the country.

Ottawa is the fourth cleanest city out of 300 major cities ranked around the world – at least according to Forbes.

Moneysense ranked Ottawa for the third consecutive year as the best city in Canada to live in.

The Federal Government is the city’s largest employer.

Ottawa is the agricultural center of eastern Ontario and has more farmland than any other city in Canada.

There are four universities (Carleton, University of Ottawa, Ottawa University and Dominican University College) along with several colleges including Algonquin.

Ottawa boasts a UNESCO World heritage site – the Rideau Canal. It is the best preserved example of a slackwater canal built in North America. It remains operational along its’ original line with most of the structures from the early nineteenth century still intact.

You might enjoy: 10 Ottawa Activities to Try on a Visit to Canada’s Capital

The Rideau Canal becomes a 7.8 kilometre (4.7 miles) skating rink as it winds its way through downtown Ottawa. Rent skates, and pick up hot drinks and beavertails along the route. One of the best times to go is during Ottawa’s annual Winterlude Festival.

Every Sunday morning – from 9 AM until 1 PM – in the summer only,  the Capital area parkways are closed to cars. You can run, walk, cycle or skate. On the Gatineau Parkways you can do the same thing from 6 AM until noon. This has been going on for as long as I can remember and well before it became trendy for cities to embrace the biking culture. All told there are now 65 kilometres of car free roads available on a Sunday morning.

There are seven downhill ski resorts within easy driving distance of Ottawa.

Ottawa is home to 14 National Museums

The Canadian Museum of Civilization is the most visited museum in Canada.

The Ottawa Little Theater is Canada’s oldest amateur theatrical group. It started out as the Ottawa Drama League in 1913.

Famous people from Ottawa include Paul Anka, Lorne Greene, Alanis Morissette, Dan Ankroyd, Adrienne Clarkson, Tom Green, Peter Jennings, Rich Little, Sandra Oh, Matthew Perry, Shelagh Rogers (who was head girl at Lisgar Collegiate when I was there) and even Tom Cruise  – who went to my high school – but only for a while.

Other posts in the fun, weird and interesting facts series you might enjoy: 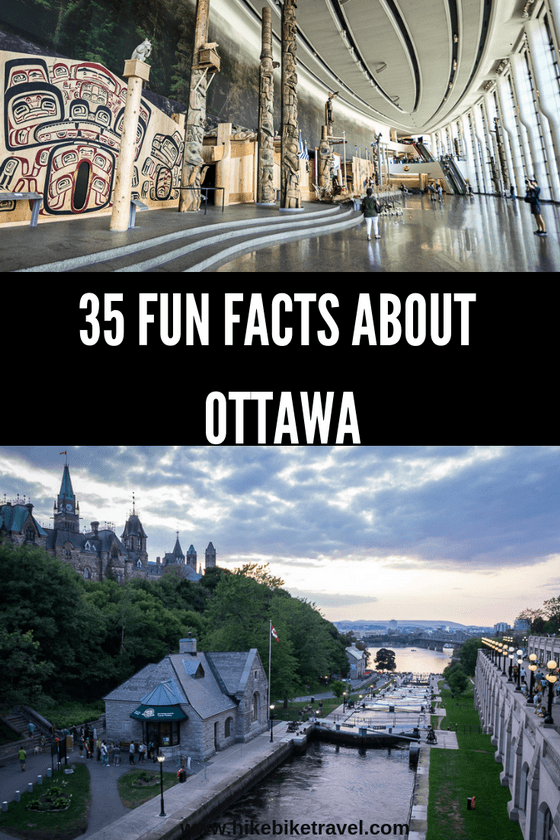