Views of the Inner Harbour in Victoria

30 Fun and Interesting Facts About Victoria

If you were to do a word association game and Victoria popped up what would you think of? I immediately think of tea and crumpets, The Empress Hotel, and the Butchart Gardens. But there’s actually a whole lot more to the city. It’s extremely popular with tourists – probably because it’s such a pretty city with a lot to see and plenty going on.

Restaurants are great and it’s close to a number of wineries too. It’s an outdoorsy place with loads of hiking and biking trails and in the summer the sea kayaking in the nearby Gulf Islands is superlative. For some background on Victoria – a city that’s been called – more British than the British – here are 30 fun and interesting facts about Victoria.

Victoria is the capital of British Columbia. It was incorporated as a city in 1862.

The city is named after Queen Victoria.

Victoria lies on the southern tip of Vancouver Island on the Pacific Coast.

The population of Victoria is 344,615 give or take a few hundred. It’s been called the city of the newly wed or nearly dead. Almost 18% of the population is over 65 years of age.

The median age in Victoria is 43.1 years – about four years older than in metro Vancouver.

Victoria has four sister cities – Napier in New Zealand, Morioka in Japan, Suzhou in China and Khabarovsk in Russia.

Victoria’s Chinatown is the second oldest in North America after San Francisco. You’ll find the Fan Tan Alley – the narrowest alley in all of Canada here.

Approximately 3.5 million visitors spend at least a night in Victoria every year. There are another 50,000 visitors who come for a day only – primarily via cruise-ships.

Victoria is the western terminus of the Trans-Canada Highway.

Victoria is in the rain shadow of Washington’s Olympic Mountains. It ends up receiving on average 608 mm of rain per year. Compare that to Vancouver which receives 1,589 mm. Interestingly Port Renfrew, only 80 kilometres away from Victoria on the coast receives 3,671 mm of rain per year. (Nearly two thirds of Victoria’s precipitation falls between November and February.)

Victoria gets 2,183 hours of sunshine per year and eight months are frost free.

The famous Butchart Gardens, opened in 1904, are only about a twenty five minute drive from downtown Victoria. They can be appreciated in all seasons but they are particularly spectacular in spring. The gardens are seen by over one million people annually.

Victoria has the second highest number of restaurants per capita in North America, second only to San Francisco.

There are over 70 city parks including Beacon Hill Park which boasts vistas across the Juan de Fuca Strait. Beacon Hill Park is also home to the Mile “0” marker for the 8,000 km Trans-Canada Trail.

Victoria’s Inner Harbour is the heart of the city. It’s flanked by historic buildings and sees all sorts of boat and float-plane activity on the water. The Fairmont Empress Hotel, the Royal BC Museum and the BC Parliament Buildings are all in this area.

At night the Parliament Buildings are lit up with over 3,000 lights.

Victoria is the Cycling Capital of Canada – and for good reason. It boasts an extensive system of bicycle paths; in fact you can cycle from the ferry in Schwartz Bay on a bike path all the way to downtown Victoria. Then if you’re energetic you can continue on into Sooke too. Plus it’s easy to make your way by bike to the Gulf Islands.

Victoria is home to the University of Victoria and to Royal Roads University.

You can get to Victoria via ferry (and a drive from the ferry terminal) from Vancouver and Nanaimo. There are ferries from Washington State too – including ones that do a Victoria – Port Angeles run and a Sidney to Anacortes ferry. Float planes come from all over, including regular scheduled flights from downtown Vancouver. And of course there is an international airport that is particularly easy to fly in and out of.

Victoria is in an earthquake zone

Victoria sits in an earthquake zone. The tsunami threat is only considered to be very high if there is a major earthquake in the subduction zone 100 kilometres off of Vancouver Island. That would be the so called BIG ONE.

Forty six percent of people in Victoria walk, ride or use public transportation to get to work.

Victoria is home to numerous festivals including the Victoria Flower and Garden Show, the Tall Ships Festival, the Victoria Marathon, the Great Canadian Beer Festival and the Independent Film and Video Festival – and that’s just a few of them.

Victoria does not have a good reputation related to sewage

Victoria is often criticized because it reportedly dumps 129 million litres of raw sewage into the Strait of Georgia every day. But according to Responsible Sewage Treatment Victoria , that number is far lower and as they say: The Victoria core area sewage is 99.93 per cent water and has very little actual solids. It is discharged from two deep ocean outfalls more than a kilometre from the shore, after first passing through six millimetre screens (screening since 1989). There are no “floaties.” You can get both sides of the story in this article – and it’s worth reading because this has been a hot issue in the city.

Whale watching is a popular excursion out of Victoria. The waters around the city are home to five species of whales.

The annual greater Victoria flower count takes place every year in March. It’s done to showcase what the shoulder season can offer visitors and to show that the city is a “good place to work, live and play.”

There are 16 golf courses in Victoria and another 12 golf courses that are within a 30 km drive of the city. If it’s a mild winter you can play year-round. 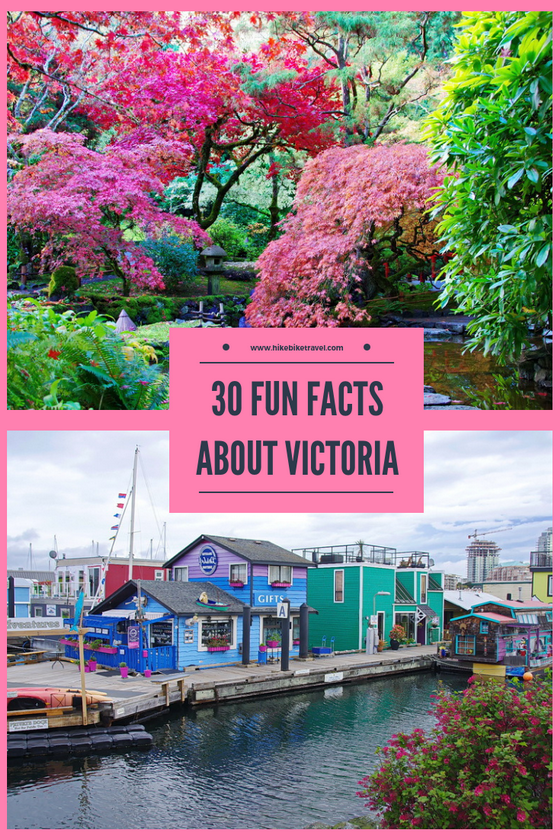