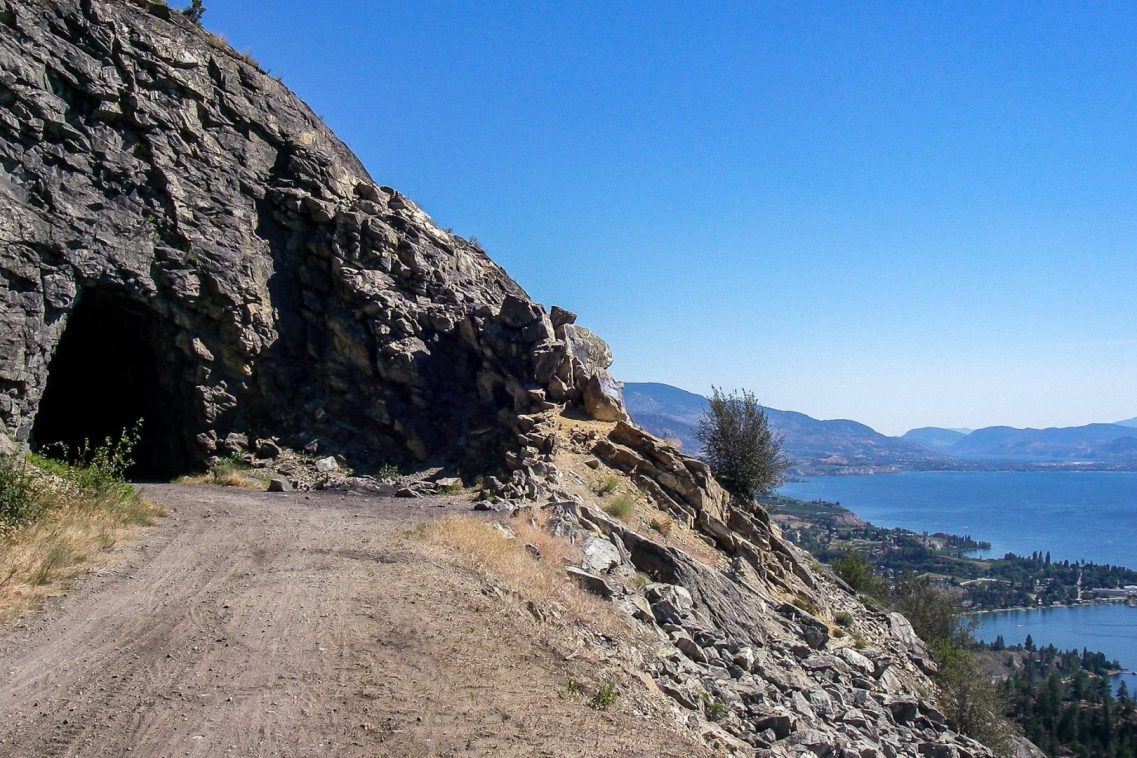 Myra Canyon on the Kettle Valley Railway by Bike

You can also cycle 80 km from Myra Canyon to Penticton

If you’re visiting British Columbia’s Okanagan Valley and you love biking I’d recommend a full day on the Kettle Valley Rail Trail (KVR) or at the very least a bike ride over the Myra Canyon trestles.

The Kettle Valley Railway (KVR) is an abandoned railroad track that winds across the Okanagan and Similkameen region in southern BC. All told it offers over 650 km of cycling. The 80 km section from Myra Canyon near Kelowna through to Penticton is one of the most popular, though it’s the short 12 km (7.5 mi) Myra Canyon section that draws the biggest crowds of all.

The section through the canyon has been termed the jewel of the Kettle Valley Railway Trail. It was out of commission for five years after the 2003 forest fire destroyed 13 of its 18 famous wooden trestles. It didn’t reopen until June 2008 and since then it’s become tremendously popular, drawing up to 100,000 hikers and cyclists annually.

This post includes some affiliate links. If you make a qualifying purchase through one of these links, I will receive a small percentage of the sale at no extra cost to you. Thank you very much for your support.

History of the Kettle Valley Railway

The Kettle Valley Railway’s history date back to the early 1900’s when silver was discovered near Nelson, British Columbia. Years of surveying and building culminated in an official rail opening in 1915.

Where does the Kettle Valley Railway go?

The KVR trail is true wilderness. It winds through the backcountry of southern British Columbia passing through a range of environments including vineyards, orchards, forests, lakes, deserts and mountains.

Small centers are connected via the trail; places like Beaverdell, McCulloch, Chute Lake, Coalmont, and Brookmere which are mere dots on the map and at most have a few places to stay. Tunnels, bridges, wild animals, rattlesnakes, extreme heat and thunderstorms are some of the hazards one might encounter.

The ride through the canyon is glorious. Its gentle grade is easy so you can concentrate on the views including the airiness of some of the trestles. When you reach Trestle #6, the longest and highest trestle on the line, you’re at the midpoint, 55 m (180 feet) above Pooley Creek below.

Absorb the history of the railway too. About a kilometre before Trestle #1 keep an eye out for a rock oven, used to bake bread for the crews building the railway. Loaves were reportedly 2.5 feet long and each worker would eat one a day.

The canyon section is suitable for people with a range of cycling abilities – from families to experts. Cycle over eighteen trestles and through two tunnels over 20 km (12 miles).

Biking from Myra Station to Penticton

If you have more than half a day then I highly recommend cycling from Myra Station to Penticton – a distance of about 80 km. Myra Canyon Bike Rentals organizes self-guided and guided tours.

At about the half way mark Chute Lake Resort appears. Stock up on cold drinks, burgers and homemade apple or rhubarb pie before continuing. Buy extra cold drinks if it’s a hot day. It took the better part of 6 hours to cycle the 80 km and the last two hours were 34°C and dehydration was definitely a problem.

Although it’s downhill all the way from Chute Lake to Penticton, on a railway grade of 2.2%, it’s by no means an easy ride. You have to deal with a great deal of sand which takes a light touch on the handlebars.

Look out for snakes

Watch for rattlesnakes through the Rock Ovens – especially if you’re moving quickly on the downhill.

Shortly after you pass Hillside Winery look for The Trail Store – a perfect place for a summertime cold drink, slushie or ice cream cone, all provided by an incredibly hospitable family!

Getting to Myra Station

It’s a 40 minute drive from downtown Kelowna to get to Myra Station. Although the road up is gravel, the drive shouldn’t present any problems during the summer and fall months. You’ll find a large parking lot at the entrance to the Kettle Valley Railway.

If you want to cycle the entire Kettle Valley Railway then it’s a good idea to purchase the book – Cycling the Kettle Valley Trail by Dan & Sandra Langford. They provide route notes and lots of helpful information though their layout is confusing.

A few things to take on the bike ride

If you plan to bike all the way to Penticton, you do not want to get stuck with a flat tire. Don’t forget a patch kit, a bike pump and tire levers.

Don’t forget a pair of padded shorts – especially for a trip of this length. A cycling jersey with back pockets for storing bars and sunscreen is also recommended.

One of the bike rental companies also contacted me and had this to say:

Some sections of the KVR are truly first class and well worth cycling. In particular you won’t go wrong with the Myra Canyon section.

Further reading on the Okanagan 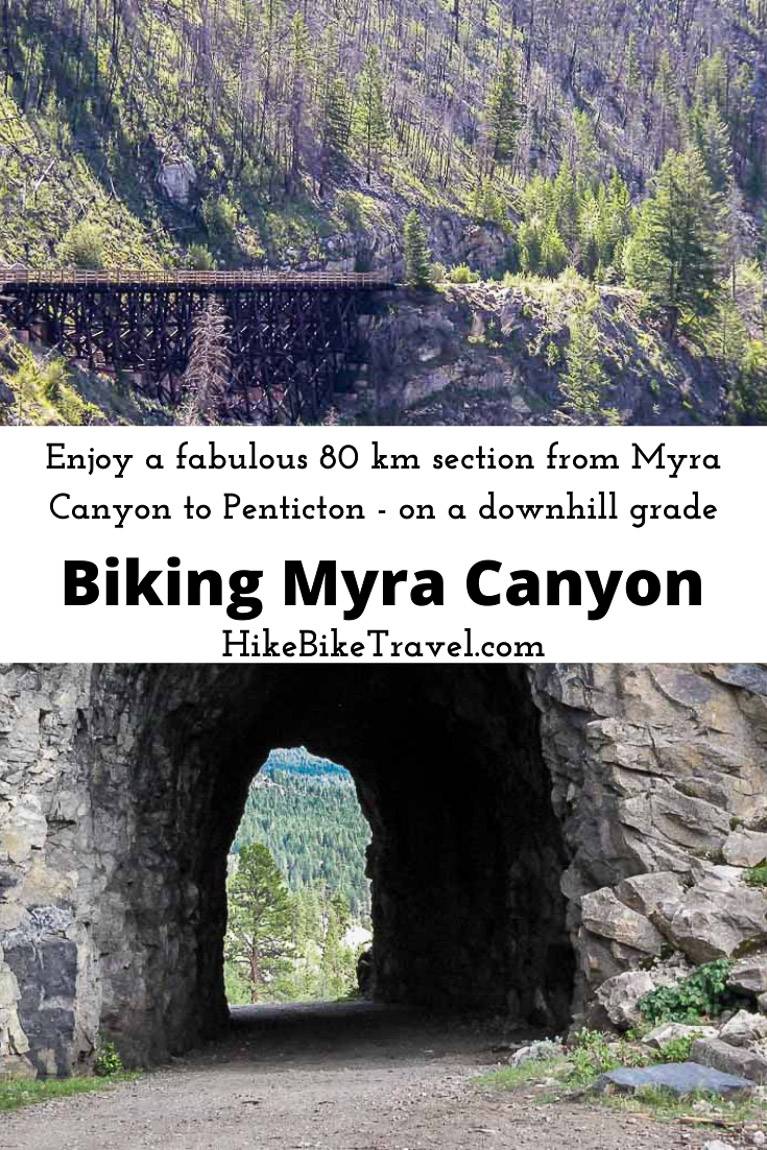