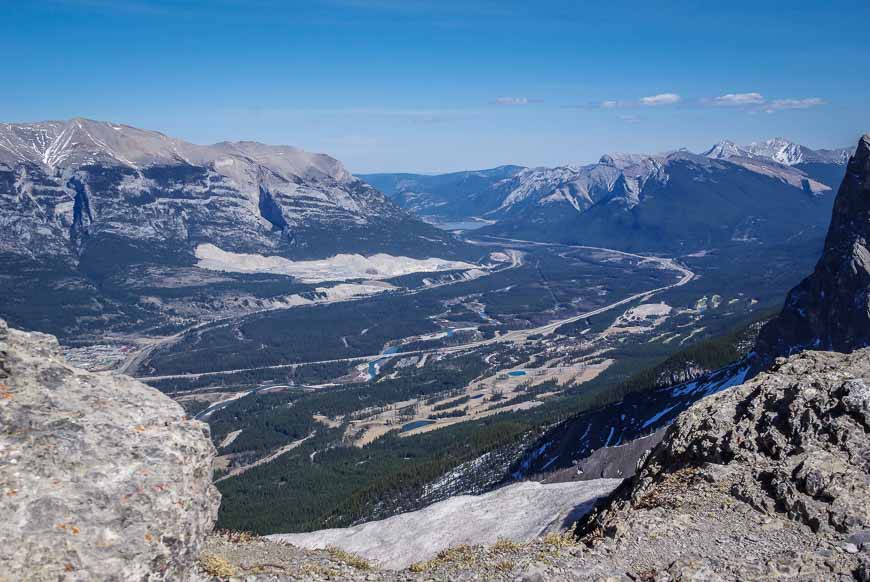 It’s a fantastic hike to the summit of Ha Ling Peak – if you’re looking for a great workout in the mountains that doesn’t eat up the entire day. Ha Ling is an imposing, inaccessible looking peak from any vantage point in Canmore, but the reality once you’re on the hiking trail is very different.

The trailhead for the Ha Ling Peak hike, located just south of Canmore off the Spray Lakes Road, is easy to find and only about a 15 minute drive from downtown.

Ha Ling Peak is not difficult to hike in the sense that there are no fancy mountaineering moves required. But you may be sucking wind, especially if it’s the first hike of the season.

I’m happy I’ve been doing sets of stairs through the winter. Otherwise the 737 metre (2,417 feet) elevation gain would have knocked the stuffing out of me. Even with a decent workout schedule my thigh muscles were telling me today that they’ve been well used.

The hike up Ha Ling Peak is not a long one – just 3.0 kilometres one way from the parking lot. It took us 90 minutes to get to the top – and that included a few short stops, including one to put on “icers’ in the snowy – icy – muddy section.

The first part of the hike reminds me a bit of Vancouver’s Grouse Grind. The trail heads up steeply over roots and through the trees with nary a view and doesn’t lay back on the grade for at least 30 minutes. But when it opens up, it’s impressive and the mountain views just get better and better the higher you go.

Once you hit the snow and ice, the grade moderates but without “icers” it can be a little challenging – though very doable since most people we saw didn’t have more than hiking boots on. We were told on more than one occasion that we were very smart to have brought the right equipment.

Be prepared for snow, ice, scree and rock – depending on the season

After the snow and ice you’ll get into scree and rock. This section took us about 20 – 25 minutes to climb. I kept stopping just to take in the views.

On a warm Sunday in April, masses of people looked like ants on this part of the mountain. Be especially careful with so many people around that you don’t dislodge any rocks – and if you do be sure to yell – ROCK.

Although the top is very airy, with some hair-raising drop-offs along the edge, you’ll have no problem finding a safe place to sit. The views are spectacular no matter where you park yourself. Take heed of the signs asking you to avoid dislodging any rocks over the top as climbers could be on the mountain immediately below.

I’m never a fan of descents on scree so I go slowly. Sure footed people will dispatch with this part of the descent quickly. Once back in the trees I found it much easier to move quickly.

The parking lot is on the right (west) side of the road if you’re driving up from Canmore. But to get to the actual trailhead you’ll have to cross the Smith Dorrien Road and walk up the service road to the canal – a distance of about 50 metres.

Cross the canal on the concrete bridge and look for the sign saying Ha Ling Peak. Start the hike by heading up into the woods.

Things to take on the hike up Ha Ling

Bring lots of water on this hike, especially on a warm, sunny day. If you’ve brought your dog, carry extra water for them as well. Don’t forget the sunscreen and some warm clothes for the top.

If it’s early in the season and there is lingering snow, a pair of Yactrax or other icer devices will make both the ascent and descent easier.

Allow three to five hours to do the return hike, depending on your fitness level and how you handle scree. Allow at least an hour on the top to enjoy the view.

The trail up Ha Ling Peak has  just reopened after 16 months of upgrades. The new trail is now longer with a slightly different shape that will make it safer for a larger number of hikers. A viewpoint has been added along with rails and cable ladders – where according to the Calgary Herald – “the grade couldn’t be reduced.”

If you want a hike that sees a lot fewer people but starts from the same trailhead then do EEOR (East End of Rundle). It’s a bigger workout with an elevation gain of 900 metres (2,952 feet) and near the top there is a little scrambling. You can see the trail in the photo below. 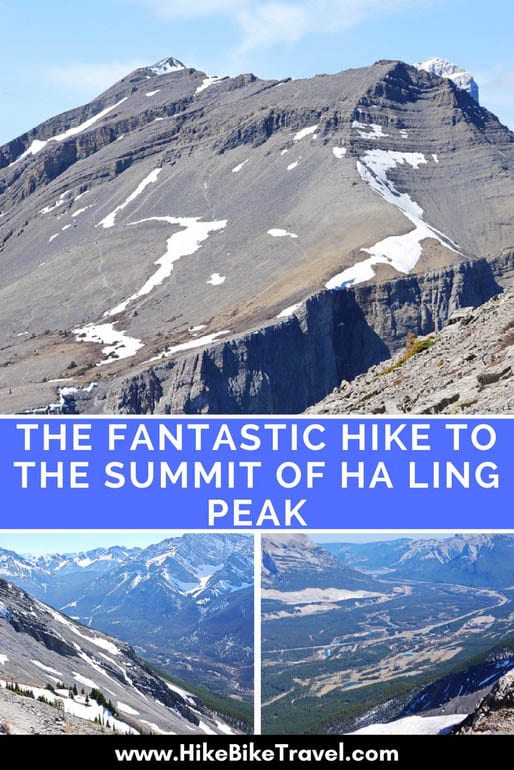 Hiking the Sugarloaf Path on the East Coast Trail

This is a guest post written by my daughter, Kristen McAdam - an adventurous soul…