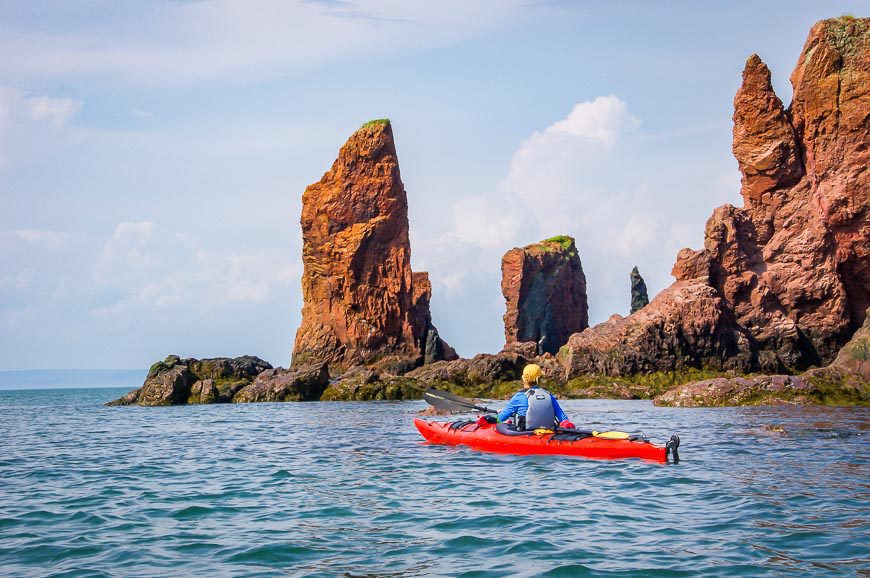 I have lived in Nova Scotia on two occasions in addition to spending a summer working out of Wolfville. When I finally  returned to the province after a long hiatus it was interesting to see and experience it with fresh eyes.

Enjoy these 45 random observations and fun facts about Nova Scotia.

1. People aren’t afraid of a little colour in Nova Scotia. It’s a treat to see something other than beige.

2. The highest tides in the world occur on the Bay of Fundy. That means you have to time your trips by boat with precision or you’ll get left high and dry.

3. You can find homemade butter tarts in almost every café or even gas station you stop at.

4. In Annapolis Royal there is a 9:30 PM candlelit graveyard tour led by Alan Melanson three days a week from June 1st until October 15th. It was fascinating, entertaining, enlightening and one of the highlights (really) of my trip to Nova Scotia.

6. Halifax is the capital of Nova Scotia. It’s home to the biggest population east of Quebec City – 431,479  people at last count. For 26 interesting facts about Halifax click here.

Halifax also is a super interesting city to visit with fascinating things to do like the tunnel tour on Georges Island.

7. Craftiness is alive and well. Over and over again I was surprised at the ingenious items I’d see outside on people’s lawns or gates. Incredible creativity is obvious. The Nova Scotia College of Art & Design is located in Halifax.

8. There are three UNESCO World Heritage Sites in Nova Scotia including Joggins Fossil Cliffs, Old Town Lunenburg and the Landscape of Grand Pré.

9. A stay in some beautiful B&B’s like the one pictured below near Kejimkujik National Park will run you a reasonable $99 in low season and as little as $129 in high season. There are very few places in Canada with such reasonable prices.

10. It was a refreshing change to see so few big box stores outside of the Halifax area. I did notice a few in Kentville but that was about it.

11. There are a lot of used lobster traps for sale. Some are offered for as little as $2.50/trap.

12. There is a timeless beauty to the Peggy’s Cove area. A visit never gets old.

13. The best lobster roll I had was at The Rope Loft in Chester. I savoured every mouthful and went back twice. It’s worth visiting Nova Scotia for the lobster rolls alone.

14. There are a lot of small cars on the road – partly I suspect as a function of the economy and the price of gas. During the COVID-19 crisis the price has dropped to about 66.8 cents a litre but a year ago it was 125.4 cents a litre.

16. Oil and wood are primarily used for heating homes unless you live in the Halifax-Dartmouth area. At one B&B I stayed at they told me they went through 40 cords of wood in a winter.

17. Since 1971 a Christmas tree has been given to Boston as a way of saying thanks for their assistance after the 1917 Halifax explosion. It’s kept lit in the Boston Commons area throughout the Christmas season.

18. In June lupines are everywhere. I never got tired of seeing field after field of them.

19. Nova Scotia is home to two national parks – Kejimkujik and Cape Breton Highlands. Kejimkujik has two locations – an interior one and one on the coast.

20. Wineries have taken off in Nova Scotia. There are wine tours galore – especially in the Grand Pré and Bear River regions.

21. People in Nova Scotia still hang out their laundry to dry; I think that’s great. What a treat it is when you get to a place and sleep between sheets dried by sea breezes.

22. There are some glorious deserted homes that harken back to another era. Some of them look haunted.

23. Backroads are in abysmal shape. On the paved road into Thomas Raddall Provincial Park I had to stay in the grooves or I would have bottomed out. Even the highways have some major potholes.

24. Churches are in great abundance. Some small towns boast three or more churches in just a few blocks – cue Mahone Bay. Most are white and black.

25. Parks are almost deserted in June so it’s a great time to visit. I felt like I had the whole of Thomas Raddall Provincial Park to myself one night. I saw one other vehicle.

26. Nova Scotia – which means New Scotland is the second smallest province in Canada.

27. Some of the most out of the way places have the most incredible food. I think the winner from my experience is the Lighthouse at Cape d’Or.

People I met elsewhere swooned in their description of his lunchtime grilled cheese sandwiches.  And if you’re in nearby Advocate Harbour don’t miss Wild Caraway – a place where I had a giant piece of fresh halibut for $20 – after a three day solo backpacking trip eating granola and peanut butter.

Nova Scotia has more lighthouses than any other province

28. There are so many lighthouses all over the province – 185 to be exact – that I’d be hard pressed to pick the prettiest. I sure loved the feeling of desolation though at the one at Cape d’Or. You can stay in the Lightkeeper’s Cottage – an experience I’d highly recommend.

29. Inland Nova Scotia – Kejimkujik National Park excepted – is relatively uninteresting though there are lots of people in Nova Scotia that wouldn’t agree with me. It’s heavily forested. Stay to the coast for the scenery – and to avoid the bugs.

30. Kayaking is superb in Nova Scotia – though more challenging than I expected. The half day guided trip to the Three Sisters off Cape Chignecto will thrill you with its beauty. It’s a great way to see the tides of the Bay of Fundy in action.

The Cabot Trail is one of Canada’s most beautiful drives

31. Don’t miss a drive of the Cabot Trail – or if you’re feeling adventurous try biking it over five to six days. If you want to see a moose, head for the Skyline Trail in Cape Breton Highlands National Park.

32. Bear River is a small town where some of the stores/houses are built on stilts because of the tide. This might be an idea for those people in Calgary living along the river.

33. The memorial to Swiss Air Flight 111 where 229 people perished in the cold Atlantic Ocean on September 2nd, 1998 is very moving – still after all these years.

34. There are some beautiful plants in the seaside Kejimkujik National Park including these pitcher plants that I’ve seen nowhere else but in Nova Scotia.

35. Strawberries are in season in June and July and judging by the number of towns I traveled through there are a lot of strawberry socials on the calendar.

36. The Cape Chignecto Coastal Trail seems to be deserted on weekdays in June. It offers incredible beauty with its fog forests and huge cliffs. Enjoy superlative views of the Bay of Fundy.

37. You can get a big glass of wine in restaurants for $5 – and I’m not talking gut – rot kind of wine here. What a treat to pay those kinds of prices.

38. Teenagers in Nova Scotia are the same as anywhere else I’ve been.

39. You make think you’re in Scotland when you go into cafes looking for food. Oats are big – and oatcakes seem to be de rigeur as an offering.

40. There were glorious fields of flowers, especially in the Wolfville – Halls Harbour region.

41. Walk into a general store and you might just find the local ladies all playing bingo. You feel like you’ve stepped back in time when the internet didn’t exist.

42. You can get amazing bowls of fish chowder in the most unlikely looking places – this one from The Deck – on a rural road near Hubbards.

43. Biking is excellent around Annapolis Royal – and along the south shore. I found drivers to be extremely courteous – which is a good thing since there weren’t any shoulders 90% of the time.

44. One of the fun facts about Nova Scotia is that the houses in Lunenburg are colourful, beautiful and loaded with architectural details. In fact Lunenburg is a UNESCO site because it’s the best “surviving example of a planned British colonial settlement in North America.”

45. The people I ran into in Nova Scotia were unbelievably friendly – and very proud of their province. It was a breeze to be traveling solo – and surprisingly social, especially if you stay in B&B’s. And there are B&B’s everywhere. 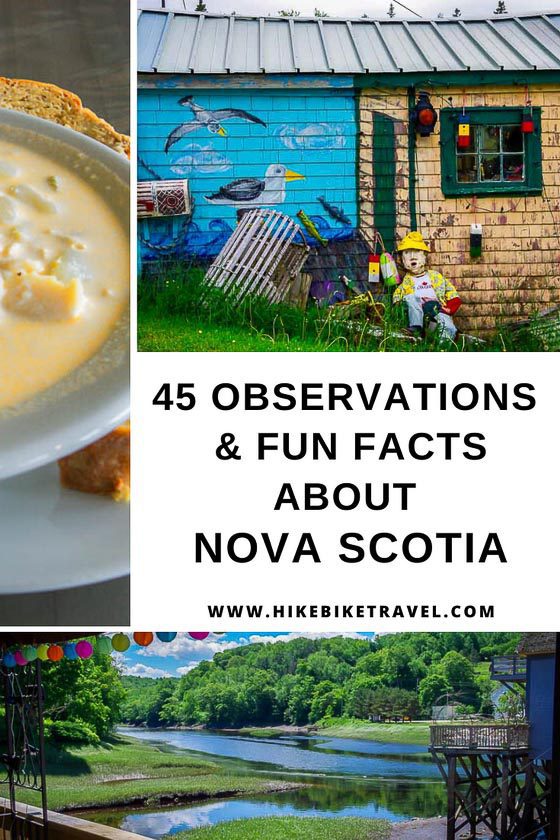