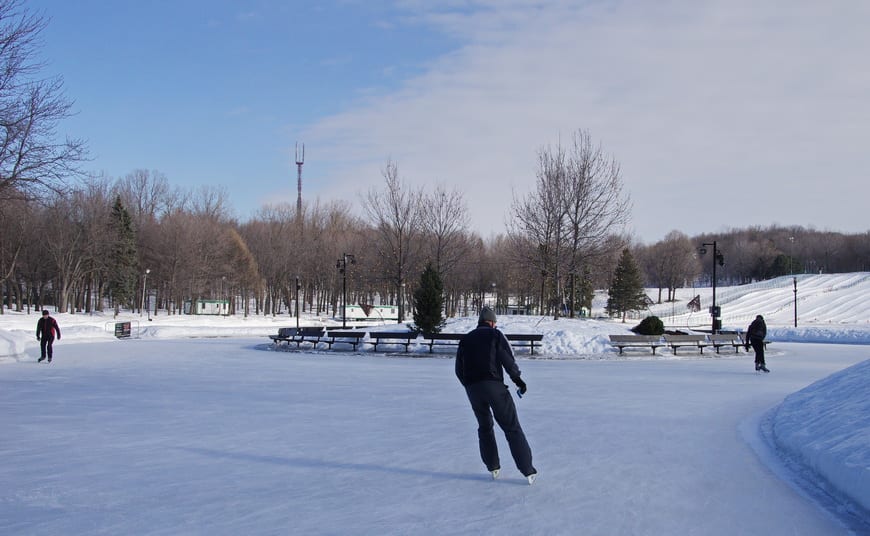 Skating to music on Beaver Lake in Mont Royal Park

Montreal, Quebec is a dynamic city with a great vibe. It’s a city I’ve visited on numerous occasions but I’ve never had enough time to just lose myself in it for days at a time. It’s brimming with culture and festivals, amazing food and lots of outdoor activities. Plus it has an enviable location – at the confluence of the St. Lawrence River and Ottawa Rivers – and it’s within easy driving distance of both the Laurentians and the Eastern Townships.

Here’s a look at 36 fun, weird and interesting facts about Montreal – in case you’re a trivia nut or you’ve got Montreal in your sights sometime soon.

Montreal has a long human history stretching back over 8,000 years. It wasn’t until 1535 that the first European – Jacques Cartier – laid eyes on what is today Montreal. Then 70 years later Samuel de Champlain set about creating a fur trading post. In 1642 the first real colony named Ville Marie was established.

Montreal was incorporated as a city in 1832.

The Hochelaga Archipelago, also known as the Montreal Islands sit at the confluence of the St. Lawrence and Ottawa Rivers. There are over two hundred islands, the largest being the Island of Montreal; it forms the main city of Montreal.

Montreal is the second largest city in Canada. It was the largest city until sometime in the 70’s when Toronto took over the title.

Montreal is one of the five largest French speaking cities in the world. Paris is first.

Montreal has a flag with five symbols. The cross represents Christian principles. The fleur-de-lis is for the French, the shamrock for the Irish, the thistle for the Scottish and the Lancastrian rose for the English.

Montreal has the highest number of restaurants per capita in Canada and the second highest in North America after New York City.

Montreal is a UNESCO city of design. (Others in that category include Kobe, Shanghai, Seoul, Graz, Berlin, Nagoya, Saint-Etienne, Buenos Aires and Shenzhen.)

No building in Montreal can be taller than the cross on the Mount Royal Mountain.

There are nine bridges surrounding the city of Montreal.

The Montreal Subway has 68 stations over four lines.

On average it snows 60 days a year in Montreal. It rains on average every month of the year too.

There are on average 24 thunderstorms per year in Montreal.

The Underground City – a series of interconnected tunnels beneath Montreal runs for over 32 kms (20 mi). In the winter over 500,000 people use the tunnels on a daily basis. The tunnels connect shopping malls, museums, universities, hotels, banks, offices and seven metro stations.

Montreal is home to the world famous Cirque du Soleil.

Montreal was home to the 1976 Summer Olympics. They were the first Olympics ever held in Canada.

Montreal played host to Expo 67 – considered to be the most successful world’s fair in the twentieth century. As a kid I remember going twice and having a great time checking out all the country pavilions and tasting their food. It helped ignite my passion for travel – at the age of 10.

Habitat 67 was built as a pavilion for Expo 67. Conceived by architect Moshe Safdie it is one of the most recognizable buildings in Montreal. It is comprised of 354 identical prefabricated concrete forms arranged in various combinations up to 12 stories high. There are now 156 residences – many with multiple forms – and all with at least one private terrace.

There are 11 university level institutions in Montreal including four that are world-class. Students pay some of the cheapest tuition in Canada.

John Lennon’s song – Give peace a chance – was written in Montreal during a Bed-in at the Queen Elizabeth Hotel on June 1, 1969.

Montreal has a vibrant summer festival scene. The Montreal Jazz Festival, starting on June 28th is the biggest of its kind in the world. The same can be said for the Fireworks Festival. And don’t miss Just for Laughs in July. If you’ve ever seen some of their pieces on TV you know you’ll be in for some deep belly aching kind of laughter.

Igloofest in Montreal is a huge outdoor dance and music festival in January and February. No matter what the temperature, thousands of people show up in the wildest of outfits.

There are more than 350 kilometres of bike paths in Montreal.

Come winter over 200 kilometres of cross-country ski trails can be found in the city. Parc du Mont-Royal is one of the best known ones.

Read: 10 Things to do in Montreal in Winter 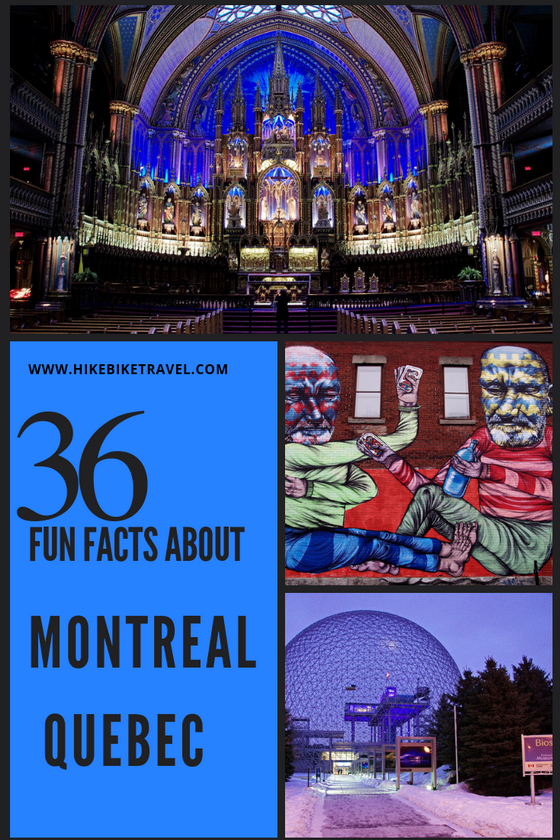