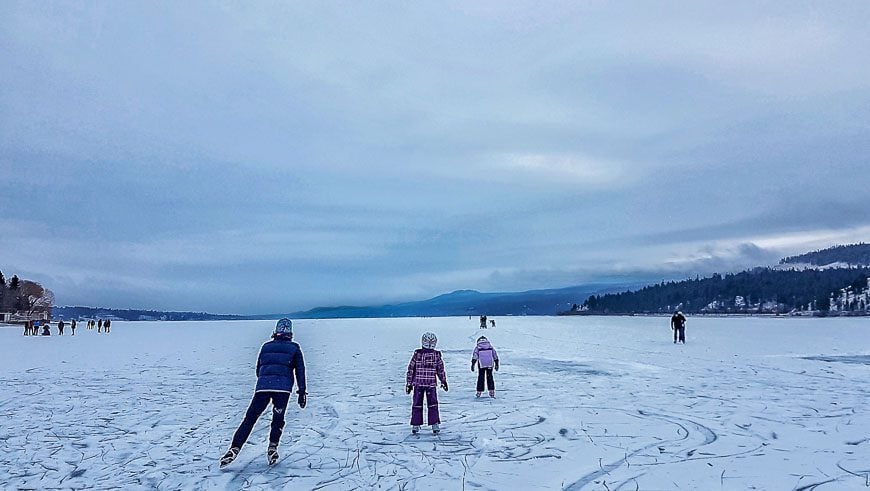 It’s worth the winter drive through Kootenay National Park just to enjoy the activities on the Lake Windermere Whiteway. Spend a weekend to take advantage of the exceptional skating and cross-country skiing.

The longest natural frozen ice skating rink in the world

By the time December rolls around and Lake Invermere is frozen solidly, the Toby Creek Nordic Ski Club goes to work.

A six metre wide path of ice is cleared around the circumference of the lake. When they started back in 2008, only a 15 kilometre loop was cleared. Now it’s the whole lake and it’s officially 29.8 kilometres (18.5 miles) long. The snow is moved to one side of the cleared ice – and it’s that snow that becomes the base for skiing. The snow is track-set but there’s also enough room for skate skiers.

The Whiteway is a superb family-friendly outing

You can do short or long loops on skates and skis and you can even bring the dog. On a sunny day, the view of the mountains from the lake is outstanding. Skaters and skiers in great shape can knock off the full loop in about two hours.

In recent years in early winter some people have been treated to mirror smooth ice, so clear that you could see fish swimming below.

Biking on the Whiteway

Mountain biking is also permitted on Lake Windermere, but because of the wind chill, it’s a good idea to bring extra face protection.

Cars and trucks are also allowed to drive on the lake, but they are forbidden from using the Whiteway. It appears that ice fishing is popular but only at the northern end of the lake.

The cost is minimal – a mere $5 donation to the Toby Creek Nordic Ski Club if you aren’t a member. Look for cash boxes at information kiosks.

Entrances to the Lake Windermere Whiteway

There are three official entrances; the Kinsmen Beach in Invermere, by the Invermere Bay Condos in Invermere and at Windermere Beach. Invermere is located 275 km (171 mi) west of Calgary and 17 km (11 mi) south of Radium Hot Springs.

When is it open?

The season varies from year to year. Typically, it runs from late December until early March. The Whiteway is not lit at night but in theory it’s open 24 hours a day.

Where to stay in Inveremere

On one occasion I stayed at the Copper Point Resort in winter and thoroughly enjoyed it. It’s one of the nicest places to stay in the Invermere area.

The Kanata Inns Invermere is called a superb choice. If you like soaking in hot springs then the Fairmont Hot Springs Resort 13 kilometres south of Invermere is a great choice.

Further reading about things to do in British Columbia in winter 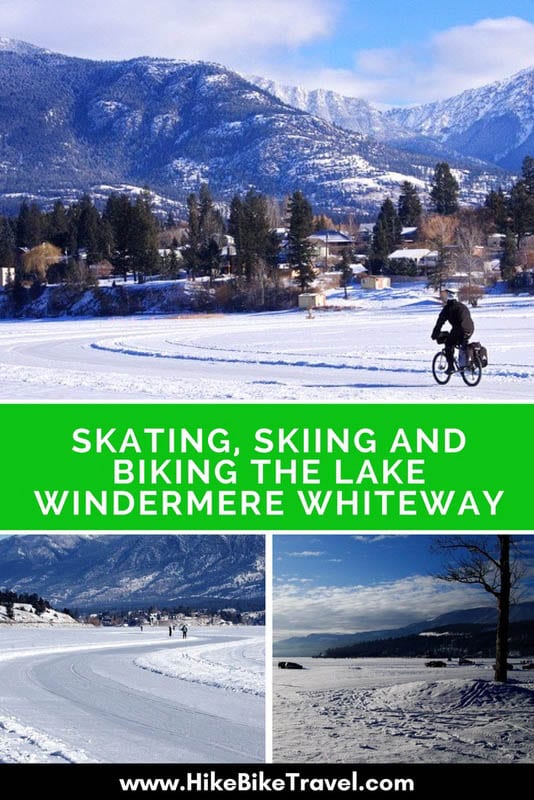 What to Do in Kootenay National Park in Winter

Kootenay National Park, located in southeast British Columbia, is one of four national parks that…

British Columbia is a dream destination for hikers and backpackers. The geography of the province…